In this continued reading of Chapter 6, you will be focusing on the way that we account for time in solar energy and the relation of time to more spherical angles. We will use those angles to later calculate the estimated irradiance and irradiation conditions just outside of the Earth's atmosphere (called Air Mass Zero: AM0).

Pay attention to the use of solar time vs. watch time (which will be expressed as standard time vs. daylight savings time). In solar simulation tools like SAM (System Advisor Model), we will only be using solar time, which is the industry norm. Watch time is just a convenient way to get everyone to work at the same time, and to coordinate conference calls. Your job is to get out of watch time and into thinking in terms of solar time, and the angles those times represent.

As we see in the reading, time is a critical parameter in solar energy resource assessment, and we use a "different" time from your mobile phone (or if you have one, a watch). The time that we use in solar energy is the apparent time and path of the sun relative to the aperture or collection device, called Solar Time.

The time that you are used to using on your laptops, phones, and (if you still have them) watches is called Standard Time, and is referenced back to the Coordinated Universal Time (UTC), the primary time standard by which the world regulates clocks and time.

Our notion of time is also tightly coupled with our system of longitude (the longitude symbol for us is ). We have used lines of longitude, or meridians as a reference for time and position E-W. Because time and angles are all linked together, we cannot escape the sexagesimal (base 60 math) system for geographical locations. As we demonstrated earlier in the lesson, each standard meridian (a major line of longitude) is spaced 15° apart, beginning with the Prime Meridian () in Greenwich, England, and continuing for 360 degrees, or 24 hours.

I live someplace other than Greenwich. How do I account for Longitude ()?

Your standard time zone will tell you the standard meridian (). For example, the EST is -5h from UTC, while Central European Time (CET, like Paris) is +1h from UTC.

Answer the following questions for yourself. If you have any questions, please post them to the lesson 2 discussion forum.

Where you live, or where your future solar site assessment will occur, will likely be well within the edge of a time zone (meaning ). We already learned that every 1° of angular rotation on Earth is equal to 4 minutes of time. Standing in one spot on the surface, this means 4 minutes of relative time correction locally per degree of deviation from a Standard Meridian ( ). So, locales will have a local longitudinal refinement to account for, in order to account for not living directly on a 15-degree incremental Standard Meridian on Earth.

There are a few other cities that actually are well seated for solar time zone correction (close enough for our calculations):

My client lives someplace other than a Standard Meridian, how do I account for that?

First, go to Google and type "<insert city name> longitude". You should get a quick response of both the Longitude (lambda) and the latitude (our symbol for latitude is lowercase Greek "phi": phi), represented in decimal form (more useful to us for trigonometry and angles).

Correcting with the Equation of Time: Accounting for Wobbles

Even in Greenwich, where no longitudinal correction is necessary, "noon" UTC will generally not be the time when the sun is directly overhead. We can see in the plot below that watch time and solar time are the same in Greenwich for only 4 days in the year.

As you will have read, our interpretation of watch time assumes an even progression for Earth's planetary rotation, with no weebles or wobbles or precession of the polar axis. However, you will now know that wobbling occurs, and there is great variability in the rotation of the earth throughout the months of the year. This is why we add leap years and leap seconds to our calendars. So, we create a "mean time" based on the length of an average day to keep things simple. Solar time has to correct for this mean time approximation. Equation of time correction versus day of the year is shown in Figure 2.7. As an exercise, you can try to calculate these curves based on the empirical equations (6.10) and (6.11) in Brownson textbook. 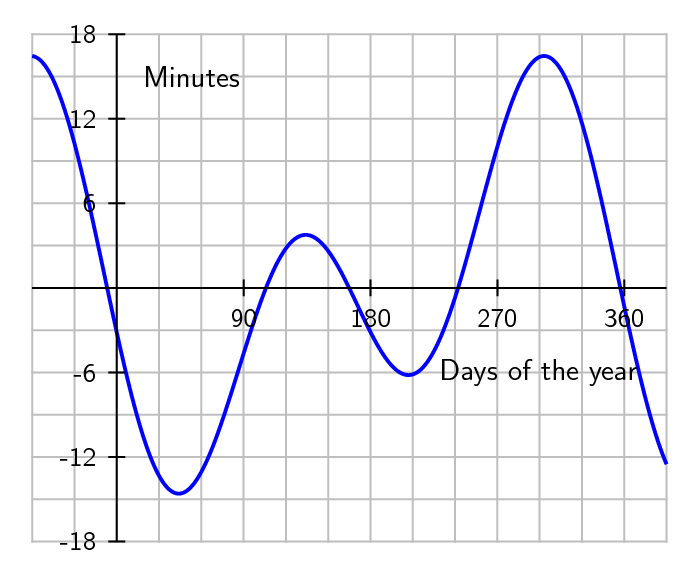 Figure 2.7: Equation of time function represented over all the days of a year. Note how the minimum and maximum do not exceed 16 minutes.
Credit: Jeffrey R. S. Brownson © Penn State University is Licensed under CC BY-NC-SA 4.0

The following picture was a composite of images, taken at the same watch time every few days for an entire year to record the position of the sun. We call the shape an analemma. Notice how there is a big loop and a little loop, and compare the same big waves and little waves in the first image of the Equation of Time correction above. If you were to draw a line down the center, you would have removed the error from watch time, and you would be one step closer to solar time. 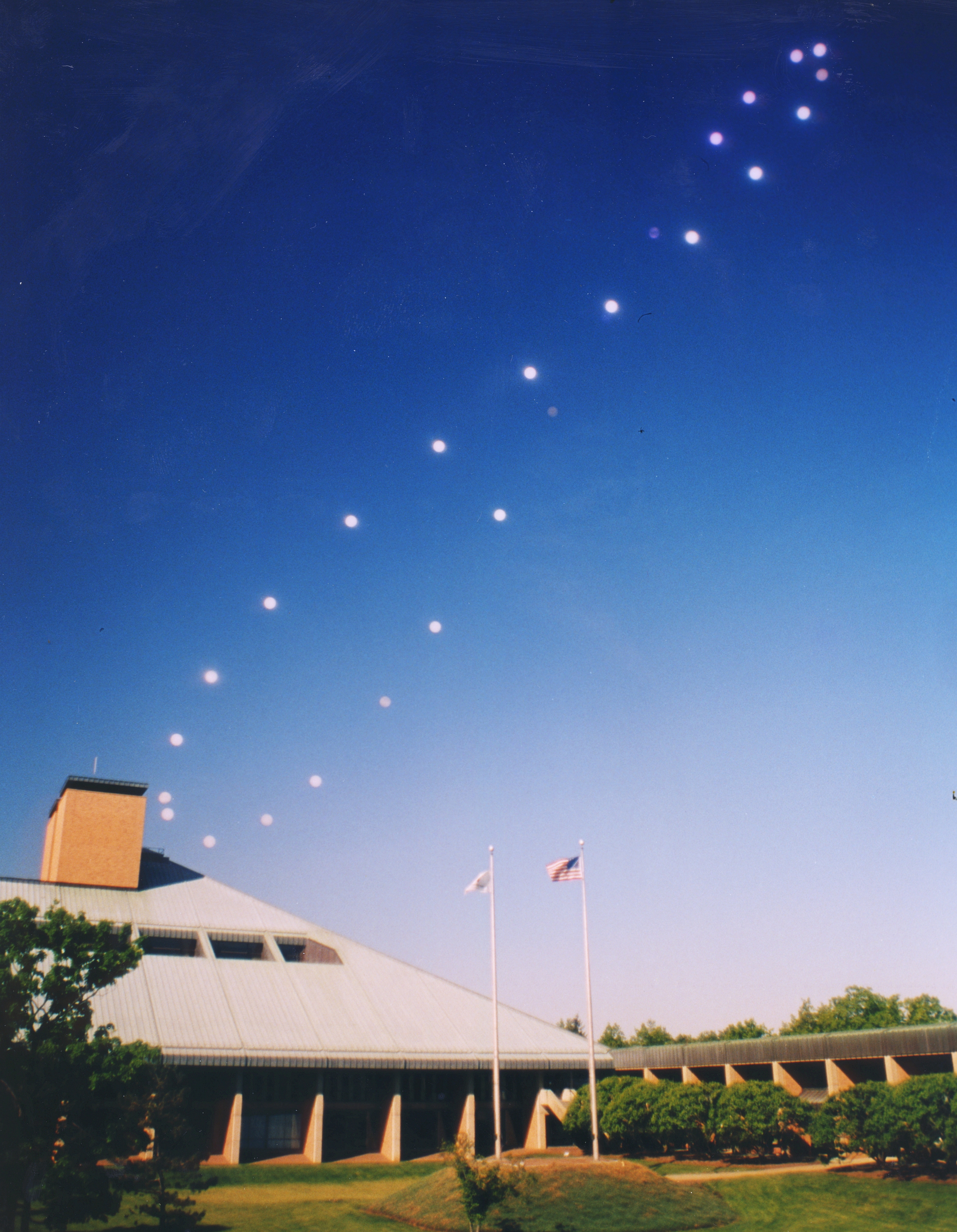 These images were taken at the same time and location every day for one year. You will see the curve described by the Sun over that year. An analemma is a beautiful way to capture both the range of declination $\delta$ (along the length of the analemma) and the Equation of Time Et (the expansion or width of the analemma) in a graphical format.

As we have seen in the reading, we have a method to correct local watch time to solar time, to correct for the true time of day according to the sun relative to the meantime.

The time correction factor is a function of the equation of time, the meridian of the local standard time zone (Lst), and the longitude of the collector/observer (Lloc), and the Equation of Time (Et). The equation of time correction accounts for the wobble and is the first step. Then we need to correct for the change in longitude leading to time zones (standard meridians occur every 15 degrees) and the change of time for locales that are not located along standard meridians.

In these conversions, each year is assumed to begin just after midnight, Dec. 31, and time counts up from there. The time corrections here are in terms of minutes, not hours. The Equation of Time corrects the time to mean solar time (by adding or subtracting up to 16 minutes of correction). The Time Correction Factor corrects time for your shift in Latitude from each Standard Meridian (which occurs every 15 degrees away from the Prime Meridian). Daylight Savings Time is an optional correction, as there is a +60 minute difference from Standard Time between March and November in the USA (and some other regions of the world).

‹ 2.4 Earth's Tilted Axis and the Seasons up 2.6 Let's Convert Solar Time to an Angle ›
EME 810: Solar Resource Assessment and Economics