There are different types of photovoltaics, some developed long ago, and others that are relatively new. Descriptions below provide a brief overview of a few well-developed PV materials. As you read through, please also open the links within each paragraph to get more information about each technology.

Thin film photovoltaic cells are produced by depositing silicon film onto substrate glass. In this process, less silicon is used for manufacturing compared to mono- or polycrystalline cells, but this economy comes at the expense of conversion efficiency. Thin-film PV have efficiency of ~6% versus ~15% for single crystal Si cells. One way to improve the cell efficiency is to create a layered structure of several cells. The main advantage of the thin-film PV technology is that the amorphous silicon can be deposited on a variety of substrates, which can be made flexible and come in different shapes and therefore can be used in many applications. The amorphous silicon is also less prone to overheating, which usually decreases the solar cell performance. Amorphous silicon is most developed among the thin-film PV. (Solar Facts and Advice: Thin Film, 2013)

Figure 4.9, below, shows the trend of development and commercial implementation of different types of silicon PV technologies. There is no clear domination of a specific type of silicon substrate, as they all present a trade-off between cost and efficiency. 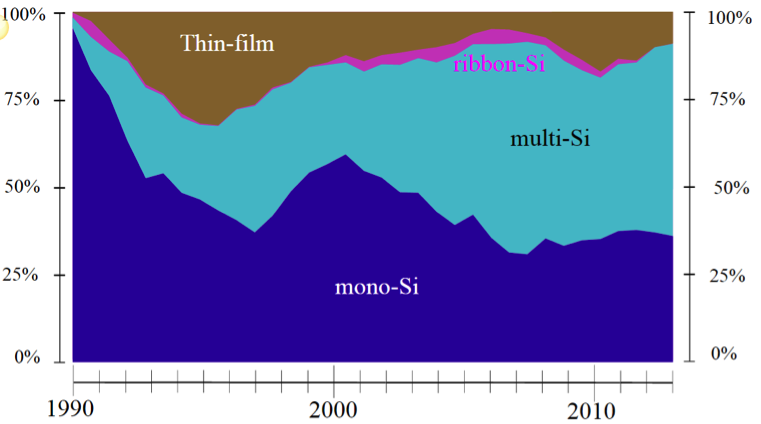 CdTe PV are another kind of thin-film solar technology. It has become quite popular due to the lower cost per kW-hour. The best efficiency obtained with CdTe cells is around 16%. One of the advantages of the CdTe cells is that they capture shorter wavelengths of light than silicon cells can do. There are some environmental concerns related to the limited supply of tellurium and potential toxic impact of cadmium at the stage of CdTe panel disposal. Developing effective closed-loop recycling technologies can be a game-changing factor in favor of this technology. (Solar Facts and Advice: Cadmium Telluride, 2013)

CIGS PV have become a popular new material for solar cells, as it does not contain toxic Cd, and has higher efficiency (just under 20%). At this moment, the CIGS are the most efficient among the thin-film PV technologies. While lab results confirmed high promise of this kind of photovoltaics, the mass production of CIGS proved to be a problem. The CIGS cells are manufactured by thin film deposition on a substrate, which can also be flexible (unlike the silicon cells). Similar to CdTe cells, the CIGS cells demonstrate good resistance to heating.

Organic materials are quite attractive since they can be involved in high-output manufacturing and also because they can be made in various thicknesses and shapes. These types of cells are relatively lightweight (compared to silicon cells). Also, they offer flexibility and relatively low fabrication cost. They, however, are much less efficient (about 1/3 of a typical Si cell efficiency) and sometimes prone to quicker degradation (shorter service life). More technical details about this type of PV technology can be read in this Wikipedia article: Organic Solar Cell.

These are a few most well-known varieties of PV technology, but there are many more innovations that are at the research and development stage. Breakthrough in new materials and cell design may be responsible for the growth of the PV industry in the upcoming decades. For this lesson discussion forum, you will be asked to do a search of recent innovations and share a quick synopsis of one that you believe especially interesting.