Unlike linear concentrating systems (troughs), which reflect light onto a focal line, the central receiver systems send concentrated light onto a remote central receiver. A typical example of such a system is a solar power tower system, which consists of multiple tracking mirrors (heliostats) positioned in the field around a main external receiver installed on a tower (Figure 7.2). Such systems are capable of reaching of much higher levels of concentration than linear systems. Concentrated radiation is further used as heat to produce steam and convert it to electricity (like in a regular power plant), or the generated thermal energy can be stored in a molten salt storage. 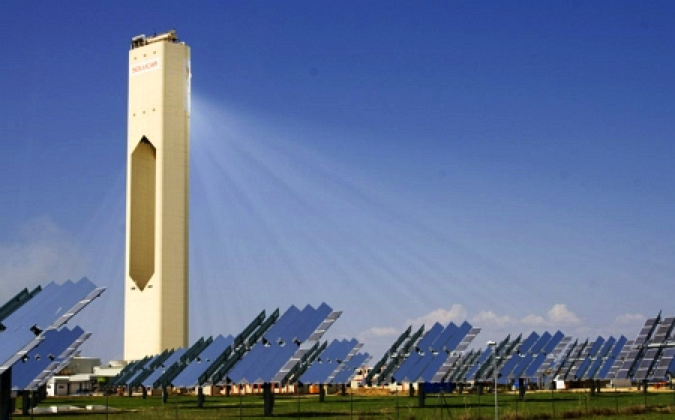 Please proceed further to the following chapter reading, which covers some basic configurations and design of the central receiver CSP technology, approaches used to convert and store energy, specifications of the heliostats and receivers utilized in some known facilities of this type.

It is clear that central receiver CSP systems are typically large-scale plants that are usually built to power a steam cycle. The central position of the receiver offers a universal advantage to collect all energy at one location and save on transport networks. At the same time, the fixed position of such a central receiver results in limitation of light collection: heliostats are always oriented at an angle to the direct beam, so the amount of energy collected is less compared to a parabolic concentrators. Therefore, to reach the necessary efficiencies of light concentration, the size of the collecting field is increased, which brings into considerations such issues as land use, higher environmental impacts, and higher capital costs. Significant potential for developing large-scale central receiver solar plants is hence attributed to deserts and flat arid areas which have plenty of sunshine and lower land value with respect to other applications and industries.

Question 6. Can you name and explain the three main configurations of the central receiver CSP systems?

Question 9. What are the insolation requirements for a good central receiver CSP facility?

Question 10. What are most typical options for heat transfer fluids at the central receiver CSP plants?