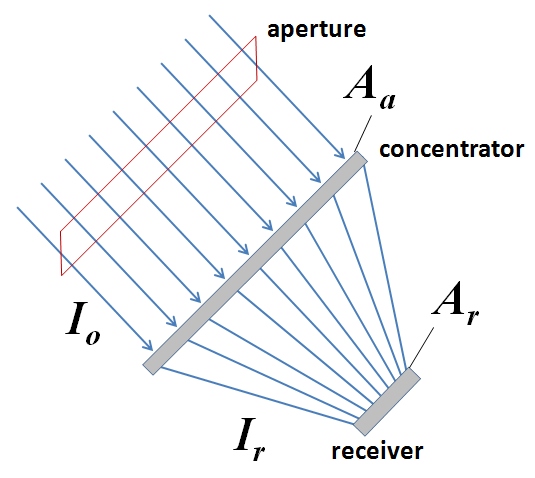 In case the ambient energy flux over the aperture (insolation) and over the receiver (irradiance) is uniform, the geometric and optical concentration ratios are equal (Cgeo = Copt).

where I(y) is determined for any local position y from the center of the produced image, and Iap is the intensity of the incident radiation at the aperture.

Figure 2.5. Example of distribution of local radiation intensity over the receiver of an imaging collector.
Credit: Mark Fedkin after Duffie and Beckman, 2013

In many typical cases of imaging concentrators, the reflectance of the surface (ρ), i.e., the fraction of light radiation reflected from the surface compared to the total incident radiation, is also taken into account. Then the local intensity of the concentrated light, I(y), can be described as follows:

Further in this lesson, we will study some examples that use this equation to estimate energy distribution within a concentrated image on the receiver. It would be better to have a specific type of a concentrator to apply these concepts. Please read through the following text to enforce your understanding of the concentration ratios.

The above-referenced sections of the book in part repeat some of the material given here, but may give you more extensive commentary on the basics and probably provide deeper insight how concentration ratio is influenced by other parameters of the system.

After you have completed the above reading assignment, please answer a few self-check questions below.

When are the optical and geometric concentration ratios equal?

If the radiation intensity is distributed unevenly within an image produced by an imaging collector, what parameter is typically used to characterize the concentration performance?

‹ 2.2 Types and Elements of Concentrating Collectors up 2.4 Concentration with a Parabolic Reflector ›
EME 812: Utility Solar Power and Concentration