Computers have made it possible for geographers to deal with complicated dynamic behavior models. Still, the basic operative concept is relatively simple. For example, it is reasonable to assume that if a place offers lots of jobs, if it is well served by good roads and other means of transportation, and if it offers a reasonable level of other amenities, it will probably grow in population and economically. The opposite is also true. Take away jobs, and expect the population and economic activity within a community to drop. On the other hand, there can be too much of a good thing. Sometimes, communities become victims of their own success. More industry will indeed create more jobs, leading to population growth. As communities grow however, they often become more polluted, and less desirable as places to live. If growth is not well planned, things can become chaotic. This in turn might lead to a decision by businesses to locate somewhere else (consider Detroit’s history over the last fifty years). 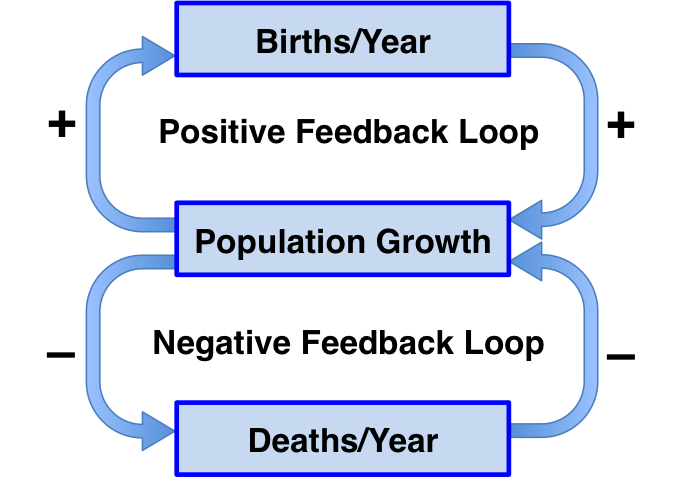 Modern communities are in large part the result of the balance they have been able to achieve relative to positive and negative forces. Keep in mind, what might initially seem to be a positive, may eventually become a negative; hence the old adage; moderation in all things.

In order to test the validity of negative and positive feedback loops, consider a venerable rural landscape that contains eight small communities or points that are equal in population. As time goes by, the population of each point changes naturally by either growing or declining. Therefore, after a few years, some communities become a bit larger than others. The natural growth phenomenon is actually accounted for in this model as a stochastic element (things that happen by chance; “stuff happens”). After all, it is not possible to predict (nor fully control) with precision the number of births in a given community in a given year, nor is it possible to predict exactly how many members of a community might die in a given year (of course there may be exceptions to this statement). Therefore, in a rural landscape of eight small communities, change is generally slow and normally amounts to little. Typically, in a rural region such as the one described above, several places may experience growth over a period of a few years, while others may decline. After a while however, this trend may be reversed, and some of the towns that grew may decline, while some of the towns that lost population, may grow. In most cases, stochastic shock accounts for all of this.

Eventually however, something happens (either by chance, or by purposeful human action) that causes the population of one or two of the communities to permanently grow. Once that occurs, a snowball effect is likely. As a community grows, demands for goods and services also grow. Additionally, the labor pool gets larger, and the tax base expands. A growing population, if it is well supported by a decent infrastructure and good government, will bring about additional employment in construction, education, medical services, retail outlets, drinking establishment, churches (in order to seek redemption for behavior in the drinking establishments), streets, and perhaps manufacturing.