Speaking of businesses making money, in simple terms, there are two fundamental quantities a business needs to know to determine if they are making or losing money: how much money is going into the budget (revenue) and how much is going out (expenses). If revenue exceed expenses, then the business makes money. If costs exceed expenses, the business loses money. A business cannot lose money forever. Eventually, it will not be able to sustain itself.

The same principle applies for most natural resources in two fundamental ways:

Lesson 3 provides a lot of examples of the symptoms of overuse of natural resources, but for now, I'd like you to reiterate these two following basic truths: 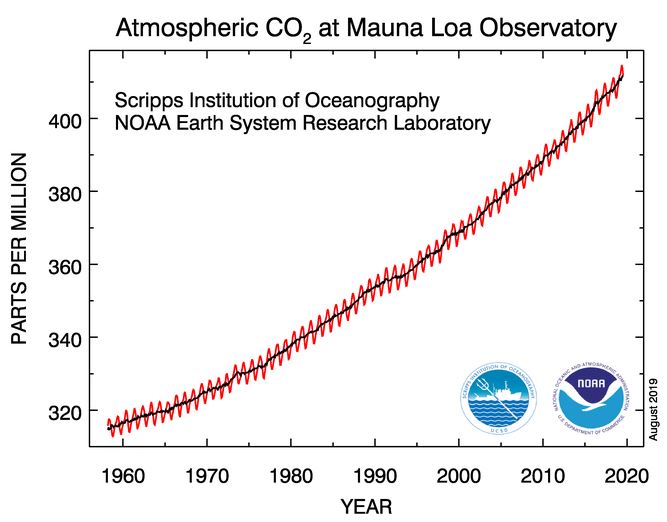 Figure 2.3: The concentration of carbon dioxide in the atmosphere has been directly measured since 1958, increasing from just above 315 parts per million (ppm) in 1958 to over 410 ppm currently. At a fundamental level, this increase is due to more carbon being emitted into the atmosphere than pulled from it.
Click Here for Text Alternative for Carbon dioxide Chart

A chart showing global carbon dioxide increase since 1958. The line gradually increases from 315 parts per million (ppm) in 1958 to over 415 ppm in August of 2019. Seasonal fluctuations occur, but only a few ppm each year. The graph shows a steadily increasing rate from 1958 to 2019.

Just as a business that loses more money than it makes runs a deficit, when humans overuse the capacity of the earth to replenish resources, it could be said that these places are running an ecological deficit. It stands to reason that if we could figure out our planetary capacity to generate natural resources (aka our "budget" or "revenue" of natural resources) and compare it to how much of that capacity we use (aka our "costs"), we could determine if we are losing or gaining ecological capacity. Luckily for us, some people have been working on this for the last decade or so and have come up with the concept of ecological footprint.

We have been the most successful species on this planet. Two hundred years ago, nobody could have imagined that kind of lives we are living today: the cities we have been able to construct, the technologies we have been able to create. And so we are asking ourselves, how will we be able to maintain the success in the future? Since the end of World War Two, we have more than doubled population, and we are consuming far more per capita. In the last century alone, we are now consuming tenfold the energy that we did hundred years ago, and we are recognizing that the planet is getting awfully small.

If we just compare, you know, how successful we have become as a species. We as a species, together with our cows and pigs, we are about 97 percent of the biomass of all vertebrate species. But only about three percent are wild species, so we have been able to dominate the whole ecosystem of the planet. Now that may be a success, but its success also had its cost: that the planet is getting awfully small. That’s why we have developed the ecological footprint to start to measure how big are we compared to the biosphere, how can we actually use our ecological assets more effectively to live well on this planet. Now the ecological footprint is a very simple tool. It's a tool like a bank statement that tells us on the one hand how many resources do we have that renew itself, thanks to the biosphere that is powered by the sun, and how many do we use, and then you can see to what extent we are actually dipping into the overall capital or to what extent we're really living within that interest that nature provides us.

If you want a real simple and effective model of how to the economy operates, just take the cow. Because everything that enters the cow as food will leave again. Very similar to an economy, a cow also produces a value-added, the milk. The milk, too, whether you consume it or not, becomes waste.

For some deeper insight into ecological footprint, read Chapter 4 of Is Sustainability Still Possible?: "Getting to One-Planet Living," by Jennie Moore and William E. Rees. (See the Modules tab of Canvas for a digital copy.)

"Ecological Footprints estimate the productive ecosystem area required, on a continuous basis, by any specified population to produce the renewable resources it consumes and to assimilate its (mostly carbon) wastes."
~Jennie Moore and William Rees, "Getting to One-Planet Living", p. 40

Dr. Wackernagel sums up the goal of ecological footprint analysis by asking a simple question: "How will we be able to maintain the success (of our society) in the future?" The ecological footprint is based on the recognition that humans depend on the earth's natural resources for survival, and that our "success" is predicated on the ability of the earth to replenish natural resources through time. In the simplest terms, the question we need to answer is: "How many resources do we have that renew itself...and how many do we use?" as Dr. Wackernegel mentions. We only have one earth, and this one earth can only regenerate so many resources in a given year (produce food, filter water, pull carbon dioxide out of the atmosphere, etc.) - this is our stock of resources. How can we use this information to determine whether or not we are overusing natural resources? In principle, it's relatively simple: If we compare the number of resources that are provided each year by the earth (one "earth") to the amount we use (our global ecological footprint), we can determine whether or not we are living within our ecological budget.

The bad news is that according to the Global Footprint Network, humans have been living beyond their ecological means for about 40 years now, as the chart below shows. The good news is, uh <checking notes>, well unfortunately in terms of global ecological footprint, there is very little good news. Just about every country across the world has an increasing ecological footprint.

The Global Footprint Network (GFN) created another way to illustrate the same phenomenon by publishing the annual "Earth Overshoot Day." Earth Overshoot Day indicates the date in a given year after which humanity starts using more than a sustainable level of natural resources. As the GFN puts it: Earth Overshoot Day is when "we began to use more from nature than our planet can renew in the whole year." So an earlier Earth Overshoot Day means that we are using up our resources faster. In 2016, this happened on August 8th. Pretty sad, right? Well, unfortunately in 2017, this occurred on August 2nd, and in 2019, it was July 29th! This is not the kind of downward trend sustainability-types like yourselves want to see.

While humans are unfortunately overusing resources on a global scale, it is not all bad news. If the natural replenishment rate of a renewable resource is known, then it is possible to harvest them at a sustainable rate. How can this be done? I want you to think about this for a minute before moving on. (Maybe take a look at Figure 2.4 for some inspiration.)

Okay, here's the oh-so-elusive secret: If you want to maintain a supply of renewable natural resources, don't harvest them any faster than they can be naturally replenished. This practice is generally referred to as the principle of sustainable yield (you might also see it referred to as "maximum sustainable yield" or "sustained yield"). This is a pretty self-descriptive term, but Encyclopaedia Britannica provides a concise definition:

Sustainable yield "can in principle be maintained indefinitely because it can be supported by the regenerative capacities of the underlying natural system."

This can in theory be done for any renewable natural resource in order to maintain a steady supply over time. This is most often thought of in forest management and fisheries management, but can be applied to any resource (e.g., soil, water, animal populations, plant populations). There are numerous examples of this in practice. For example, most of Sweden's forests are harvested using sustainable yield practices, and in fact the total amount of forest has been increasing since at least the 1950s. Some forest areas under U.S. federal jurisdiction are required to be managed using sustainable yield practices, and the Maine lobster industry has been maintained for well over 100 years because of sustainable yield practices.

Please also keep in mind that - as indicated above - the same principle applies to emissions/pollution. If pollution is emitted faster than it can be safely absorbed, it will build up in the environment and/or cause damage to the environment. Rising CO2 levels are one example of this. 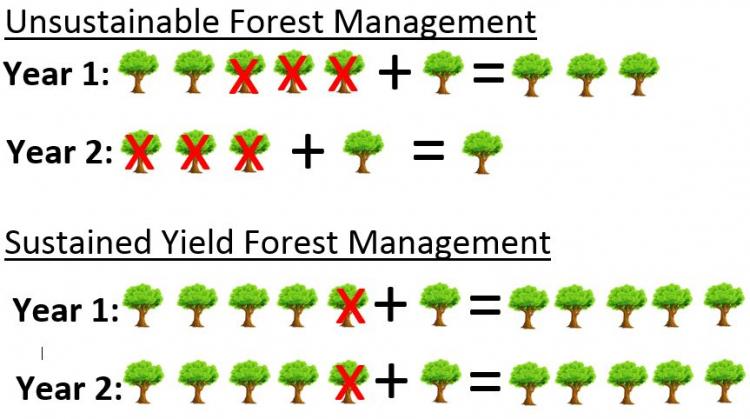 Figure 2.6: Sustained yield forestry. If the rate of regeneration is known, and resources are harvested no faster than that, the resource can be sustained over time. Click for a text description.

It is very important to note a few caveats regarding sustained/sustainable yield management:

How much longer can we continue to live beyond our ecological means? Unfortunately, there is no way to know. As Moore and Rees put it in the optional reading: "System collapse is a complicated process...We may actually pass through a tipping point unaware because nothing much happens at first" (p. 41). There is a phenomenon, most often used in biology/ecology, called overshoot and collapse that can help us understand some of the risks involved with overusing renewable resources and passing through such "tipping points."

This short article describes the well-documented example of overshoot and collapse on St. Matthew Island in Alaska. The rest of the article describes how this may be an analogy for humans, specifically with regard to energy. It is good food for thought.

Overshoot and collapse can occur when there is insufficient immediate or short-term feedback to prevent an organism from acting against its own self-interest. If widespread human suffering occurred because of ecological overuse and it could be proven that resource overuse was the cause, it is likely that we would try to do something about it.

Of course, suffering is happening now, some of which is due to resource scarcity, but apparently not enough for us to address it. Regardless, it is possible to use more than our allotted biocapacity and survive, at least for a while. What's scary is that no one knows exactly how long we can keep using resources at this rate without reaching a tipping point. It may be 10 years, maybe 20 years, maybe even 50 years (very unlikely). It depends on a lot of factors, but one of the main problems is that by the time we realize collapse is occurring, it may already be too late to do anything about it. That is the "collapse" part of "overshoot and collapse." On St. Matthew Island, by the time the deer started running out of lichen to eat, it was too late. Humans are of course much more resourceful than reindeer (one would hope so, anyway), but there are likely tipping points that are points of no return. Chief among these are climate change and biodiversity loss, which will both be addressed in future lessons.

If the people in a country have a bigger ecological footprint than the physical size of the country, how can they continue to survive? For example, according to Global Footprint Network data (from overshootday.org):

How is this possible? In other words, how can a country or the whole world use more resources than can sustainably be provided, and still survive?