We'll start with the most straightforward aspect: how much do we have, and how long will it last? That is an obvious question to ask, because if we are going to run out anytime soon, it is clearly not sustainable.

Most energy sources have an "industry organization" or "industry association" associated with it. These organizations are funded by companies in the industry (e.g., the World Coal Association is funded mostly by coal producers, energy companies that rely on coal, and others) and promote policies that will increase the use of the energy source. They often fund and perform research, devise ad campaigns, lobby various levels of government, write press releases, and more. You should not view them as impartial - they exist solely to promote the energy source. However, they are generally a reliable source of data, e.g., how much coal was used in a year, the portion of GDP from coal, etc. They are also good sources of information regarding industry technology and trends.

But please keep this in mind when looking for energy data: if at all possible, you should use information (including data) from the EIA (Energy Information Administration), IEA (International Energy Agency), World Energy Council (WEC), or some other reliable, impartial source. Note that these industry organizations will usually use data from one of these impartial sources, but it's always best to go to the original source.

First and foremost, note all of the various caveats issued in these reports. As the EIA notes: "The amount of much coal that exists in the United States is difficult to estimate because it is buried underground." (Probably not what you want to hear from the authority on the topic, but bear with me.) The same goes for the rest of the world, and it is more difficult in a lot of other countries because even less is known about the underground resources. Also, there is a difference in the basic assumptions regarding the statistics.

Terminology is important to keep in mind.

All of these quantities use some estimation, with the bigger reserves requiring more estimation, so take all of them with at least a grain of salt. They should be considered a good estimate, with the estimated recoverable reserves probably being a reasonably good (but possibly conservative) estimate of what's left and can be realistically mined. You don't need to memorize all of these terms, by the way! It wouldn't hurt, mind you, but the goal here is for you to understand that coal resources are known to varying degrees, and for you to be conscious of which estimates companies/organizations/people cite.

Figure 4.2: Levels of estimated coal reserves in the U.S. as of 2020 (this is the most recent figure available as of 2021). (Click on image to view more information and download Excel file of Figure data.)
Click for a text description of Figure 4.2.

US Coal resources and reserves

Tons of Tons and Tonnes

There are many benefits to living in the United States, but having easy to understand energy units is not one of them. We use a mixture of Imperial and English units, with the system usually referred to as U.S. Customary units. Most of the rest of the world uses metric units, which are also considered SI units (Systéme international d'unités). Got all that? Good. (Here is an explanation of how convoluted the non-metric units are, if you are so inclined.)

Coal in the U.S. is usually measured in tons, which is a unit I'm sure you have heard of, and likely used, before. A U.S. ton is equivalent to 2,000 pounds. However, to prevent confusion with an Imperial ton, the U.S. ton should be referred to as a short ton. A long ton, on the other hand, weighs 2,240 pounds. Finally, the metric ton, which is also known as the tonne, is equivalent to 1,000 kg, or about 2204.6 lbs. To summarize:

"Very impressive" you might be thinking, but what does it all mean for sustainability of supply? Glad you asked! The EIA states that: "Based on U.S. coal production in 2019, of about 0.706 billion short tons, the recoverable coal reserves would last about 357 years, and recoverable reserves at producing mines would last about 20 years" (FYI, last year they said we had about 332 years, but this year's increase is because we are mining less coal than last year, as you will see below). How do they get this number (357 years)? Hint: it is based on the current production and the Estimated Recoverable Reserves (ERR).

So the years of supplies remaining went from 261 years to 348 years to 325 years to 332 years to 357 years, all in the span of four years. The moral of this short little story: All predictions of remaining resources on a large scale should be considered scientific estimates. They provide a sense of remaining supplies, but that can change quickly as supply and/or demand change.

Note that this assumes that coal production rates will remain the same and that technology will not change. And this, of course, assumes that this it is reasonable to mine all remaining U.S. resources, given environmental and social impacts, but it is a good starting point for the U.S. The same set of assumptions (with different numbers) are used to estimate how long the world will have coal - the recoverable reserves and current levels of coal production. According to the World Coal Association, there are between 110 years and 121 years of reserves available worldwide.

Coal has been used en masse as an energy source since near the beginning of the Industrial Revolution in the late 1700s. The infrastructure for coal mining, transportation, and use (mostly in power plants) is well-established and if it were not for the environmental and social impacts, coal would be a good source of energy. It is energy-dense, and we know how to use it. (I think there's a ZZ Top song about that.) It turns out that it is also pretty cheap to use (ignoring externalities, of course!).

Figure 4.3: Average Cost of Fossil Fuels at U.S. Power Plants in $/million Btu’s, 2004 – 2019
As you can see from the chart, coal is the cheapest fossil fuel for generating electricity on a dollar per million Btu basis. This, of course, does not include external costs.
Click for a text description of Figure 4.3.
Credit: Data downloaded June 2021 from U.S. EIA. Click to view the raw data.

Despite the relatively low cost of fuel, coal is rapidly being replaced by natural gas and to a lesser extent, renewable energy. This is partially due to the lower emissions of natural gas, but mostly due to basic economics. Energy generators want to make a profit like everyone else, and right now, natural gas and some renewables are simply more profitable, particularly in the U.S. In addition, investors and banks are less likely to invest in coal and insurance companies are increasingly likly to refuse to insure new power plants due to the risks involved with climate change and future regulation. See the suggested reading below for some insight into some of these issues on domestic and international scales.

Coal use has been on the decline in the U.S. for the past 15 - 20 years..Feel free to read the following article for some insight into what is causing this, but also some of the issues with coal on an international scale.

It is no exaggeration to say that coal has played a starring role in delivering the energy that was used for the development of the U.S. and many other countries (especially Western countries) in the past 200+ years. It also currently provides over 40% of global electricity (according to the World Coal Association), and is the primary source of electricity for many "developing" countries like China and India  Coal is relatively cheap (again, as long as you don't include external costs), abundant, and relatively easy to use. There is a reason we've been using it at such a high rate for so long! So far, so good. So what's the catch?

Now the bad news: coal has a lot of negative environmental and social impacts. 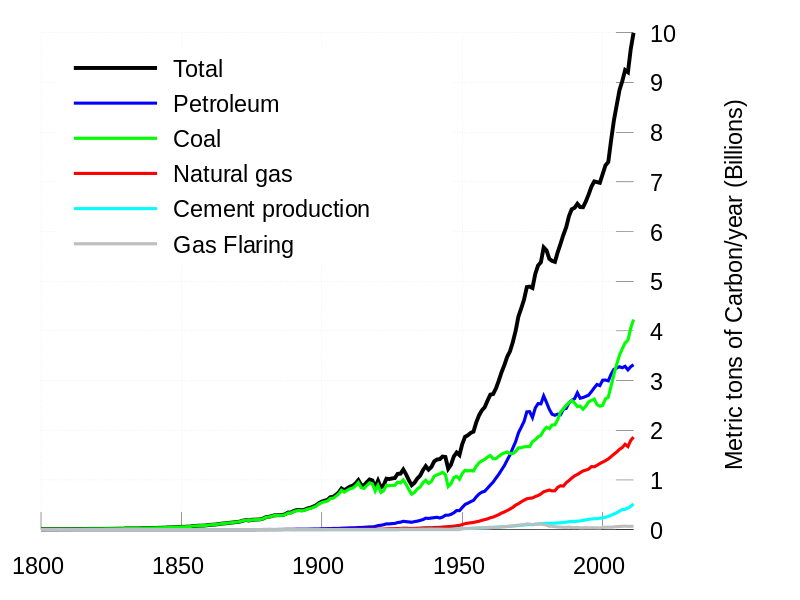 Figure 4.4: This chart, which was created using Carbon Dioxide Information Analysis Center (part of Oak Ridge National Lab) data, shows the global anthropogenic emissions of carbon. As you can see, coal is the largest single source of carbon globally, overtaking oil in the early 2000s.
Credit: Borvan53, CC BY-SA 3.0
Figure 4.5: This interactive chart provides an alternative way to view sources of global carbon dioxide emissions. It was created by Our World in Data using Carbon Dioxide Information Analysis Center data as well.
Credit: Our World in Data, CC BY 4.0 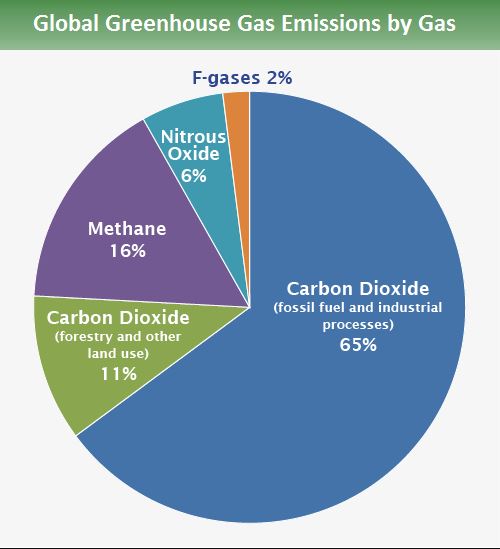 Figure 4.6: This chart shows the global anthropogenic greenhouse gas emissions by percent. Some simple math shows you that about 76% of the impact on the climate that humans have is from CO2. This is a major reason why CO2 emissions are such a major focus.
Credit: U.S EPA, original source IPCC

One possible solution to this is carbon capture and sequestration (CCS), which is a process that can capture CO2 and bury it (i.e., sequester it) in underground rock formations. Under ideal circumstances, up to 90% of the carbon dioxide will turn into solid rock and thus not pose a leakage threat, though these "ideal" circumstances have proven to be elusive. (This is usually what is referred to as "clean coal" technology, though it is notable that only the carbon emissions are reduced in "clean coal" plants. Mining waste and particulates and other emissions still make this a relatively "dirty" source of energy, which causes "clean coal" to have higher mortaility rates than other sources.) While promising, there is some indication that CCS might not be as effective as once hoped. It is only beginning to be demonstrated on a commercial scale, and some plants have had major issues, so the jury's still out.

One interesting irony is that carbon dioxide can be injected into oil wells to increase output, and has been since 1972. In addition to this, as pointed out in the EIA article above, about 11% of the methane emissions in the U.S. are due to venting of methane gas from underground coal mines. Recall that methane is about 30 times as powerful as carbon dioxide with regards to climate change.

While relatively inexpensive in simple terms (not including externalities), the external costs are likely quite high due in particular to negative health impacts (as you read in Lesson 1). But as you saw from the EIA, there other environmental concerns, such as mercury pollution, acid rain (which has mostly been mitigated through technology/policy), and remnants of power generation like fly ash. Coal mining can be a risky business, as you probably remember from the Upper Big Branch Mine disaster that killed 29 miners in West Virginia in 2010. There have been many other accidents in the U.S. as well, as indicated above. China is the world leader in coal mining fatalities, according to the Wall Street Journal, including over 1,000 killed in 2013 and 2012, with more than 33,000 deaths in the past decade. There is also environmental damage that often results from mining and mining waste. Coal is a major source of particulate pollution, and contributes to the 1.1 million deaths in China from air pollution in 2016 and 1.2 million deaths in India in 2017

In short, coal is a reliable energy source, and is generally a relatively cheap source of energy as long as externalities are not included. If externalities were to be included, the price would undoubtedly increase, especially if the social cost of carbon and negative health impacts were included. CCS provides some hope for reducing the carbon dioxide emissions of coal use, but other significant sustainability problems will persist even with carbon capture.