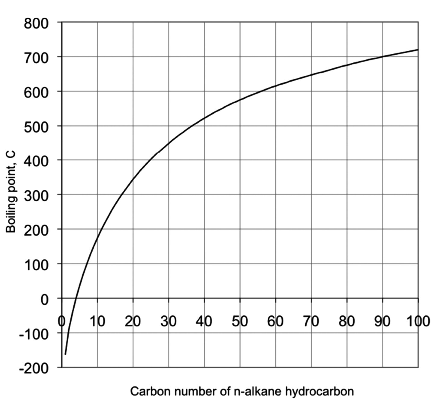 Complex mixtures such as crude oil, or petroleum products with thousands of different compounds, boil over a temperature range as opposed to having a single point for a pure compound. The boiling range covers a temperature interval from the initial boiling point (IBP), defined as the temperature at which the first drop of distillation product is obtained, to a final boiling point, or endpoint (EP) when the highest-boiling compounds evaporate. The boiling range for crude oil may exceed 1000 °F.

The ASTM D86 and D1160 standards describe a simple distillation method for measuring the boiling point distribution of crude oil and petroleum products. Using ASTM, D86 boiling points are measured at 10, 30, 50, 70, and 90 vol% distilled. The points are also frequently reported at 0%, 5%, and 95% distilled. ASTM D1160 is carried out at reduced pressure to distill the high-boiling components of crude oil. As an alternative method, distillation data can be obtained by gas chromatography (GC), in which boiling points are reported versus the weight percent of the sample vaporized. This test method described in ASTM D2887 is called simulated distillation (SimDis).