Visbreaking is a mild thermal cracking process applied to reduce the viscosity of VDR to produce fuel oil and some light products to increase the distillate yield in a refinery [1]. Depending on the feedstock properties and thermal severity in the reactor, the process will typically achieve 10–25% of conversion of the heavy ends to gas, gasoline, and distillates while producing fuel oil with the desired specifications. Carbon rejection in small quantities on the reactor surfaces during thermal cracking helps reduce the viscosity of the fuel oil product (Figure 6.3). The process decreases the demand for a cutter stock used as diluent (e.g., kerosene) that might otherwise be used to reduce the viscosity of the heavy ends to meet the fuel oil specifications. Adding a diluent may still be needed depending on the sulfur content of the product and the fuel oil specifications. Although the principal objective of visbreaking is to reduce viscosity, some refineries may use this mild cracking process to convert fuel oil into lighter distillates. 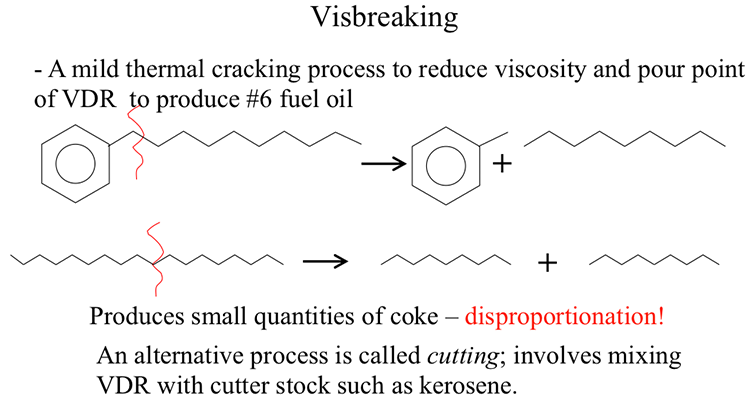 As in all chemical reactions, conversion in visbreaking depends primarily on temperature and time. As a measure of “thermal severity” under reactions conditions, one can use a thermal severity index (TSI) as a function of temperature and time that is shown in Figure 6.4. The exponential dependence of TSI on temperature relates to the general exponential term that constitutes the chemical reaction rate constants. The chemical conversion in visbreaking reactions can be expressed as the reduction in concentration (cA) of long-chain alkane (or high-molecular weight compounds) in the feedstocks. One can see from Figure 6.4 that the conversion in the visbreaking reaction can be expressed by the integral in Figure 6.4, assuming an apparent first-order kinetics for the reaction. It can also be seen, in Figure 6.4, that the conversion that can be related to the extent of visbreaking depends on (kt); and the TSI to establish the interchangeability of T and t for a given conversion relates to (e(-Ea/RT)t), where Ea is the apparent activation energy of the reaction, R is the universal gas constant, T is the temperature, and t is time. In using the TSI for comparing thermal severity of different T and t combinations as major operating variables of visbreaking, care should be taken to use the right units for R and T. As a general convention, an apparent activation of energy of 50 kcal/mol is assumed for thermal cracking reactions involving the homolysis of C-C bonds to produce free radicals.

Higher visbreaking severity would produce a higher reduction in viscosity. Thermal severity is limited by the reactivity of the feedstock and the storage stability of the residual fuel in accordance with the desired conversion level and desired reduction in viscosity. Asphaltene content and concarbon of the feedstocks are important factors to consider when selecting an appropriate thermal severity for the process to prevent excessive coking in the visbreaking reactor. 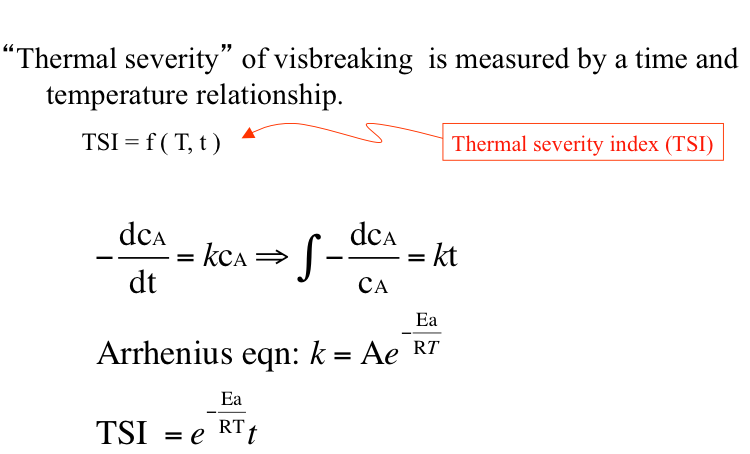 Figure 6.4. A definition of thermal severity index as a function of temperature (T) and time (t) in a visbreaker.
Click here for a text alternative to the figure above