The Indian Vulture Crisis: An Example of Complex Systems Behavior

The "Indian Vulture Crisis" may or not be a familiar term to you, but it is important enough to the history of modern India that it has involved dozens of research experts as well as major changes in wildlife, human health, and government policies, and now has its own Wikipedia page (Indian vulture crisis) that you can browse. It is also an interesting example of complex systems behavior that involves food systems and unintended consequences of veterinary care for animals. The main causal links are outlined below in figure 1.2.2, and the narrative of the crisis goes as follows:

Beef cattle are hugely important to Indian food systems even though they are usually not consumed by adherents of the majority Hindu religion (however, Indian Christians and Muslims, for example, do consume beef). Cattle are also widely used as dairy animals (think: yogurt and clarified butter as important parts of Indian cuisine) and are even more important as traction animals (oxen) to till soil for all-important food crops by small-scale farmers across India. Because of their importance and to treat inflammation and fevers in cattle, in the 1990s the drug diclofenac was put into widespread use across India. However, timed with the release of this medication, a precipitous drop in the population of Indian vultures began, which became the fastest collapse of a bird population ever recorded. Vultures are not valued in many parts of the world, but scavenging by vultures was the main way that dead animal carcasses were cleared from Indian communities, especially in the case of beef cattle where the meat is not consumed. It was not until the 2000s that the cause of vulture population collapse was discovered to be the diclofenac medicine administered to cattle, which is extremely toxic to vultures eating dead carcasses. However, the consequences of this population collapse did not end with the solving of the mystery of the vulture population collapse, which was already a tragic and unforeseen consequence. Rather, the fact that vultures are a key part of a complex system resulted in further unforeseen consequences in both human and natural parts of the Indian food system. A few of these are shown in figure 1.2.2 below: first, since vultures are in fact an ideal scavenger that creates a "dead end" for human pathogens in rotting carcasses, and since they were no longer present, water supplies suffered greater contamination from carcasses that took months instead of weeks to rot, leading to greater human illness. Second, populations of rats and dogs, which are less effective carcass scavengers, expanded in response to these carcasses and the lack of competition from vultures, which resulted in dramatic increases in rabies (and other diseases) due to larger dog and rat populations and human contact with wild dogs. This is significant since more than half of the world's human rabies deaths occur in India. Finally, the vulture crisis even had implications for religious rituals in India: people of the Parsi faith, who practice an open-air "sky burial" of their dead where the body is consumed by vultures, were forced to abandon the practice because of hygiene concerns when human bodies took months instead of weeks to decompose. A final consequence of these problems was that the drug diclofenac was banned from use in India, Nepal, and Pakistan in hopes of helping vulture populations to revive. This final turn of events is an example of the human system responding to the unforeseen consequences. Additionally, alternatives to these drugs have been developed for veterinary use that have no toxicity to vultures. 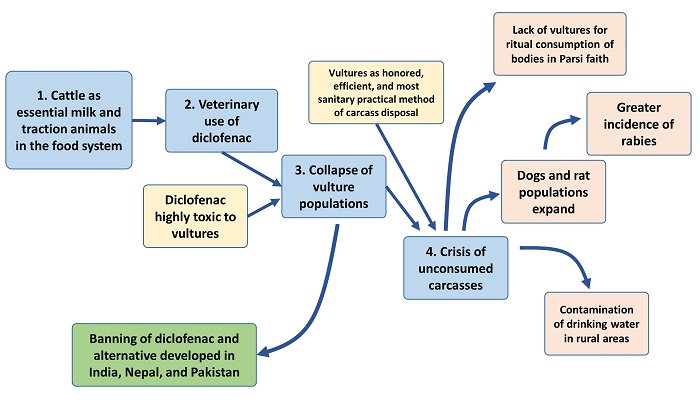 Note the properties of complex systems and human-natural systems exhibited by this example. Farmers sought mainly to protect their cattle from inflammation and speed healing in service of the food system, while pharmaceutical companies sought to profit from a widespread market for an effective medication. The additional, cascading effects of the human invention diclofenac, however, were dramatic, far-ranging, and in some cases unexpected, because of the many interacting parts in the food systems and ecosystems of Indian rural areas: cattle, groundwater, wild dogs, and human pathogens like rabies. The crisis eventually provoked responses from the human system, with impacts on human burial practices among the Parsi, laws banning diclofenac, and development of alternative medications. The search for sustainability in food systems, like those you will think about for your capstone regions, involves designing and choosing adequate human responses to complex system behavior.

One final note on this example is to point out that to fully understand the Indian vulture crisis a large number of different disciplines were brought to bear: we need cultural knowledge about the beliefs and practical usefulness of both cattle and vultures in India. We also need biological knowledge about drug toxicity to wildlife, pathogens, groundwater contamination by microbes, and rat and dog populations. We also need policy expertise to think about transitioning food systems to less toxic alternatives to current practices. And all of these disciplines needed to be brought together in an integrated whole to assemble the diagram shown in figure 1.2.2. The purpose of this text and this course on food systems is to help you to develop some of the skills needed for this sort of interdisciplinary analysis of human-environment or human-natural systems.

‹ The Systems Concept up Food Systems as Human-Natural Systems ›