Where do plants get their water?

Regions that receive enough precipitation to grow crops without irrigation (i.e., those areas shaded green on the map below) would be considered high resource areas with respect to water. A high-resource region is more likely to be a more resilient food production region. In contrast, a low resource region with respect to water would be regions on the map below in the orange-shaded colors. In these regions, extra effort is needed to provide enough water for crops, such as through the development of an irrigation system.

Compare the crop water use values in Figure 4.1.6 with the average annual precipitation in Figure 4.1.5 and you'll see that there are parts of the US where there isn't enough precipitation to grow many crops. In fact, there is a rough line running down the center of the US at about the 100th meridian that separates regions that get more than about 20 inches of rain per year from regions that get less than 20 inches of rain per year. On the map in Figure 4.1.5, this line is evident between the orange-colored areas and the green-colored areas. Generally, west of the 100th meridian there is insufficient precipitation to grow many crops. If a crop's consumptive water use or ET is greater than the amount of precipitation, then irrigation of the crop is necessary to achieve high yields. 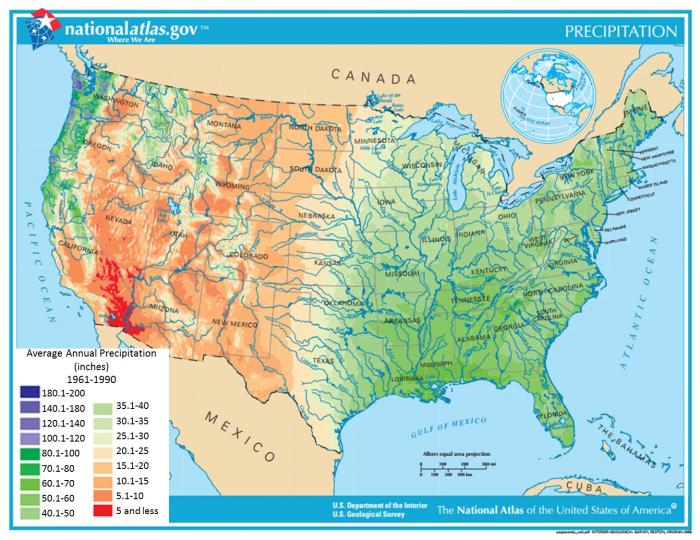 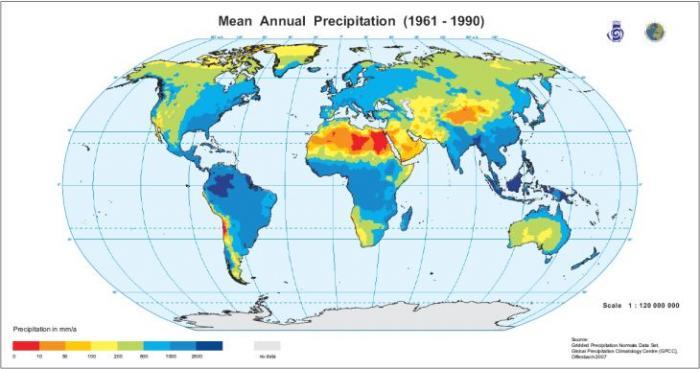 Figure 4.1.5. a) Average annual precipitation in the United States 1961-1990 and b) Mean annual Global Precipitation (1961-1990)
Credit a) USGS: The National Map and b)Terrascope: Rainwater Harvesting 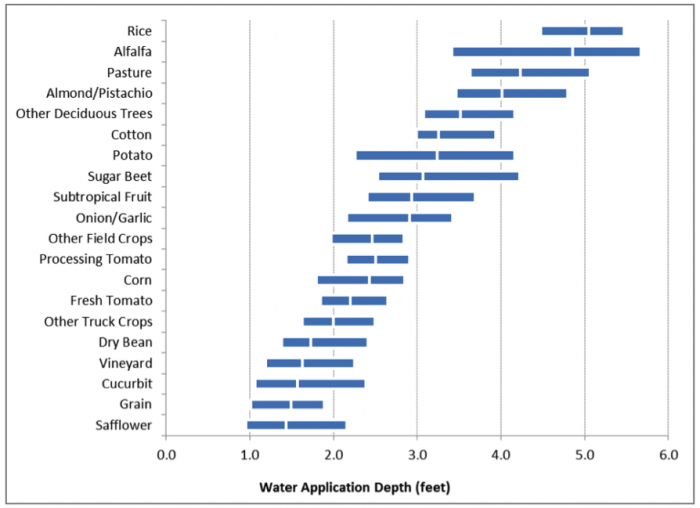 How can we grow crops when there is insufficient precipitation?

In regions where precipitation is insufficient to grow crops, farmers turn to other sources of water to irrigate their crops. Irrigation is the artificial application of water to the soil to assist in the growth of agricultural crops and other vegetation in dry areas and during periods of inadequate rainfall. These sources of water can be from either surface or groundwater. Surface water sources include rivers and lakes, and diversion of water from surface water sources often requires dams and networks of irrigation canals, ditches, and pipelines. These diversions structures and the resulting depletion in river flow can have significant impacts on our river systems, which will be covered in the next part of this module. The pumping of water for irrigation from aquifers also has impacts, which are also discussed in the next part of this module.

Water use for irrigation comprised about 80-90 percent of U.S. consumptive water use in 2005, with about three-quarters of the irrigated acreage being in the western-most contiguous states (from USDA Economic Research Service). For example, in the state of Colorado, irrigation comprised 89% of total water withdrawals in 2010 (Figure 4.1.7). Irrigated agriculture is also very important economically, accounting for 55 percent of the total value of crop sales in the US in 2007 (from USDA Economic Research Service). Globally only about 18 percent of cropland is irrigated, but that land produces 40 percent of the world's food and about 50 percent by value (Jones 2010). 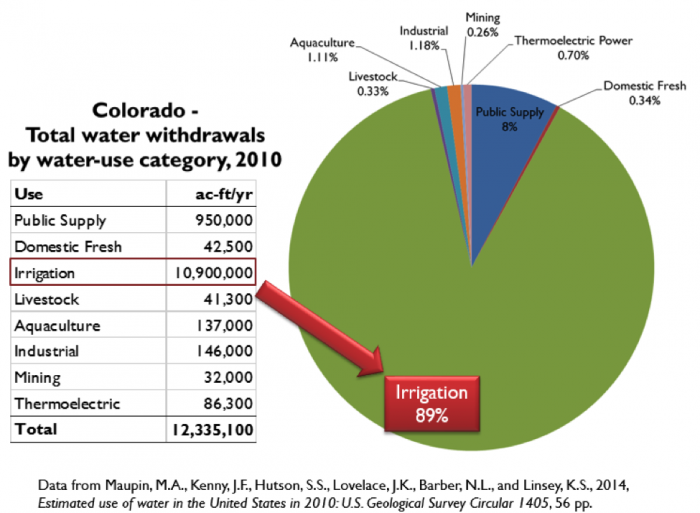 In this activity, you will employ geoscience ways of thinking and skills (spatial thinking and interpretation of the spatial data to characterize specific regions for the geographic facility). 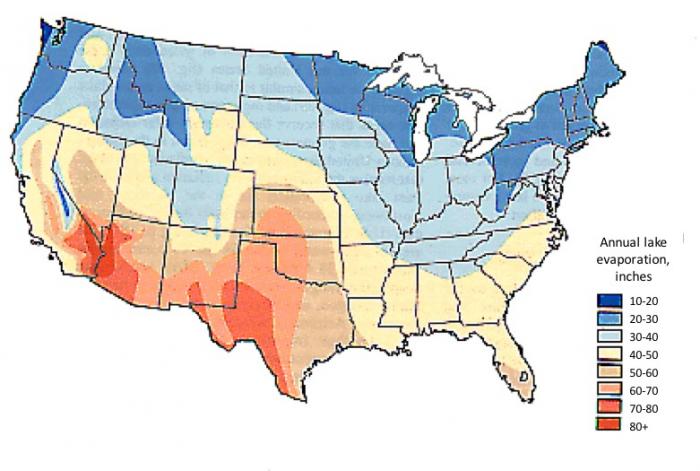