The Colorado River in the southwestern U.S. is an excellent case study of a river that is highly utilized for irrigation and agriculture. A majority of the Colorado River’s drainage basin has an arid or semi-arid climate and receives less than 20 inches of rain per year (Figure 4.2.5), and yet the Colorado River provides water for nearly 40 million people (including the cities of Los Angeles, San Diego, Phoenix, Las Vegas, and Denver) and irrigates 2.2 million hectares (5.5 million acres) of farmland, producing 15 percent of U.S. crops and 13 percent of livestock (USBR 2012). Much of the irrigated land is not within the boundaries of the drainage basin, so the water is exported from the basin via canals and tunnels and does not return to the Colorado River (Figure 4.2.6). 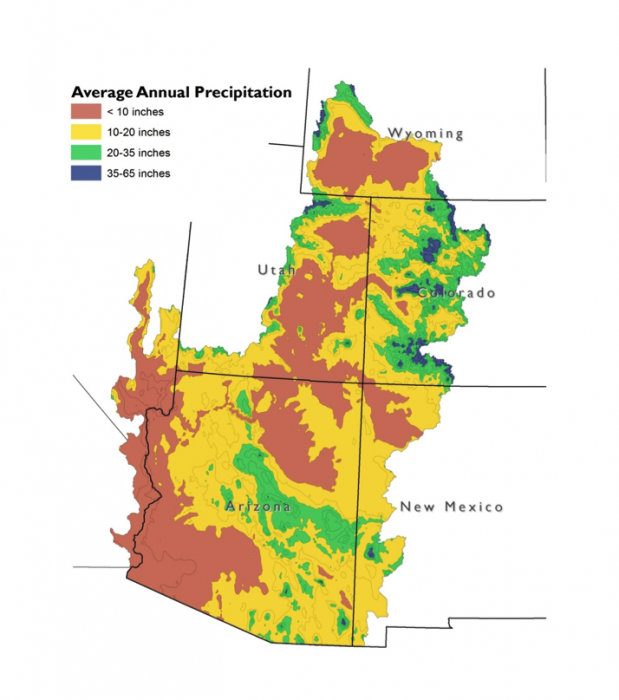 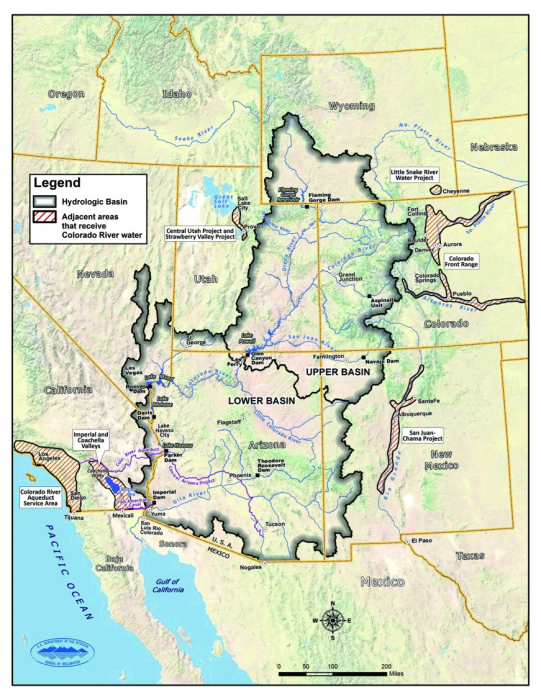 Watch the following video then answer the questions below

Video: Resilient: Soil, water and the new stewards of the American West (10:13)

Narrator: A drop of water from a sprinkler on a quiet Los Angeles street. A shower head in a Las Vegas hotel. Agricultural land in California's Imperial Valley. Where does all this water come from? The Colorado River. In 1922, representatives from seven states gathered at Bishop’s Lodge New Mexico to sign the Colorado River Compact, an agreement on how to allocate water in this precious river system. But that River had more water then, than it does today. The Colorado River Basin touches the lives of every American. The river system runs through seven states in the US, and two in Mexico, and supplies water for over 36 million people. It also irrigates over five million acres of cropland and provides eighty percent of our winter produce, all from one river. And agriculture is the first to feel the pressure. At the headwaters of the Colorado River, farmers and ranchers are creating a toolbox of resilience. They save water with efficient technology and by building healthy soil.

Brendon Rockey, Rockey Farms, Center, Colorado: My grandpa always had a philosophy on this farm that you have to take care of the soil before the soil can take care of you, and he just felt like we had gotten away from that. That's the number one thing with everybody. is yield, yield, yield. Everybody wants just big production, you know, so that's why you want to dump on the fertilizer, kill off anything that poses a threat. It's all about production. We put more of an emphasis on quality. And what's really nice is when you put the emphasis on quality, the quantity usually comes along with it.

Narrator: And he also uses less water. How? By managing his soil more efficiently and working with nature instead of against it. Brendon rotates his potato crops with green manure, or cover crops, that enhance soil health while reducing his dependence on pesticides, fertilizers, and water.

Narrator: Unhealthy soil lacks life. Often a crust forms on its surface. When a crop is watered, very little soaks into the soil. Instead, it sits on top and is left to evaporate or run off. This land often has to be watered more frequently to get water to the crops. Healthy soils teem with life and are often built when farmers plant a mix of cover crops that add nutrients to the soil. When these plants die they become organic matter which helps store water in the soil. That means farmers can irrigate less, and have more certainty in times of drought.

Brendon Rockey: The reason we got into cover cropping was a response to a drought. Now that we've brought in more diverse crops, that have diverse root systems, which actually help benefit the water use efficiency as well, we've regenerated the soil to the point now where I'm growing a potato crop on about 12 to 14 inches of irrigation water per year. We're focusing on the soil, we're investing in the soil and we're bringing up for the functionality of the soil back to its optimum range.

Mike Jensen, Homegrown Biodynamic Farm, Bayfield, Colorado: A farm after 20 years should have much better soil than when it started. The best thing I do for my land is cover cropping. It rejuvenates the soil keeps everything happy, gets all the flora and fauna in balance. It's not about production this year, it's about production for the next 30 years.

Mike Nolan, Mountain Roots Produce, Mancos, Colorado: One thing I've learned from a bunch of folks, old-timers I've worked with is, do your best to not ever have any bare ground, nothing open, no open soil. I mean even in nature, even in the desert, technically there are things covering the ground. There's things, fungi and bacteria, that are holding the ground together. So what I did about three weeks ago is I planted out this oats crop. I’m not gonna harvest this for the seed or anything, but what it's going to do, it's going to hold moisture in here.

Cynthia Houseweart, Princess Beef Company, Hotchkiss, Colorado: Right now we're in full bloom, but what I like to see is a variety of plants. I don't want to just see straight alfalfa, I want to see grass and, and clover. I don't want bare ground. If we didn't have irrigation water, we would be a desert. This would be sagebrush, cedar trees. This, the water is what creates our livelihood. We graze during the growing season. So the conventional thing is, you move your cows off your pastures, grow them and cut them for hay. What we do instead of cutting them for hay, we graze them.

Narrator: Cynthia waters, using a center pivot. As it moves across her fields, the cattle follow behind eating fresh grass.

Cynthia: And the things they trample in, and their manure, adds to the soil, feeds the soil. It breaks down, turns into humus. The soil becomes more like a sponge and can suck up water that we put on it and rain, so the soil improves, which means the plants grow better and then our cows look better.

Dan James, James Ranch, Durango, Colorado: When you build topsoil, you increase the capillary action of the soils ability to retain water; and the less frequent you're applying your water, the more those roots have to go after that water, as it recedes into the ground. And so now you have all these roots below the surface, and all of a sudden here comes your cow. She comes in and she clips that off. Now your plant’s this high and the plant sheds the same proportion of roots. Now you're adding organic material and you're growing topsoil.

Strengthening the soil is also a concern of Steve Ela, a fruit grower in Hotchkiss Colorado. With precise tools like micro sprinklers and permanent drip irrigation, Steve can use water precisely when and where he needs it most, and his soil is healthy enough to efficiently deliver that water to his crops.

Steve Ela, Ela Family Farms, Hotchkiss, Colorado: For us on the farm it's the difference between using first furrows and the micro specters and now drip. It’s been a bit of an evolution of thinking. So for me it's been, it's not that really one system is better or worse, but it's an evolution of thinking, of trying to manage our water better, trying to use the system of irrigation management and cover cropping to manage our weeds, and also to just only to grow better fruit and healthier trees. Yes, it's expensive on the upfront cost, but it's a system then we can use for 20 years. It's very efficient. I think it probably saves us that much, you know, in water.

Narrator: It's innovation that saves water and money, while increasing soil fertility. It's also innovation that includes technology. Water data delivered by weather satellites, GPS, and even smart sensors like those used by Randy Meaker, a Colorado wheat and corn grower. He uses cover crops to improve his soil and by monitoring soil moisture, he can more effectively use the center pivots to reduce water use.

Randy Meaker: There are huge efforts going on right now, trying to figure out how we and the western United States can solve the shortages of water due to drought conditions. There's two ways to keep water in a bucket and one is to put more water in at the top, the other one is to take less water out at the spigot. People in the lower Basin States, where the population centers are, they're looking for us to supply them more water. But what we're looking for is a responsible use from them. What good is it for me to be restricted if I realize that we're still irrigating lawns, we're still washing cars.

Narrator: Water is the lifeblood of our Western landscape. Farmers and ranchers are as essential to it as the water itself. The water challenges these farmers face are many, but across the country they gather to share their water knowledge and provide each other with valuable support. They build community and grow good food, while stewarding both their land and their water. They are the water stewards of the Colorado River Basin.