Bt is an abbreviation for Bacillus thuringiensis a bacteria that produces an enzyme that is toxic to the digestive system of insects in the Beetle; and Moth and Butterfly families. These two insect families include some major crop pests. Scientists have transferred the genes that code for the production of the toxins into crop plants. Because the Bt trait confers insect pest resistance, the adoption of Bt corn and Bt cotton has contributed to a significant reduction of insecticide use in these crops (See Figures 8.2.16- 8.2.18 below). 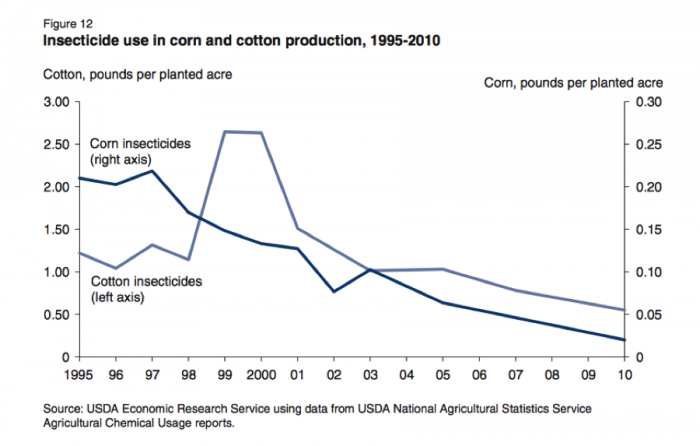 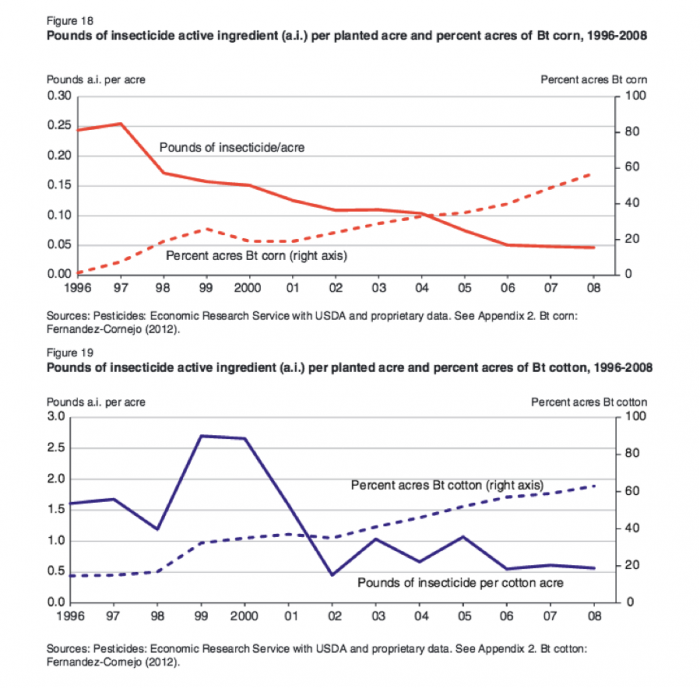 Read this summary of the use and impact of Bt corn, in the following online article “Use and Impact of Bt Maize” by: Richard L. Hellmich (USDA–ARS, Corn Insects and Crop Genetics Research Unit, and Dept of Entomology, Iowa State Univ, IA) & Kristina Allyse Hellmich (Dept. of Biology, Grinnell College, IA). 2012 Nature Education.

Many Bt corn hybrids marketed today contain Bt Cry proteins that are toxic to the corn rootworm and are “stacked” or “pyramids”. To what does this stacked or pyramid in Bt hybrids refer?

ANSWER: Stacking or pyramids refer to plants that have multiple transgenic pest resistance traits, sometimes more than one protein targets one pest species, and in some cases, a plant produces toxins for more than one pest species, as well as herbicide resistance. For example, stacked Bt corn hybrids have Cry proteins that are toxic to corn rootworms and European corn borer.

To prevent the evolution of pest resistance to Bt, what practices are most recommended?

ANSWER: To prevent pest resistance, a high dose of Bt toxin to eliminate susceptible individuals and recessive traits is recommended, as well as planting 5-20% of the field to of refuge corn (corn that does not express Bt) to sustain Bt-susceptible individuals that can reproduce with resistant individuals in the pest population. With stacked varieties of corn for instance, in the US, a farmer must plant a 20% refuge for both Bt traits together or 20% for each non-Bt trait separately.

Prior to the development of Bt crops, spores of the bacteria Bacillus thuringiensis were sometimes used as biological control for insect pests in forestry and agriculture, often on organic farms. Initially, commercial Bt crops were released in the US without any regulations to prevent resistance. But science had shown that pest populations could quickly evolve resistance to Bt, and planting Bt crops on a large scale across the agricultural landscape would create a strong selective force for pests to evolve resistance to Bt. Therefore, in response to public concern about the high risk of pests evolving resistance to Bt, the EPA convened a committee that developed a resistance management plan for Bt crops.

In addition to the crop expressing a high dose of the Bt toxin, to prevent or delay pest resistance to Bt farmers who plant transgenic Bt corn and cotton, are required to plant a refuge, a percentage of the crop field or a field close by that does not express the Bt trait. The refuge area conserves a population of insects that are susceptible to Bt, so that the susceptible insects can reproduce with insects that might have resistance to Bt, sustaining some Bt-susceptible individuals in the population. Depending on the presence of Bt crops in a region, the EPA regulation requires that farmers plant between 5% and 20% of their crop field without the Bt trait. For stacked Bt corn hybrids (with 2 or more Bt traits) farmers must plant the required refuge for each Bt trait that their crop expresses. For more information on refuge requirements, read Insect Resistance Management and Refuge Requirements for Bt Corn, from the University of Wisconsin.

Despite the refuge requirement in the US, western corn rootworm resistance to Bt corn was reported in multiple Midwestern states (Jakka et al., 2016). The first reported Bt-resistant corn rootworm populations were found in cornfields in Iowa that had been planted to Bt corn consecutively for at least three years, and the authors suggested that the fields likely did not include refuge corn (Gassman et al., 2011). Additional studies also found that the Bt toxin dose was not sufficiently high to delay the evolution of insect resistance and that corn rootworm could evolve resistance to additional Bt toxins in three to seven generations (Gassman, 2016). Further, in 2013 pest resistance to Bt crops was reported in 5 of 13 major pest species in a survey of 77 studies from eight countries across five continents, where resistance management requirements and enforcement varied. Practices that delayed resistance to Bt included the Bt crop expressing a high dose of the Bt toxin and an abundance of refuge crop planting (Tabashnik, et al., 2013).  In accordance with integrated pest management principles, entomologists also recommend that other control tactics be utilized to control pests targeted by Bt crops.