What is energy geography?

While energy geography has existed as a sub-field within geography for at least the past three decades, the interest in energy issues has been cyclical, spiking around the time of energy crisis (Solomon & Calvert, 2017). However, with energy taking center stage in regional, national, and international policy and public debates, scholarship in energy geography has seen a resurgence since the mid-2000s (Huber, 2015). Geographers argue that the inter-disciplinary nature of geographical research makes the discipline well-placed to engage with critical question of energy as well as affecting policy.

Calvert (2016) suggests that the approach of geography to energy studies is best thought of as “an academic borderland”, as it lies somewhere in the overlap between the (four) sub-disciplines of geography.

(a) a physical entity that is derived from natural processes and transformed through physical systems, and therefore partly the domain of the ‘physical geographer’;

(b) a social relation to the extent that physical entities are socially constructed as energy resources through political-economic and cultural processes but also a primary agent in the spatialization of social activities, and therefore partly the domain of the ‘human geographer’;

(c) a primary mediator of our relationship with the environment and therefore partly the domain of the ‘nature-society’ or ‘human-environment’ geographer; and

What do energy geographers study?

Energy geographers have studied the entire value chain of energy, from fuels and the extraction of energy to its distribution and consumption. A large part of the geographical work on energy has been to highlight the unequal distribution of benefits and costs that emerge from energy systems. Pasqualetti (2011), in his review of books in energy geography, notes the shifts that have occurred in the subjects studied by energy geographers since the 1950s. While in its formative years, energy geography concentrated on the location of resources, regional energy systems and nuclear power; since the 2000s, the focus has moved to climate change, energy justice, energy security, and renewable energy. While oil has been the most studied resource, recent scholarship in energy geography has turned its attention towards renewable sources of energy (solar, wind) as well as non-conventional sources (shale gas, oil sands).

Palm Oil as a Biofuel and Deforestation in Indonesia

“Dedicated to the 25 orangutans we lose every day” “Let’s stop palm oil destroying the forest”.

These are the lines with which the Greenpeace video on palm oil deforestation ends. This video, released by the organization on the internet in August 2018, recently made headlines when it was banned from being telecast to UK television screens when it was submitted as a Christmas ad.

Palm oil is extracted from the fruit of the Oil Palm trees. It is an efficient crop and a highly versatile oil, which has resulted in it being used in the manufacture of all sorts of products – from pizza to shampoos; from detergents to diesel. However, palm oil production is a major driver of deforestation and is destroying the habitat of endangered animals like the orangutan. A large part of the palm oil produced is exported to other countries (European Union, China, India, etc.) where it is used for a variety of purposes, including conversion to Biofuel.

In thinking about the geographies of palm oil, consider the following:

Indonesia and Malaysia currently account for 86% of the global palm oil production, and palm oil production is increasingly contributing to the 1.5% annual deforestation rate in these countries (Fargione, Hill, Tilman, Polasky, & Hawthorne, 2008).

The population of orangutans in Borneo has fallen by 80% over the past 75 years as a result of habitat destruction. The Sumatran Orangutan was declared critically endangered in 2016 (Emont, 2017).

The impact of biofuels on climate change is not clear: “Our analyses suggests that biofuels [such as palm oil], if produced on converted land, could, for long periods of time, be much greater net emitters of greenhouse gases than the fossil fuels that they typically replace” (Fargione et al., 2008, p. 1237) 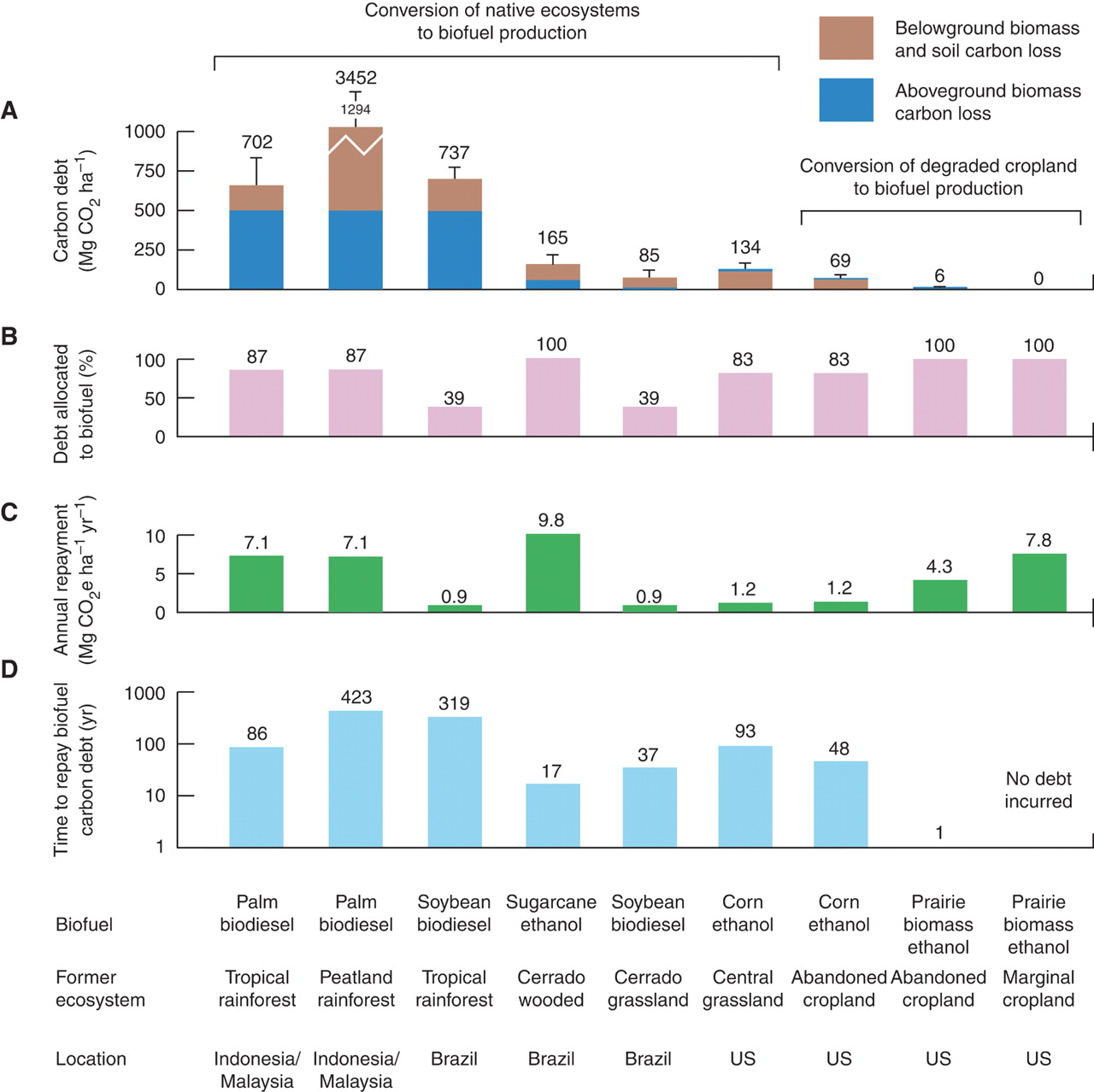 However, the palm oil story is much more complicated. Consider the following:

‹ Lesson 7 Overview up Lesson 7 Reading ›
GEOG 430: Human Use of the Environment