Equivalent projections preserve areal relationships. This means that comparisons between sizes of land-masses (e.g., North America vs. Australia) can be properly made on equal area maps. Unfortunately, when areal relationships are maintained, shapes of landmasses will inevitably be distorted—it is impossible to maintain both.

In Figure 5.5.1 below, shape distortion is most pronounced near the top and bottom of the map. This is because the poles of Earth (North and South) are represented as lines the same length as the equator. Recall that lines of longitude on the globe converge at the poles. When these convergence points are instead mapped as lines, landmasses are stretched East-West, which means that to maintain the same area, landmasses must be compressed in the opposite direction. In the map below, Russia (and other landmasses) are represented at the proper size (compared to other landmasses on the map) but their shapes are significantly distorted.

The projection property of equivalence is perhaps best understood by contrasting its properties with a popular projection that greatly distorts area—the Mercator projection (Figure 5.5.2). 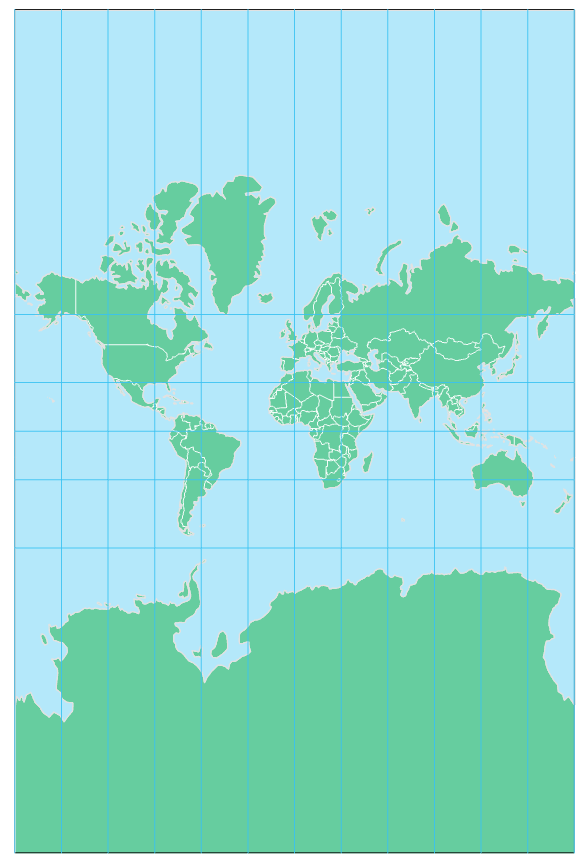 The Mercator projection results in a significant distortion of areas, particularly at locations far from the equator. In order to maintain local angles, parallels (lines of latitude) are placed further and further apart as you depart from the equator. The website thetruesize.com demonstrates this effect.

Despite this, the Mercator is useful for some purposes. It has historically been used for navigation—it is efficient for routing as any straight line drawn on the map represents a route with a constant compass bearing (e.g., due West). This “line of constant compass bearing” is commonly referred to as a rhumb line or loxodrome. The Mercator is a conformal projection.

Conformal projections preserve local angles. Though the scale factor (map scale) changes across the map, from any point on the map, the scale factor changes at the same rate in all directions, therefore maintaining angular relationships. If a surveyor were to determine an angle between two locations on Earth’s surface, it would match the angle shown between those same two locations on a conformal projection. 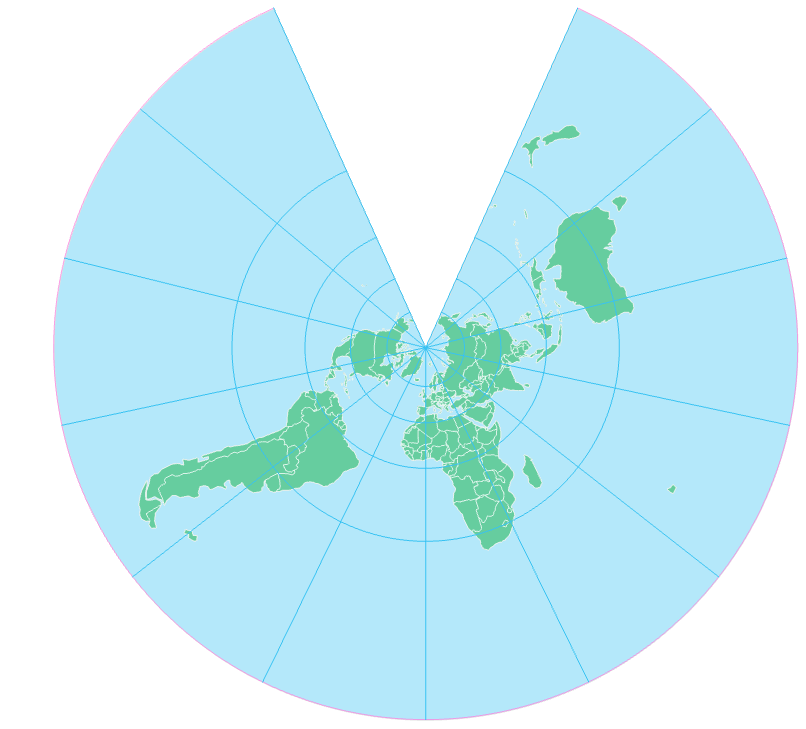 As mentioned previously, the angle-preserving nature of conformal projections makes them useful for navigation. Any path across Earth that follows a constant compass bearing is called a rhumb line, or loxodrome. Any straight line drawn on a map based on a Mercator projection is a rhumb line. Rhumb lines and loxodromes facilitate navigation, as navigators prefer to follow a straight-line route on the map and set their compass direction accordingly. 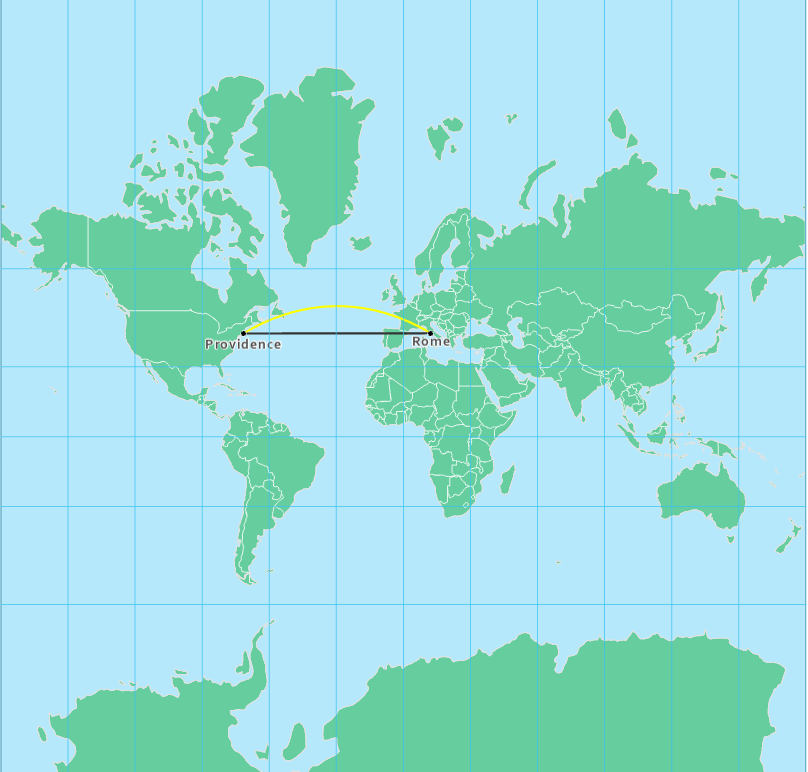 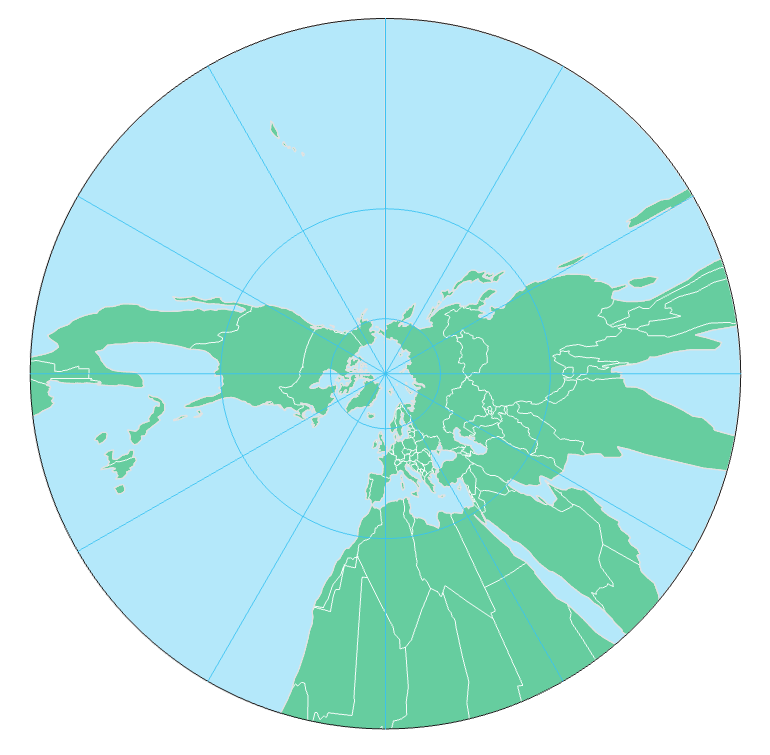 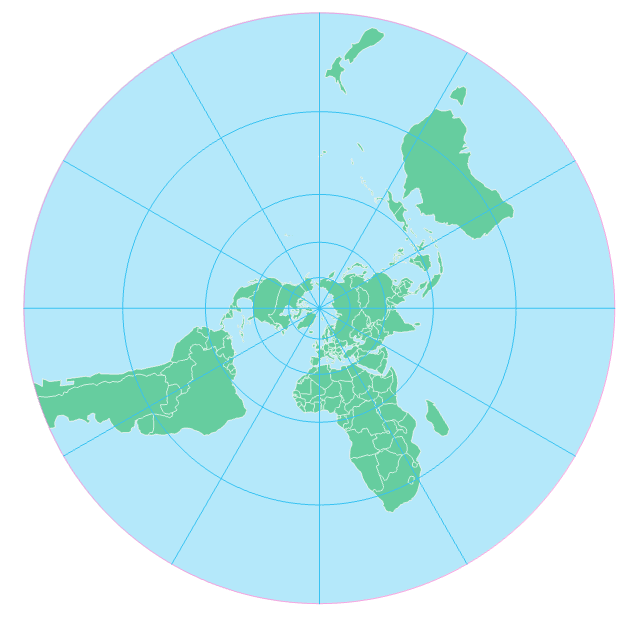 In the azimuthal equidistant projection (Figure 5.5.8, left) distance can be correctly measured from the center of the map (shown by the black dot) to any other point. In two-point Equidistant projection (Figure 5.5.8, right), correct distance can be measured from any two points to any other point on the map (and, thus, to each other). In the example above, those two points are (30⁰S, 30⁰W) and (30⁰N, 30⁰E). These values were supplied as parameters to GIS software while projecting the map—a process called projection customization. When customizing your own projection, you will select locations relevant to your map’s purpose. 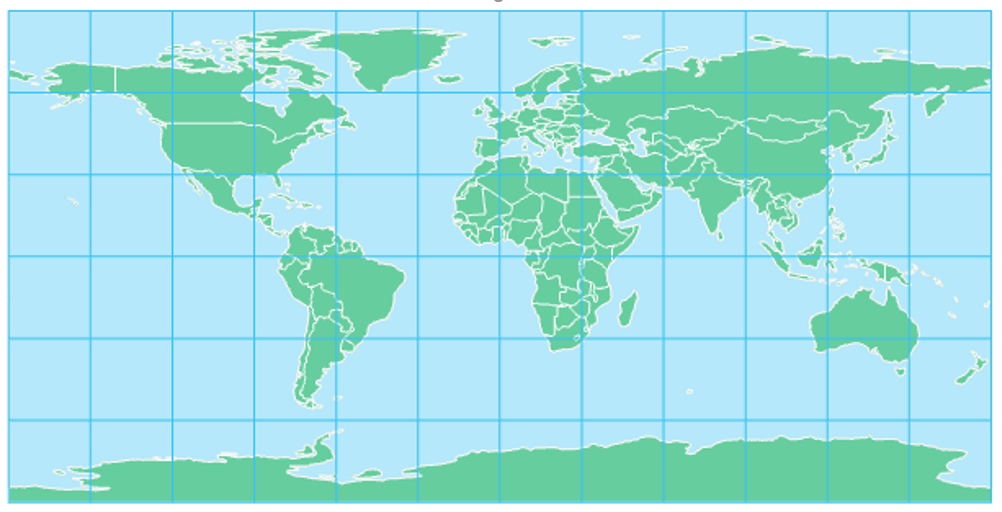 Imagine you are planning a flight path and tasked with finding the shortest route from Alaska to New York. Which map would you use? Why? Would the map you use first to draw the route be different than the map you would use while traveling?

So far, we have discussed maps that preserve areal (equivalent), angular (conformal), distance (equidistant), and directional (azimuthal) relationships. As demonstrated by the previous examples, maps that preserve certain properties do so at the expense of others. It is impossible to preserve angular relationships, for example, without significantly distorting feature areas. For this reason, another class of projections exists—compromise projections.

Compromise projections do not entirely preserve any property but instead provide a balance of distortion between the various properties. A popular example is the Robinson Projection, shown in Figure 5.5.10 below. Note on this projection how the landmasses appear more similar in shape and size to what is seen on a globe compared to their appearance on a projection that preserves a specific property entirely (e.g., The Mercator). 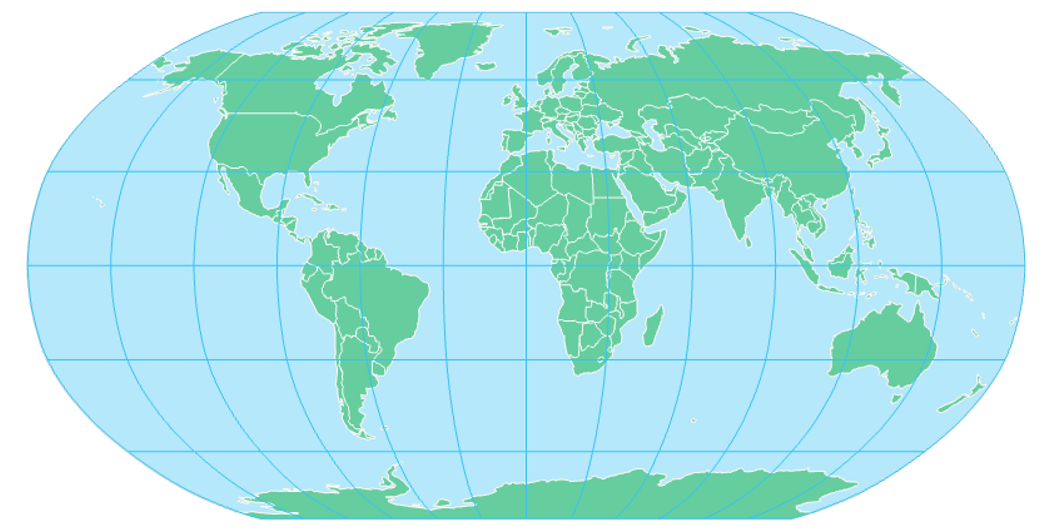 The interrupted nature of this projection severely distorts (by dividing) water bodies, and so would not be useful for maps related to oceanic data, or those intending to visualize routes across Earth’s (connected) surface. These distortions, however, allow the map to display a more accurate representation of landmasses’ sizes and shapes. Note that while the divisions on the projection shown in Figure 5.5.11 are over water, divisions over land are also possible, though not as popular.

Many projections are available in ArcGIS and other software, some of which are imaginative and fun (e.g., the Berghaus star; Figure 5.5.12) and all of which can be customized to suit a map’s location and purpose. We will talk more about how to select an appropriate map projection in the next section. 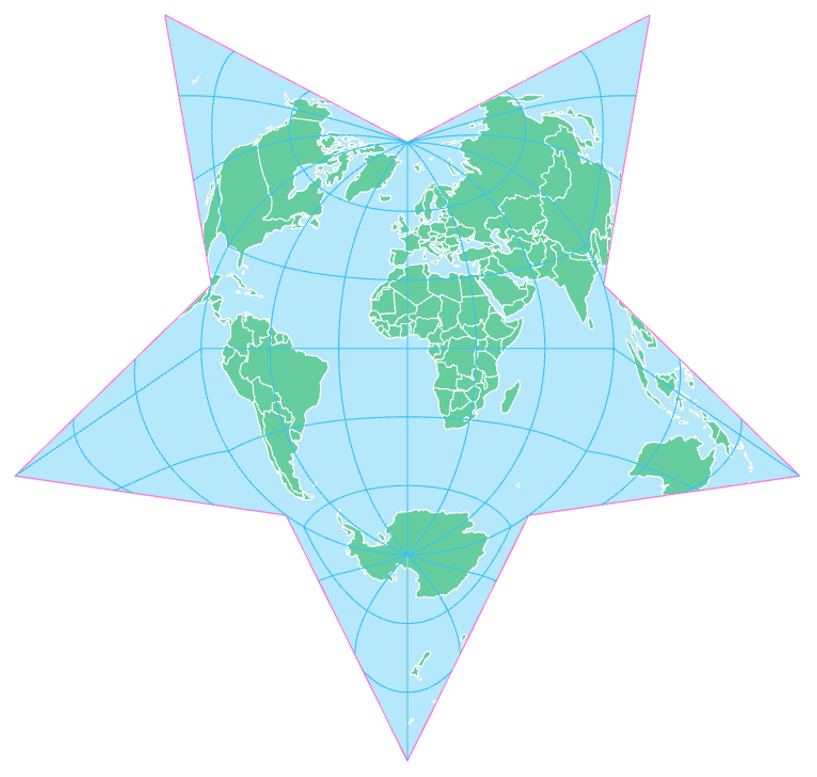 ‹ Characteristics of Projections up Choosing a Projection ›
GEOG 486: Cartography and Visualization