Symbolizing layers based on attribute values

Choropleth maps, proportional symbols maps, and on-the-fly feature filtering all provide alternative functionality to the typical "dots on a map" mashup. How can you achieve these things with Leaflet? In this section of the lesson, we'll talk about how to create Leaflet symbols based on attributes in your data. You can then apply these symbols to vectors to get various types of maps, such as choropleth maps based on class breaks.

First, it's important to be clear that symbolizing layers on the client using Leaflet code is not the only way to achieve choropleth maps, proportional symbols, etc., on the web. Earlier in this course, you became familiar with dynamically drawn WMS maps defined by SLD styling, and tiled maps defined by CartoCSS. In these approaches, you do the cartography on the server rather than the client. Server-side maps are most appropriate for advanced cartographic effects. They may also result in better performance when hundreds or thousands of features are in play.

Why, then, are we discussing making our specialized maps with Leaflet styles when so many other cartographic tools lie within reach? The reason is that defining symbols on the client opens the door to flexibility and interactivity.

In order to create a styling rule based on some attribute value, it's first necessary to read the attribute. How do you do this in Leaflet?

Let's consider a dataset that I downloaded from the Buenos Aires open data portal showing subway ("subte") lines. Each subway line is composed of many polyline segments. Each polyline segment has an attribute stating which subway line it belongs to (e.g., "LINEA B"). I've created a GeoJSON file out of this and I want to display it in a web map using unique colors for each subway line, like this: 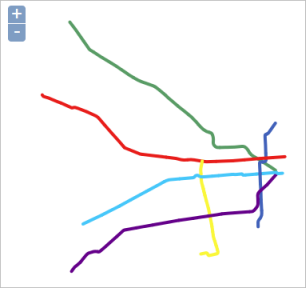 First, let's take the easy case where the color value is directly coded into the attribute table. Notice the COLOR field below which contains color hex values for each line segment:

If you are fortunate enough to have this setup and the colors work for you, then you can apply them directly to the color property when you define the layer style. In Leaflet you can use the syntax feature.properties.<PROPERTY> to get the value of any feature attribute:

The above code creates a vector layer from the variable subteData which comes from a GeoJSON file. To style the layer, the subteStyle function reads the hex value from the COLOR field and inserts it in the color property of the layer. Notice how the syntax feature.properties.COLOR is utilized to read the color value.

Although the above technique is convenient, it's not always practical. What if the colors provided in the file aren't appropriate for your map? Fortunately, in our scenario, you could work around this by providing color values in your JavaScript (i.e., your client-side) code based on the name of the subway line.

Let's look at how you'd apply some style rules on the client side using Leaflet. Examine the following variation on the code we viewed previously. This code produces the exact same map:

The above example employs a function subteStyle to read the attribute LINEASUB from each feature, thereby figuring out the name of the subway line (LINEA A, LINEA B, etc.). If/then logic is applied to find the appropriate color to use based on the subway line name. Finally, this color is applied to a style returned by the function.

Proportional symbols based on numeric attributes

If you have a field with some numeric attribute, such as the length of a subway line or the number of riders per day, you may want to size the symbols proportionally so that big values are represented with a bigger symbol. Let's consider an example where we have a GeoJSON dataset showing statistics for some of South America's largest metro rail systems. You'll get more familiar with this dataset in the lesson walkthrough, but here's the basic attribute table and map: 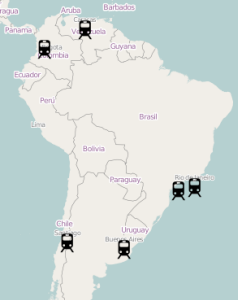 In the above image, the metro systems are all drawn using the same symbol. But let's suppose that you wanted to proportionally size the symbols so that the more stations in a metro system, the larger the map symbol. Notice the STATIONS attribute contains this information. The desired map would look something like the following: 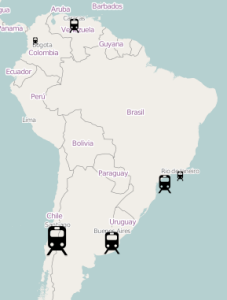 In the above code, iconSize is a two-item JavaScript array containing the width and the height in pixels that should be applied to the icon. Also, notice the use of the pointToLayer property, which is necessary when you want to replace the default Leaflet markers with your own graphics.

Symbols for data classes based on numeric attributes

In some situations, it may be more appropriate to break up your numerical data into various classifications that are symbolized by graduated colors or some similar approach. This is especially true for line and polygon datasets that are sometimes harder to conceptualize using proportional symbols. The boundaries for your classes (in Esri software you may have heard these referred to as "class breaks") could be determined based on equal interval, quantile, natural breaks, or some other arbitrary scheme. 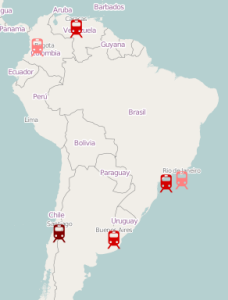 To symbolize data classes in Leaflet, we'll read one of the feature attributes, then use if/then logic to check it against our class breaks. The code below defines the three classes used in our metro rail example. Each class references a different SVG symbol with its unique hue of red:

Although the above may look like a lot of code, notice that half of it is just setting up the icons. A function that classified lines or polygons might be much simpler because a single style could be defined with a varying stroke or fill color based on the attribute of interest.

If you intend to use a classification system such as Jenks natural breaks, equal interval, quantile, etc., you must calculate the break values yourself (or find a library that does it) before defining the rules. You can either do this by hand or add more JavaScript code to calculate the values on the fly.

Ways to limit feature visibility based on attributes

In some situations, you may want to display only a subset of the features in a dataset, based on some attribute value or combination of values. (If you're familiar with Esri ArcMap, this is called a "definition query".) Suppose you wanted to show only the metro systems whose COUNTRY attribute was coded as "Brazil": 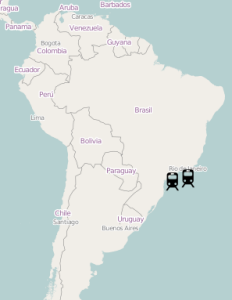 You can do this directly in the filter property when you create the layer in Leaflet. Here you write a function that evaluates a feature and returns a value of true or false. Leaflet will only draw features for which a value of true is returned:

The filter function in the above example tests for features where the COUNTRY property equals "Brazil". Note that the above example simply reads an attribute, it does not do a spatial query to find the bounds of Brazil. Your website will run much faster if you can preprocess the data to put a country attribute on each metro system, rather than trying to figure that out on the fly using spatial processing in a web environment.

Now, let's look at a scenario with a numeric attribute. Suppose we wanted to show only the metro systems with over 75 stations: 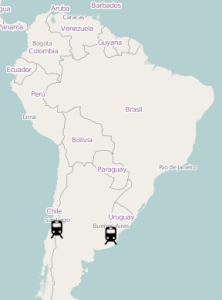 This could be accomplished with the following filter:

In the code above, note the query for a STATIONS value that is greater than 75.

Leaflet offers a variety of options for symbolizing data on the client side based on attribute values. You should not feel limited to using the default symbology or a single symbol type for the entire layer.

Creating Leaflet styles can require some trial and error, along with some skillful debugging. You'll have more success if you start with a working example and tweak it piece by piece, frequently stopping to test your alterations. This section of the lesson is deliberately code-heavy so that you will have many examples available to get you started.

‹ Overview up Spicing up your mapping site with controls ›
GEOG 585: Open Web Mapping