Sometimes, the availability of capital plays a decisive role in the location of industries. For the purposes of this course, the term “capital” has two possible meanings. First, capital may include physical assets such as buildings, machines, and inventory. Second, capital also includes stock certificates, receipts, and money used for investments. Both of these types of capital are necessary to one degree or another for all manufacturing endeavors.

For those involved in running any kind of business, access to capital is not free. Even if a manufacturer owns the assets needed to operate his or her business, the allocation of that capital has a price. For example, opportunity costs are involved. If a manufacturer owns all the assets needed to operate his or her plant, and if these assets are valued at $1,000,000.00, he or she must consider the costs associated with tying up that amount of capital in the operation. If that capital were invested in some other way, how much might it yield? In order to decide whether a business is profitable or not, an entrepreneur must rationally consider the earning potential of the capital that he or she has committed to the enterprise. In the example above, the owner of the plant could invest $1,000,000 in a certificate of savings and realize a yield of three or four percent. Moreover, investing in this way would involve little risk. Therefore, in this simple case, at the minimum, the opportunity costs would be somewhere between $30,000 and $40,000 per year. A farmer once remarked that over the years, he had invested over $2,000,000 in his operation. After thinking about that for a few minutes, he concluded that if one can afford to farm, he or she does not need to. Clearly, he could have invested the $2,000,000 in a certificate of deposit at 4% interest, and received a return of $80,000.00 each year, without turning a hand.

The costs of capital are also variable relative to location. In some places, it is possible to gain access to capital assets at minimal costs, while in others it is not. In some countries, borrowing money is almost impossible (e.g., in some Islamic nations, it is not legal to charge interest). In others, it is relatively easy.

Native American reservations illustrate that location can make a great amount of difference relative to access to capital. Because indigenous lands are generally collectively owned by tribal members (but held in trust by the US government), it is difficult for people who live on reservations to borrow money in order to start businesses or build homes. Banks cannot use reservation lands to secure loans because, if the borrower fails to pay, they cannot foreclose. Furthermore, even tribal members who have access to the capital needed to construct improvements such as houses, or business establishments are often reluctant to do so, because they do not own the land upon which these facilities will be built. In recent years, Indian nations have addressed this dilemma by providing loans to tribal members, and by formalizing land-use rights on reservations. Even so, gaining access to capital remains difficult on many reservations.

Finally, capital is sometimes used to overcome the costs of gaining access to an effective labor pool. As long as labor is relatively inexpensive and effective, manufactures will tend to rely on it. When labor costs exceed the costs associated with capital improvements (e.g., machines that can replace human labor), employers will generally choose to invest in the machinery. Machines offer some advantages over labor in that they do not require vacations, or time off, and they do not leave for better jobs. On the other hand, they wear out, break down, and require constant repair. Additionally, machines require a large initial investment (up-front). The decision of whether to replace workers with machines is similar to the decisions farmers once had to make about replacing horses with tractors. Tractors were expensive, required technical knowledge, and often broke down. Horses, on the other hand were familiar, and readily available. On the other hand, horses had to be fed and attended to even when they were not working, whereas tractors could be parked without much attention until needed. Farmers soon chose the tractor over the horse. 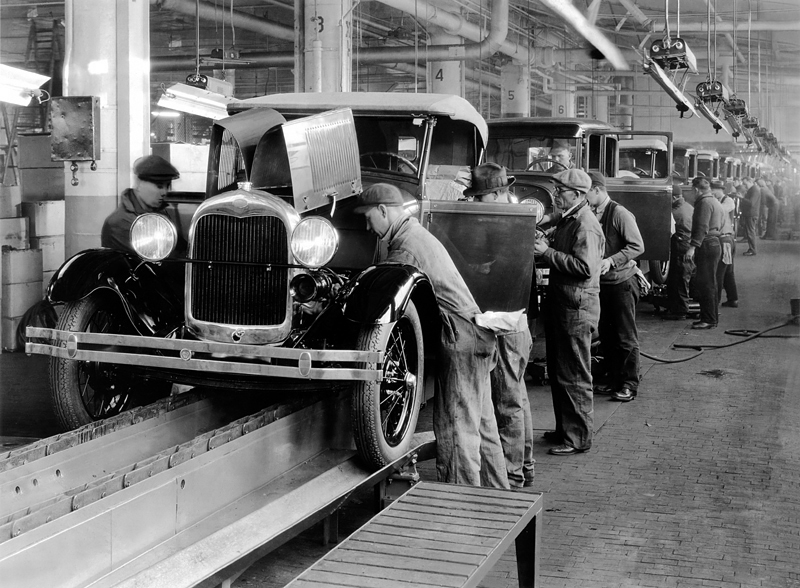 The photograph above shows the Ford Motor Company Plant in operation about eighty years ago. Notice that many workers are involved in assembling these Model A Fords. 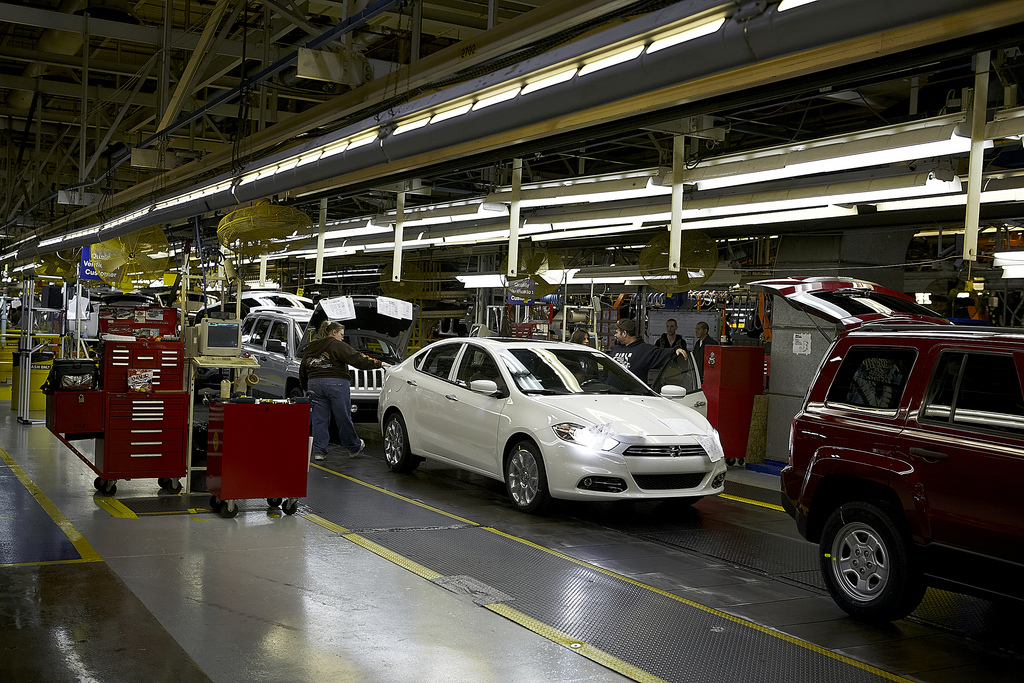 Sometimes it is possible for firms to alter the costs of one of the factors of production. For example, a manufacturer might find it beneficial to locate further from a market or a resource base (thereby incurring additional transportation costs) in exchange for lower rent. Additionally, as covered above, investments in machinery can be substituted for labor costs. When there are numerous opportunities for substitution, manufacturers have a greater degree of freedom relative to where they locate their firms.

‹ Labor up The Influences of Product on Location ›
GEOG 597i: Critical Geospatial Thinking and Applications