This assignment is divided into four parts. The first three parts consist of short-answer responses that are worth up to one point each. The applied exercise is worth up to four points. Please use assigned reading and lecture materials as references for your submissions. The grading rubric below provides more details on grading weights.

Write a short essay in which you describe the applied utility of the "gravity model" in evaluating and predicting spatial interaction.

Describe a simple model (both in quantitative and narrative form) that expresses the spatial relationship between two variables (a change in one variable brings about change in another).

Write a short essay in which you describe the applied utility of the "gravity model" in evaluating and predicting spatial interaction.

Describe the applied utility of a sample table and a scatter diagram in establishing that a relationship between two variables exists.

You are a 19th Century medical professional (named Dr. Watson) working in London. Soon after establishing your practice as a physician, you find that you are increasingly inundated with many patients who are suffering from painful stomach cramps, diarrhea, dehydration, high fevers, and nausea. Moreover, quite a few patients have died from this disease. Although you are able to help some to recover by using ice to bring down their body temperatures and by making sure they remain hydrated, you believe that in order to cope with this illness, you must determine its causes and origin. After a few weeks of writing down every observation you have relative to the nature of the disease and the personal profiles of the people who are afflicted with it, you come to believe that the vast majority of the people who catch this sickness live in London's East End. 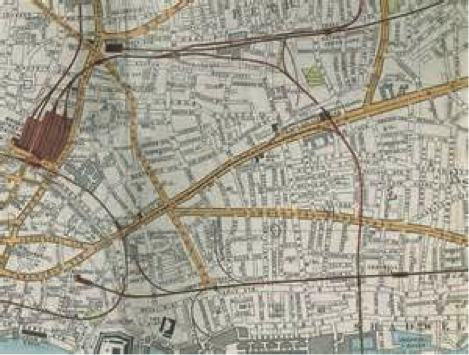 The East End of London in the mid-19th Century was a dangerous, crowded, unpleasant place. It was characterized by filthy, narrow, crowded streets lined with rows and rows of flimsy tenements where poor families often lived in a cheek-to-jowl existence (sometime more than ten people lived in one small room). The blight and foul order was disconcerting to people who visited the East End from other parts of London. Those who lived there, however, became accustomed to the run-down conditions, the crime and violence, and to the noxious smell given off by the hundreds of outdoor privies situated in the tiny back lots of the tenement houses. Moreover, these cramped back lots also contained a community well for each building. The wells that served the tenants were usually shallow, and situated in close proximity to three or four outdoor toilets. Therefore, the contents of the privies continually seeped into the ground water and, hence, into the wells.

By the mid-19th Century, people who lived in the more affluent parts of London were served by city water and sewage systems. Therefore, they were not plagued by the vulgar order of outhouses, and it was not necessary for them to draw water from a well. Moreover, the streets of middle and upper-class London neighborhoods were lined with relatively upscale townhouses, and were served by garbage collectors, street sweepers, and so on.

First, based upon the description above of the East End of London in the mid-19th Century, create a hypothesis about what may have caused this disease to spread throughout the East End while, at the same time, it did not spread throughout the more affluent parts of London. Next, develop a simple research model including a functional equation that will help to test the validity of your hypothesis (in other words, a model that will allow you to test the correlation between variable X and the spread of the disease.

Please check your Syllabus, the Modules page or the Course Calendar in Canvas for specific dates.

As stated above, this deliverable is a short essay that includes a simple spatial research model of your own design. You can use drawing tools in your word processing program to draw the model or use paper and a pen/pencil to draw it and take a picture to upload with your essay. Use whichever tools with which you are comfortable.

Your assignment should be no more than three pages of text, single spaced 12-point Times New Roman font with one inch margins. Add a title and your name on the paper and in your file name.

Upload your assignment to the Lesson 3 Assignment in Canvas.

This assignment is worth 7 points.