What is Cloud Computing?

Cloud computing is a concept and a phrase that has become increasingly popular. However, there are a number of competing definitions for what "cloud computing" entails. One very effective definition of cloud computing, which consists of five essential characteristics, three service models, and four deployment models, comes from the National Institute of Standards and Technology (NIST). The final version of this definition was published in October of 2011, and is available from NIST. During this course, we will explore how the essential characteristics and service models in particular can be used in a GIS context. Let's consider them now in turn.

The five essential characteristics can be hard to recall at times. During one sleepless night, I came up with the mnemonic NO-REM as a way to remember them.

N stands for Network access. Cloud computing services can be accessed from a variety of networked devices, such as workstations, mobile phones, and other servers. A GIS example is a geospatial information service that allows access from browsers and from other servers.

O stands for On-demand self-service. Cloud computing services should be accessible at will, without having to consult and get permission from a human being. A GIS example is the ability to start multiple map servers by using a browser interface.

R stands for Resource pooling. Cloud computing resources such as processing power, storage, and input-output (to use the Von Neumann architecture) are provisioned for different clients from a common set of physical assets. Clients need not know (and often cannot know) exactly where the physical assets are. A GIS example is sharing computers owned and administered by Esri, Amazon, or Microsoft, without knowing or caring how these computers are being provisioned (as long as they stay up!)

E stands for Elasticity. Cloud computing services can be scaled up and down to meet demand and decrease waste. A GIS example is processing a large spatial data set quickly using many cloud computers, which are then discarded when the task is done.

M stands for Measured service. Cloud computing services are paid for by resources used (such as processing power, storage capacity, or number of user accounts). A GIS example is paying for a map server only for the hours it is up and the bandwidth it uses, rather than a whole computer.

All of the GIS examples of the essential characteristics are ones that you will experience during this course.

The three service models have a definite order to them. Infrastructure as a service (IaaS) is the more fundamental layer, followed by Platform as a service (PaaS) and Software as a Service (SaaS). I was quite impressed with the diagram explaining IaaS, PaaS, and SaaS at venturebeat.com, so I slightly changed it and re-made it below: 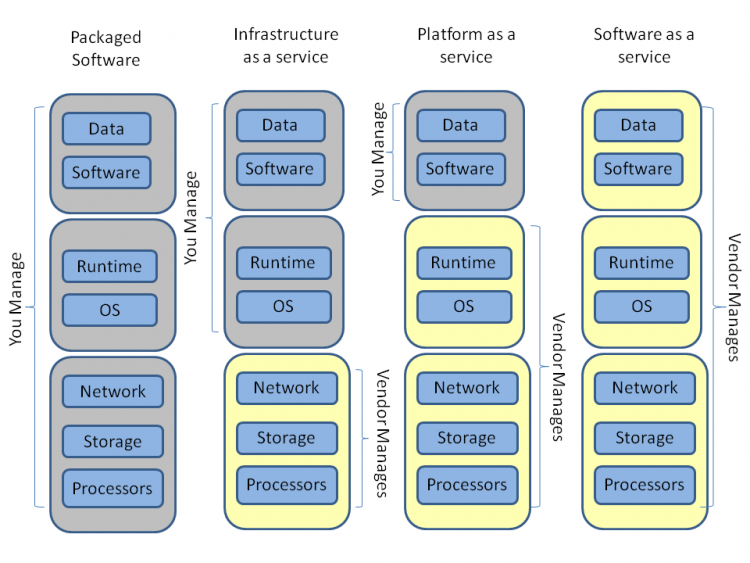 As you can see, in the traditional, computer-under-your-desk model, you manage everything. Moving to a Cloud Infrastructure as a Service (IaaS) means that the von Neumann troika of IO, storage, and processors, are managed by the provider, and you bring everything else. In a GIS context, this would mean that you rent computing power from a cloud provider, and use it to solve GIS problems. We'll use the Amazon Elastic Compute Cloud (EC2) running ArcGIS Server to study IaaS.

A Cloud Platform as a Service means that the vendor provides the physical layer, the operating system, and the runtime. You are still able to add your own data and write software that runs on the cloud platform. Facebook, from a developer's perspective, offers a PaaS because APIs (programming tools) are available to write programs that run in Facebook. Google App Engine is another example: Google gives you the computing power and you write the apps.

Software as a Service (SaaS) is a bit easier to understand. You just use it without having to install anything or write any code. Online email is a very good example of SaaS. So is Google Maps. Many GIS and mapping companies are offering mapping and spatial data processing through a SaaS model.

Next, we will get started on the leading IaaS: Amazon's EC2.