The first step in the design is to decide on the scale of imagery or its resolution and the required accuracy. Once those two requirements are known, the following processes follow:

For the flight plan, the planner needs to know the following information, some of which he or she ends up calculating: 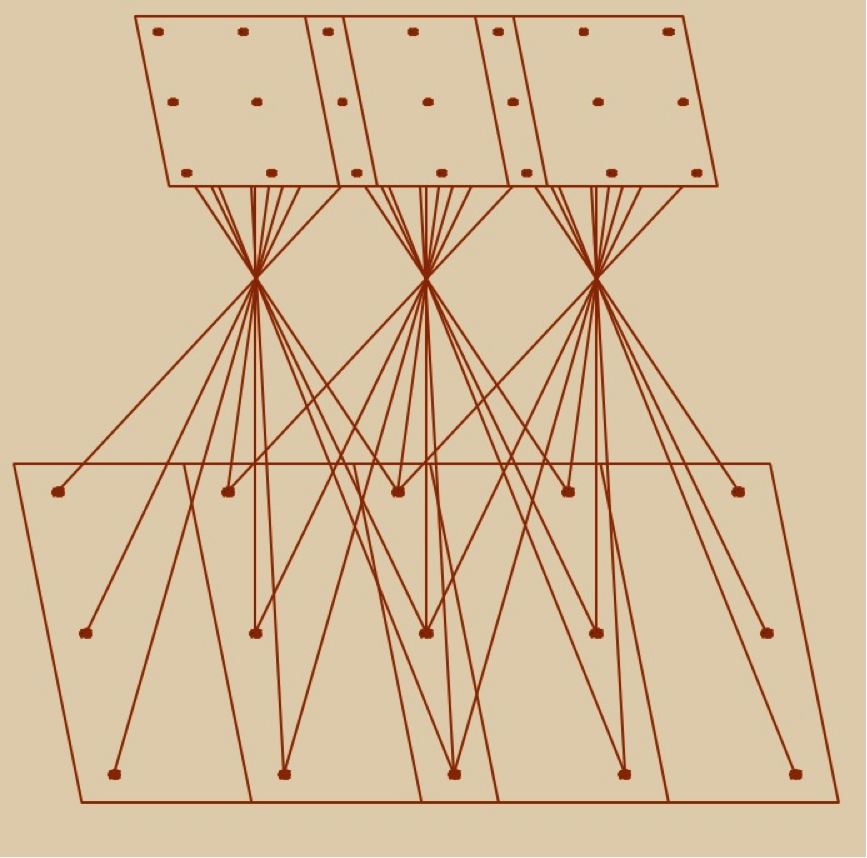 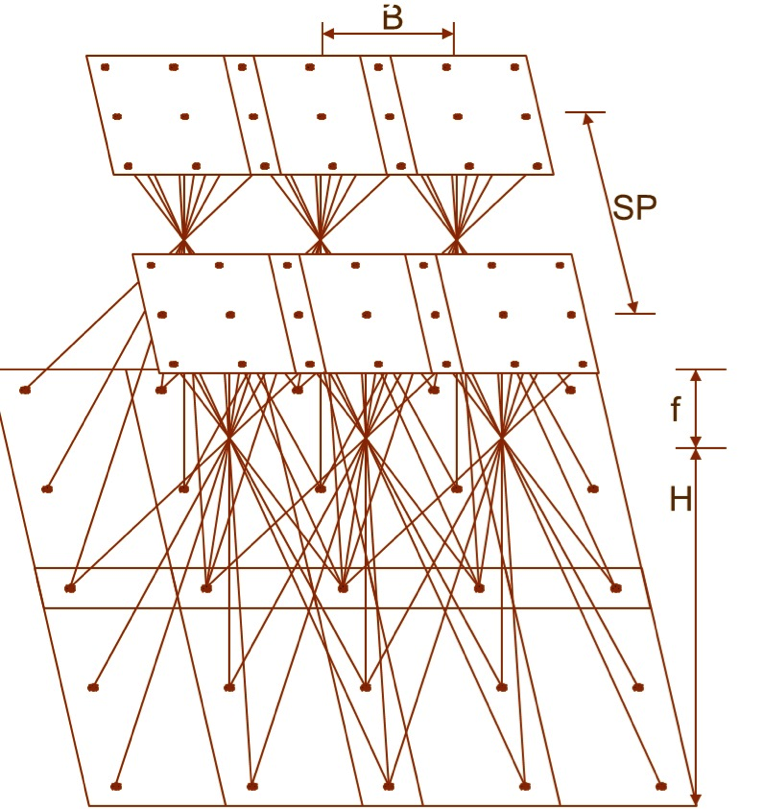 Once we compute the ground coverage of the image, as it was discussed in the "Geometry of Vertical Image" section, we can compute the number of flight lines and the number of images and draw them on the project map (Figure 4.10), aircraft speed, flying altitude, etc. 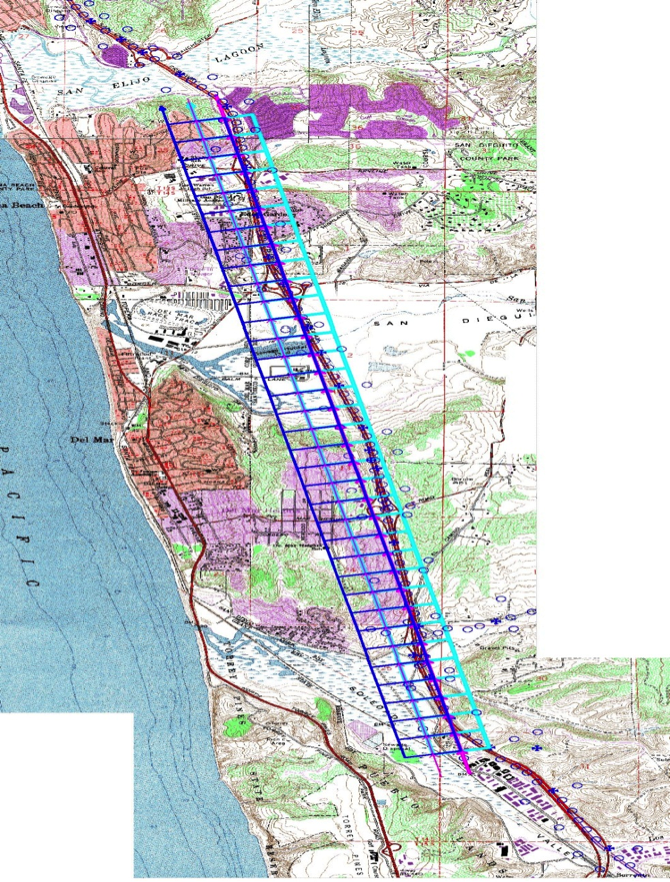 Before we start the computations of the flight lines and images numbers, I would like you to understand the following helpful hints: 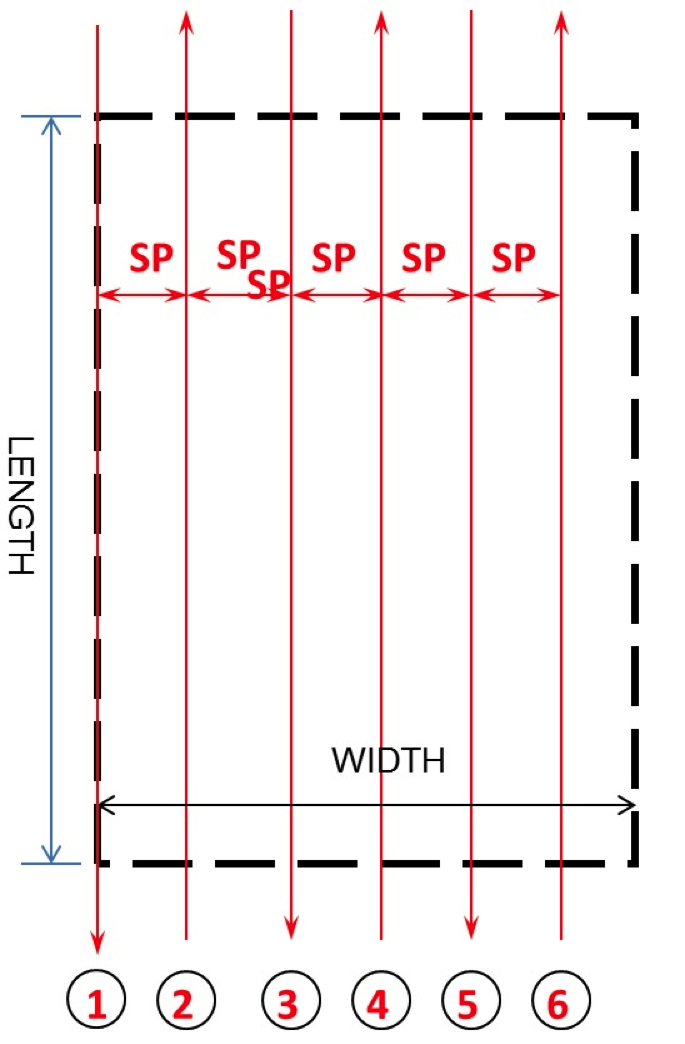 Now, let us start figuring out how many flight lines we need for the project area illustrated in Figure 4.13, to the right. Figure 4.13 shows rectangular project boundaries (in black dashed lines) with length equal LENGTH and width equal WIDTH that was designed to be flown with 6 flight lines (red lines with arrowheads). To figure out the number of flight lines needed to cover the project area, we will need to go through the following computations:

In Figure 4.13, you may have noticed that the flight direction for each flight line alternates between North-to-South and South-to-North from one flight line to the adjacent one. Flying the project in this manner increases the aircraft fuel efficiency so the aircraft can stay longer up in the air.

Once we determine the number of flight lines, we need to figure out how many images will cover the project area. To do so, we need to go through the following computations:

Figure 4.14 is the same as Figure 4.13 with added blue circles that represent photo centers of the designed images. The circles are only given to one flight line, and I will leave it to your imagination to fill all the flight lines with such circles. 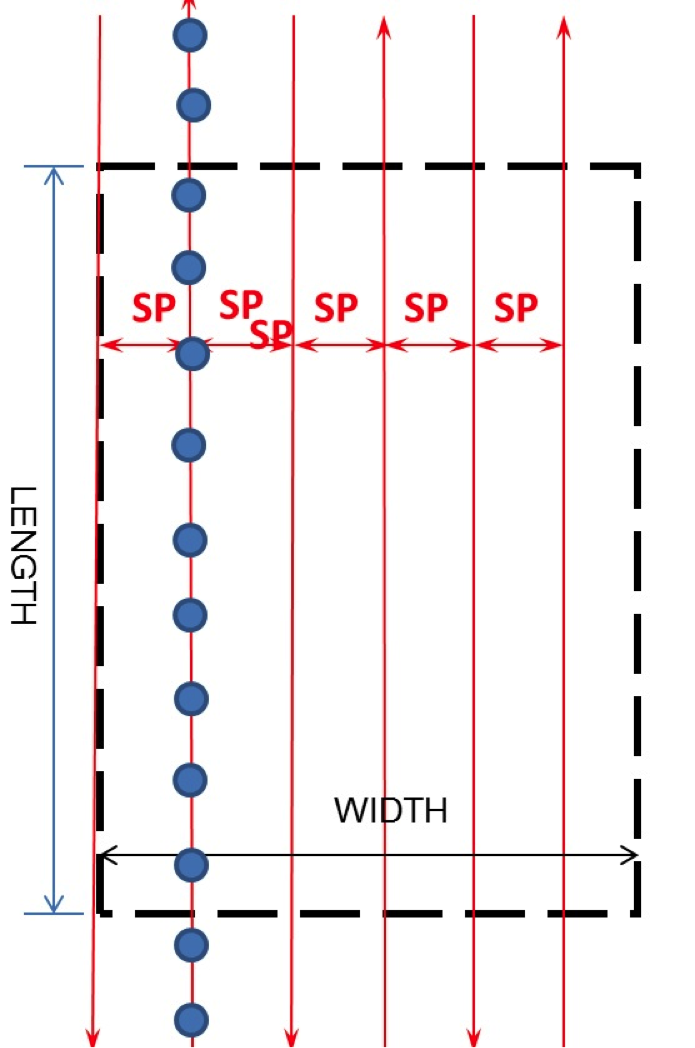 Flying altitude is the altitude above certain datum the UAS flies during data acquisition. The two main datum used are either the average (mean) ground elevation or the mean sea level. Figure 4.15 illustrates the relationship between the aircraft and the datum and how the two systems relate to each other. In Figure 4.15, we have an aircraft that is flying at 3000 feet above average (mean) ground elevation, represented by the blue horizontal line in the figure. We also have the mean terrain elevation (the blue horizontal line), situated at 600 feet above the mean sea level. Therefore, the flying altitude will be expressed in two ways, those are: 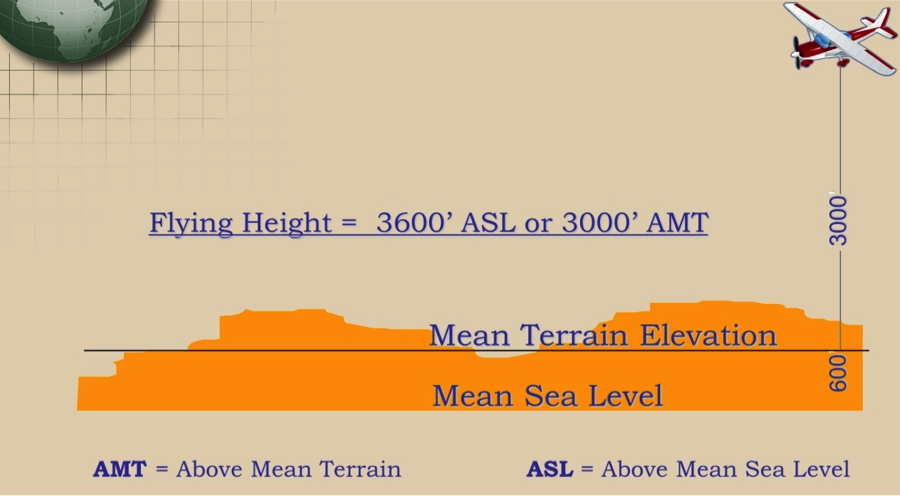 We now need to determine at what altitude the project should be flown. To do so, we go back to the camera internal geometry and scale as we discussed in section 4.3. Assume that the imagery to be acquired with a camera with lens focal length of f and with CCD size of b. We also know in advance what the imagery ground resolution or GSD should be. The flying altitude will be computed as follows:

from which, H can be determined.

Controlling the aircraft speed is important for maintaining the necessary forward or end lap expected for the imagery. Fly the Aircraft too fast, and you end up with less forward lap than anticipated, while flying the aircraft too slowly results in too much overlap between successive images. Both situations are harmful to the anticipated products and/or the project budget. Little amount of overlap reduces the capability of using such imagery for stereo viewing and processing, while too much overlap results in too many unnecessary images that may affect the project budget negatively. In the previous subsections, we computed the airbase or the distance between two successive images along one flight line that satisfy the amount of end lap necessary for the project. Computing the time between exposures is a simple matter once the airbase is determined and the aircraft speed is decided upon.

When the camera exposes an image, we need the aircraft to move a distance equal to the airbase before it exposes the next image. If we assume the aircraft speed is (v) therefore the time (t) between two consecutive images is calculated from the following equation:

For example, if we computed the airbase to be 1000 ft and we used aircraft with speed of 150 knots, the time between exposure is equal to:

A project area is 20 miles long in the east-west directions and 13 miles in the north-south direction. The client asked for natural color (3 bands) vertical digital aerial imagery with a pixel resolution or GSD of 1 ft using a frame-based digital camera with a rectangular CCD array of 12,000 pixels across the flight direction (W) and 7,000 pixels along the flight direction (L) and a lens focal length of 100 mm. The array contains square CCDs with a dimension of 10 microns. The end lap and side lap are to be 60% and 30%, respectively. The imagery should be delivered in tiff file format with 8 bits (1 byte) per band or 24 bits per color three bands (RGB). Calculate:

Looking into the project size (20x13 miles) and the one-foot GSD requirements, a mission planner should realize right away that image acquistion task for such project size and specifications can only be achieved using a manned aircraft.

The camera should be oriented so the longer dimension of the CCD array is perpendicular to the flight direction (see Figure 4.12).

Past experience with projects of a similar nature is essential in estimating cost and developing delivery schedule. In estimating cost, the following main categories of efforts and materials are considered:

Once quantities are estimated as illustrated in the above steps, hours for each phase are established. Depending on the project deliverables requirements, the following labor items are considered when estimating costs:

The table in Figure 4.16 provides an idea about the going market rates for geospatial products that can be used as guidelines when pricing a mapping project using manned aircraft operation and metric digital camera and lidar. The industry needs to come up with a comparable table based on Unmanned operations. There is no good pricing model established for UAS operation as the standards and produicts quality are widely varialble depending on who offers such services and whether it fall strictly under the "Professional Services" designation.

After the project hours are estimated, each phase of the project may be scheduled based on the following:

The schedule will also consider the constrains on the window of opportunity due to weather conditions. Figure 4.17 illustrates the number of days, per state/region, available annually for aerial imaging campaigns. Areas like the state of Maine have only 30 cloudless days per year that are suitable for aerial imaging activities. 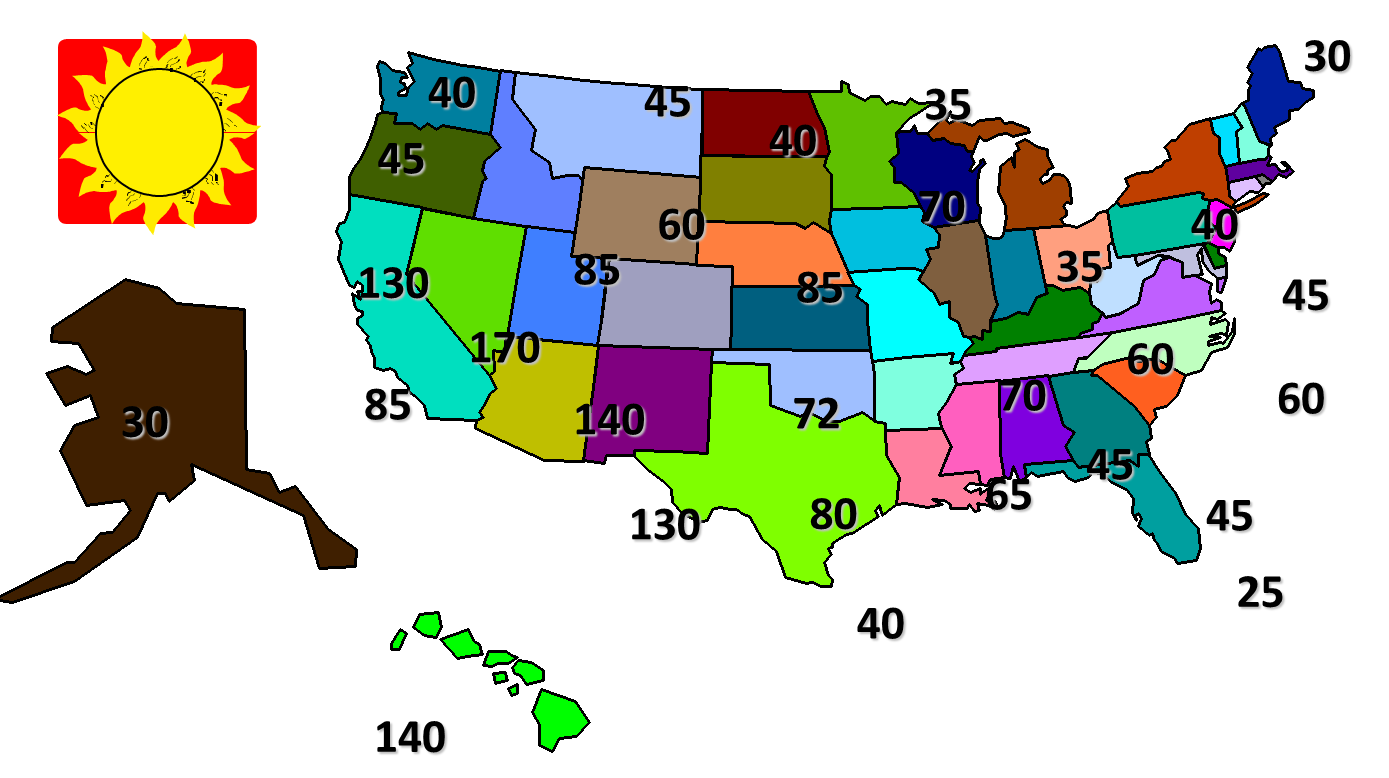 Chapter 18 of Elements of Photogrammetry with Applications in GIS, 4th edition

For practice, develop two flight plans for your project, one by using manual computations and formulas as described in this section and one by using "Mission Planner" software. Compare the two.