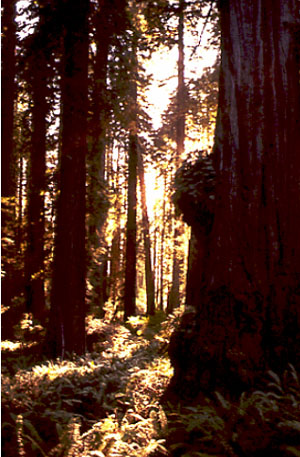 Weather and Climate in the Redwoods

Redwood National Park has the feel of a soaring, gothic cathedral—only more so. One of the great Sequoia sempervirens trees may live for two millennia, but when it falls, new trees will grow from the fallen trunk. (Hence the scientific name, which means “ever-living sequoia” in Latin.) The redwoods are the tallest trees on Earth, commonly more than 200 feet (60 meters) and with the very tallest soaring above 379 feet (more than 115 meters). If such a tree growing on the goal line fell over, it would stretch the length of a football field and the top branches would extend into the stands at the end. Ferns growing in the duff beneath the redwoods are lost, inconsequential, despite occasionally standing shoulder-high or above. Reports from early loggers included trees even taller than any known today.

The redwoods lie in the southern part of the great, coastal, temperate rainforest that extends from San Francisco north along the Pacific coast to southeastern Alaska, and includes the Olympic National Park discussed earlier. The redwoods actually grow in soils that came from rocks much like those of the Olympic.

Redwoods are mostly restricted to a narrow band along the coast with 50-100 inches (1.25-2.5 meters) of rain per year, and with frequent to continuous fogs that slow the drying-out of the trees. The trees, in turn, help maintain the fog; cutting the trees may decrease the fog, making it difficult or impossible for the redwoods to re-grow. The wood of redwood trees is highly resistant to fire and rot, and so is greatly sought after. Logging of old-growth redwoods, thus, is a contentious issue; an estimated 96% of the old-growth forest has been cut already, and with typical ages of 500-700 years and maximum ages of about 2000 years, a new "old-growth" forest is not returning soon, but some people want to cut the remaining 4% or so of the original old-growth redwood forest. Fossil evidence shows that redwoods once were much more widespread. U.S. parks that preserve fossilized redwood include the Petrified Forest, Yellowstone, and the Florissant Fossil Beds.

A bit farther south and higher on the slopes of the Sierra, but still in a wet zone, are the great sequoias of Yosemite, Kings Canyon and Sequoia National Parks. These Sequoiadendron gigantea are close relatives of the redwoods. Although not as tall (“only” up to 311 feet, or about 95 meters), the great sequoias are more massive. The General Sherman tree, at 275 feet tall and 102.6 feet around, is generally considered to be the largest single-trunk tree on Earth (and much larger than whales and such). The great sequoias are extremely fire-resistant, and require fire to clear-out competing trees and trigger sprouting of sequoia seeds. Fire suppression instituted after the parks were established led to a period with few or no new sequoias sprouting; now, prescribed burns and procedures that allow some natural fires to burn are returning the forest to a more-natural state. Sequoias can live 3500 years. 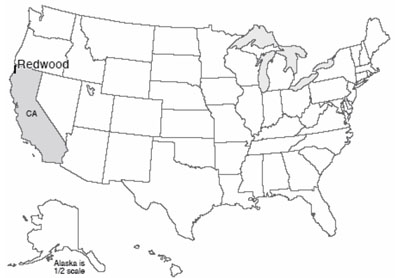 A few hundred miles to the east of the redwoods and sequoias lies the U.S. Great Basin. All across this region of Nevada and adjacent states, rainfall typically is less than 10 inches (25 cm) per year, with Death Valley receiving just 1.6 inches (4 cm) per year on average. Sage and cactus grow here instead of towering trees - in response to the very hot, dry conditions. Yet, above the clouds, this region receives the same amount of sunshine as do the redwoods. Clearly, the climate is much more than just the amount of sunshine above the clouds. We now take a brief tour through the basics of climatology. This should help you to understand climates, weathering, erosion, and glaciers, and a number of important near-surface processes.

Why the Wind Blows

The wind blows, and the deep mantle convects, for more-or-less the same reason. Both the air and the mantle are capable of flowing, and both are heated from below and cooled from above. The amount of heating and the rate of flow are VERY different, which helps make the world interesting. But you might see a thunderstorm and imagine hot-spot formation, and there is at least a little similarity between a cold front and a subduction zone.

The equator receives more sunshine because of simple geometry. Imagine for a moment that Dr. Alley’s head is the Earth, with his nose on the equator and the bald spot on top the North Pole. (See the picture; you can congratulate yourself on good taste if you didn’t imagine a bad joke about the South Pole here.) If he stands in front of a sun-lamp “sun,” he’ll never get a sunburn on his North-Pole bald spot, but he will on his equatorial nose. 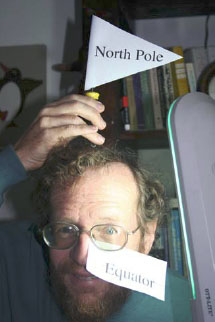 Dr. Alley’s equatorial nose and ear can be sunburned by the sun lamp, but his north-polar bald spot receives only a glancing blow from the “sun’s” rays and so needs no sunscreen. Similarly, the Earth’s equator is strongly heated by the sun while the poles are not, almost entirely because of the curvature of the planet; the Earth’s equator is closer to the sun than the poles by only about 0.004%, not enough to matter.
Credit: R.B. Alley

This means that land at the equator becomes hotter than the poles. If we had no atmosphere or oceans, the equator would become too hot for life as we know it, and the poles too cold. However, the atmosphere and oceans take some of the excess heat from the equator to the poles, making both habitable to humans. 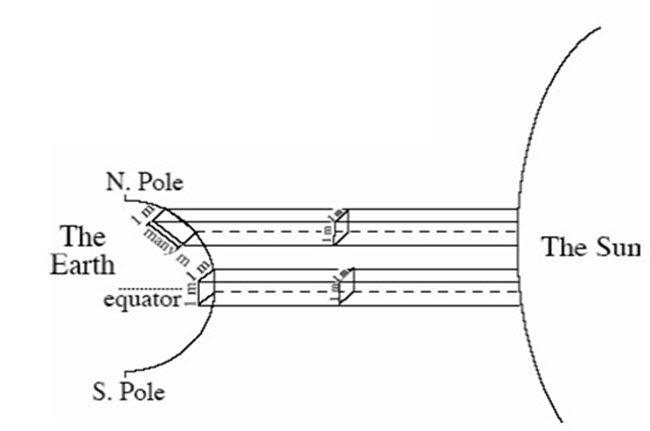 As the sun heats the land at the equator, the land heats the air above, and the air expands, rises, and then moves poleward in convection currents. Some of the energy in this hot air goes to warm the regions along the way, but eventually all the energy is radiated back to space. The sunlight that comes in is called shortwave radiation (because its waves are short—this stuff really isn’t that complex a lot of the time!), and the radiation going out has longer waves and is called longwave radiation. We will see later that the difference between shortwave and longwave is important in understanding the greenhouse effect. For now, note that the global energy budget is balanced—the total amount of energy brought in by short waves and absorbed in the Earth system is very nearly equal to the total amount of energy taken out by long waves to space. (At the moment, we are sending out a little bit less than we receive, and the Earth is warming, because we humans are changing the composition of the atmosphere. But, once we quit doing that, the Earth will get back to balance.) A factory balances the total amount of stuff coming in and going out, but little auto parts come in and big cars go out; the earth balances the total energy coming in and going out, but short waves come in and long waves go out. And, the uneven heating drives the wind, and the wind plus uneven heating of the oceans drive ocean currents.

Because the Earth rotates, the winds end up turning rather than going straight from equator to pole, and this makes the weather much more interesting than it would be on a non-rotating planet. If you want to explore this a little more, see the optional Enrichment.

Air is cooled in two major ways—by losing energy to its surroundings (longwave radiation to space, or warming the polar regions), or by being lifted. As air is lifted, it expands and cools. You can experience this by letting air out of a high-pressure bicycle tire, and feeling how cold the air becomes as it expands. Lifting may be caused when one air mass moves over another along a front, or when air moves over mountains. In either case, higher elevations have lower temperatures.

Cooling causes condensation of the water vapor in the air because cooler air can hold less water, and the condensation makes clouds and then rain or snow. Our friends in meteorology would point out that condensation requires cloud condensation nuclei—little dust particles and such that water drops can grow on—plus a little supercooling to get things started, or else extreme cooling if the nuclei are absent, but if you make a parcel of air sufficiently cold, clouds form and then rain or snow. (And if it bothers you that cooler temperatures exist higher, but that cold air sinks, see the optional Enrichment—there is really no problem, and it all does make sense.)

Evaporation of water requires energy. Remember that everything we see—including water—is made of fast-moving particles (atoms, or groups of atoms called molecules). The faster-moving particles are the hotter, higher-energy ones. In a pool of water (the ocean, or a drop of sweat on your brow) the faster, hotter water molecules break the attraction to their neighbors and escape, or evaporate, leaving the slower, cooler ones behind. Evaporation thus cools the remaining water. More heat then is conducted or radiated into the water from its surroundings (because heat flows from warmer to cooler places, and the evaporation has left the water drop cooler), cooling the surroundings while fueling more evaporation. This is why sweating cools a body. Condensation is the opposite of evaporation, and when condensation occurs, the heat that was added to the water to cause evaporation is released back to the air.

Now, consider a parcel of air rising up the Coast Ranges above the redwoods, and up the Sierra Nevada above the giant sequoias. As the air rises, the pressure on it (the weight of the air above) becomes smaller, and the air expands and cools. Once the air has cooled enough, it becomes saturated with water, and further cooling causes condensation. But the condensation releases some heat that partially counteracts the cooling from expansion. Air in which condensation is not occurring cools by about 1ºC for each 100 meters it is lifted, but air from which clouds and rain are forming only cools about 0.6º C for each 100 meters it is lifted (5ºF per 1000 feet dry, and 3ºF per 1000 feet wet). The difference represents the heat released by the condensation. The heat released by condensation originally came from the sun, and was stored in the air in the water vapor when water evaporated, cooling the ocean. As the vapor condenses, the sun’s energy is turned into heat that one can feel.

Strong moisture-laden breezes from the Pacific rise as they hit the redwood-clad Coast Ranges of California, cooling and raining to nourish the rainforest. The winds continue upward over the Sierra, cooling by 3ºF per 1000 feet upward, as they precipitate. By the time the wind has risen 15,000 feet to get over the high peaks, it has cooled about 45ºF (25ºC), and has rained or snowed almost all of its moisture. When this wind continues on down the other side, it is dry, and warms at the dry rate of 5ºF per 1000 feet. When this wind returns to sea level, the air has warmed about 75ºF (42ºC) on the way down. Hence, the wind comes down about 30ºF (17ºC) warmer than when it went up, and the difference is the heat that was stored when the rainwater evaporated from the ocean. A comfortable onshore breeze at 70ºF on the Pacific Coast will be 100ºF when it reaches the valleys on the other side. Add a little solar heating through the cloudless desert air, and it is no wonder that Death Valley is hot! (And yes, the wind usually goes around the Sierra rather than over, so you haven’t learned everything about meteorology in one short chapter of a geology book; but it’s a start.)