Weathering, Weather, and the Badlands

The Badlands of South Dakota are much more than just the land to the south of Wall Drug Store (“Have you dug Wall Drug?”). Today, the Badlands may be most valuable as a wonderful piece of the shortgrass prairie that once covered much of the western Great Plains. The sea of grass and flowers that nourished the bison and the native Americans of the plains has been almost entirely broken to the plow. But in the upper prairie of the Badlands, the grass still waves in the breeze like an ocean, the pronghorn still course the grass, and one can, perhaps, imagine what the prairie once was.

The Badlands are a creature of the Rockies. During one of the phases of uplift of the Rockies (especially about 30 million years ago), the exposed rocks were first weathered (changed into other forms, such as clay), and then transported from the mountains onto the plains to the east, or on down the Mississippi River system to its delta. Those sediments deposited on the Great Plains piled up until the mountains were almost completely buried, and an unbroken ramp of sediments extended to the Mississippi. The sediments were mostly river deposits, on flood plains or in channels of rivers, although some ash-falls from volcanoes and other wind-blown sediment were present.

Eventually, renewed uplift of the Rockies rejuvenated the streams draining through the Badlands, causing these streams to cut down through the older deposits. In these deposits are uncounted fossils of the animals and plants that lived on those floodplains. The fossils tell a story of gradual drying from wetter times of the past, and of changes in the types of things living there.

The types of clays and volcanic ashes in the Badlands, combined with the climate in which they now occur, do not make fertile, stable soils. The clays expand and shrink on wetting and drying, breaking roots, triggering small landslides, and helping keep the slopes unvegetated. Water doesn’t flow easily through clay, so rainfall doesn’t soak in but flows rapidly across the surface during the rare but intense rainstorms, eroding channels in the clays and washing away vegetation; this also leaves the soils dry between rainfalls so that plants have difficulty sustaining themselves.

That a lush prairie can grow on the flatter regions is testament indeed to the hardiness of the prairie ecosystem. But, on steep slopes, the pastel-colored muds eroded from the old Rockies are exposed, along with the fossils they contain. We will explore stories of this sort over the next few weeks. We start with weathering, the changes that can turn hard rocks to soft clays of the type observed in the Badlands.

Squeezing mud, perhaps with a little heating, produces a sedimentary rock called mudstone or shale, and with further heating and squeezing this rock changes to various other things on the way to melting (you may have met shale→slate→schist→gneiss somewhere; we saw gneiss in Rocky Mountain, and all of them in the Enrichment, last time). The materials in mud are stable (or at least nearly so) under Earth-surface conditions but not deep in the Earth. And minerals produced deep in the Earth usually are not stable under surface conditions. Compared to deep in the Earth, the surface is wetter, has more oxygen, has a wider range of acid/alkaline conditions (with acid especially common at the surface), and has many more organisms trying to break down the minerals to extract fertilizer.

As a general rule, the further surface conditions are from conditions under which a mineral formed, the more rapidly that mineral changes at the surface. (This “rule” has many exceptions, but it is often useful, especially with silicate minerals.) The changes that occur at a place are called weathering. Moving the products of weathering is called transport. Weathering and transport together make erosion.

To turn big pieces into little ones, the big ones need to be cracked. Cracks in rocks are caused or enlarged by processes including:

Probably the most important mineral that grows in cracks is ice, but others do too. For example, the mineral thenardite, Na2SO4 (no, you don’t have to memorize the formula!) can add much water to its structure (10 molecules for each Na2SO4), expanding in the process. If thenardite exists in an environment that alternately is wetted and dried, the resulting expansion and contraction from adding and losing water may break the rocks around it. Increased humidity will cause the mineral to rearrange and take up water, expanding and wedging open cracks. Continued wetting may dissolve the mineral, which will move deeper in the crack in the rock and then be redeposited and dehydrated during a subsequent dry time. Then further wetting will cause re-expansion and more wedging. This process is breaking many of the ancient monuments of Egypt as increased irrigation and other activities increase humidity in some places.

Chemical changes are often more interesting and more complex than physical ones. There is a great range of possible changes, and you must know a lot of chemistry to really appreciate all of them. In general, the main agents of weathering are weak acids. Rainwater picks up carbon dioxide from the air and becomes a weak acid called carbonic acid. In soils, water may pick up more carbon dioxide plus organic acids from decaying organic material, becoming a stronger acid.

When acid attacks a rock, the results depend on what minerals are present, and how warm and wet and acidic conditions are, among other things. We can sketch some general patterns. Suppose we start with granite, a silica-rich rock that forms in a few continental and island-arc settings, including when bodies of melted rock solidify beneath the andesitic volcanoes of subduction zones. 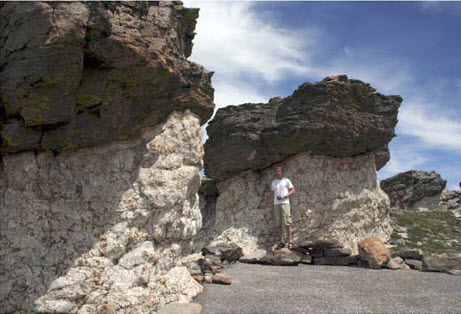 Granite usually is composed of four minerals: quartz (pure silica, which is silicon and oxygen), potassium feldspar and sodium-calcium feldspar (mostly silica, with a little aluminum replacing some of the silicon, and the potassium, sodium or calcium added for balance), and a dark silica-bearing mineral containing iron and magnesium (often a dark mica called biotite). Interestingly, almost 99% of the atoms in the rocks of the crust of the Earth are oxygen, silicon, aluminun, iron, calcium, sodium, potassium or magnesium, the common elements in granite. We discuss granite here because it does so well representing the whole crust. 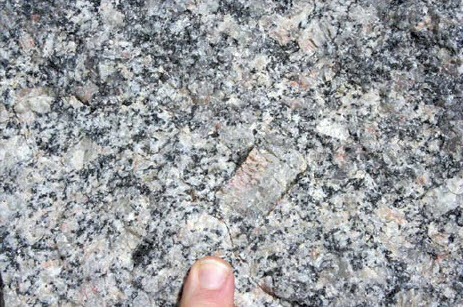 Close-up view of a part of a granite boulder, also in Rocky Mountain National Park, with Dr. Alley's index finger for scale. The large crystal just above and right of the finger is a feldspar (there are two different kinds of feldspar here, but they look similar). Small gray spots are quartz, and the darker spots are biotite mica.
Credit: R.B. Alley

One can write a sort of equation:

The calcium and silica dissolved and washed to the ocean are used by sea creatures to make shells, the dissolved magnesium washed to the ocean usually ends up reacting with hot rocks at spreading centers to make new minerals in the sea floor, and the dissolved sodium accumulates in the ocean to make it salty. (Eventually, evaporation of ocean water in restricted basins causes deposition of salts including table salt, which is sodium chloride, written NaCl. Also, some salt is taken down subduction zones with the water in the spaces in sediment. So, the ocean does lose sodium as well as gaining sodium.) The rust, sand, and clay left behind, plus a little organic material often including worm poop, become the indispensable layer we know as soil.

You should recognize that this is a very general description of what happens; were it this easy, there would not be hundreds of soil scientists working to understand this important layer in which most of our food grows. In general, the hotter and wetter the climate, the more stuff is removed—rust and quartz sand can be dissolved in some tropical soils, leaving aluminum compounds that we mine for use in making aluminum. In dryland soils, the Ca and Mg may be left behind (forming special desert soils), or even the Na may be left behind, forming salty soils in which little or nothing will grow.

You also should recognize that the “chunks” in soil – rust, clay, sand and organic materials – can be carried away by streams or wind, but as chunks rather than invisible dissolved materials. We discuss this loss of chunks in the next sections. If chunks are carried away more rapidly than new ones are formed, the soil will thin and we will find it difficult to grow food to feed ourselves.

When we were looking at subduction zones, we noted that old, cold sea floor goes down. We now see that it takes some extra magnesium, added from sea water by reactions with the hot rocks at the mid-ocean ridges. Sediment goes down subduction zones, including the calcium- and silica-bearing shells of sea creatures, the rust and clay washed from the continents, and some sea water. When these melt and feed volcanoes, andesite and similar rocks are made during eruptions, or their underground equivalents including granites are produced. The calcium-bearing shells include carbon dioxide, and this plus water escape from the volcanoes to make carbonic acid to attack the new granite. The Earth really does cycle, and recycle, everything! But, going around this loop once takes at least millions of years, and may take a lot longer than that, issues we'll discuss later.