Living on Earth I: Evolution & Extinction 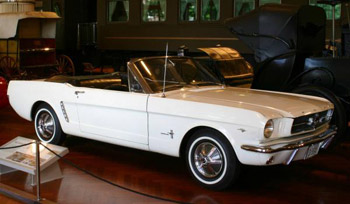 Ah, memory lane. Dr. Alley's best friend in early elementary school had a father who sold "pop" (a.k.a. soft drinks) to dealers in Ohio and often had free samples sitting around, and a mother who drove a 1964-and-a-half white Ford Mustang with a black convertible top. Hard to beat. And what a beauty that car was! Dr. Alley's Hot Wheels Mustang was a 1967, recognizably different from the '65-and-a-half. In fact, he could easily put the Mustangs in chronological order based on the differences between models.

The early geologists of the late 1600s and 1700s had never heard of Ford Mustangs, but those geologists faced a Ford Mustang problem. Recognition of unconformities and other features in the rock record opened a world far older than written records. William Smith had shown the law of faunal succession—that putting the rocks in order put the fossils in order—so biological change had accompanied geological change. But was the biological change gradual, parent-to-child in a great, unbroken evolutionary chain of being? Or did unknown cataclysms, or a tinkering god, or an angry god, repeatedly replace one world with another as Ford would one day replace each model with a new type of Mustang the next year?

Erasmus Darwin was among the evolutionists, and put his ideas in verse in the posthumously published The Temple of Nature (1802):

Organic life beneath the shoreless waves
Was born and nurs'd in ocean's pearly caves;
First forms minute, unseen by spheric glass,
Move on the mud, or pierce the watery mass;

OK, maybe this excerpt wouldn't make a hit song if put to music. But when grandson Charles added observations and mechanism to Erasmus' speculations, the evolutionists won out over the Ford-Mustang "catastrophists." What convinced the scientific community (and a great slice of "polite society") of evolution? We'll try to answer that fascinating question in this lesson.

You will have one week to complete Unit 11. See the course calendar for specific due dates.

As you work your way through the online materials for Unit 11, you will encounter a video lecture, several vTrips, some animated diagrams (called GeoMations and GeoClips), additional reading assignments, a practice quiz, a "RockOn" quiz, and a "StudentsSpeak" Survey. The chart below provides an overview of the requirements for this unit.

If you have any questions, please feel free to email "All Teachers" and "All Teaching Assistants through Canvas conversations.

On the following pages, you will find all of the information you need to successfully complete Unit 11, including the online textbook, a video lecture, several vTrips and animations, and an overview presentation

Students who register for this Penn State course gain access to assignment and instructor feedback, and earn academic credit. Information about registering for this course is available from the Office of the University Registrar.