One of the most difficult concepts to internalize when just beginning to study geology is time. Humans live in a relatively fast-paced world. We watch the seconds tick by, live through semesters, and mark the passage of years with anniversaries. We sometimes go back hundreds of years when thinking about historical events, or even occasionally thousands of years when examining early human history. Geology, however, often works on time scales of millions of years. Geologists call this ‘deep time’.

Take some time to explore, Chronozoom, a tool being developed by earth scientists at the University of California, Berkeley. This tool puts different time scales in perspective of each other, and within the largest time scale: the universe. The bar along the top shows time in millions of years ago (ma), or thousands of years ago (ka). Because the timeline is in terms of the past, the present is 0 at the far right, while the number of years ago extends to the left. Above the time bar on the top left, you can select the time scale you want to look at: Cosmos, Earth, Life, Pre History, and Humanity. From the Cosmos time scale, click on ‘Humanity’ on the top left to get a sense of how briefly humanity has existed in the grand scheme of things.  NOTE: Instead of linking student to Chronozoom, lets ask Nooreen to recored a screen cast explaining deep time as she demonstrates the tool.  May help the student understand it a little more. WE can publish on youtube and use that embed code below. The text below can serve as the transcript of what she is doing.

Now let’s focus on the geologic time scale. In Chronozoom, double click on the appropriate box within the ‘Earth and Solar System’ box. You’ll see that the length of the geologic time scale extends a little beyond 4500 Ma (or 4.5 billion years), the age of the earth. Most geologists focus on the largest box to the far right, the Phanerozoic Eon, or the last 540 million years. This is because the earth is constantly changing, and finding rocks or environments to study from beyond this time, while not impossible, is difficult.

Now that you have a sense of where geologic time fits into the universe, and where human time fits into geologic time, take a look at this geologic time scale, published by the Geological Society of America (GSA). This chart is read from the bottom right (oldest) to the top left (youngest). In geology, time is always represented with the oldest object of interest (rock, fossil, event) at the bottom, and the youngest at the top. This is because when you examine a sequence of rocks, if there has been no deformation, the oldest rock will be on the bottom, and the youngest will be on the top. This is called the Principle of Superposition, and we’ll talk about it in more detail in a bit. 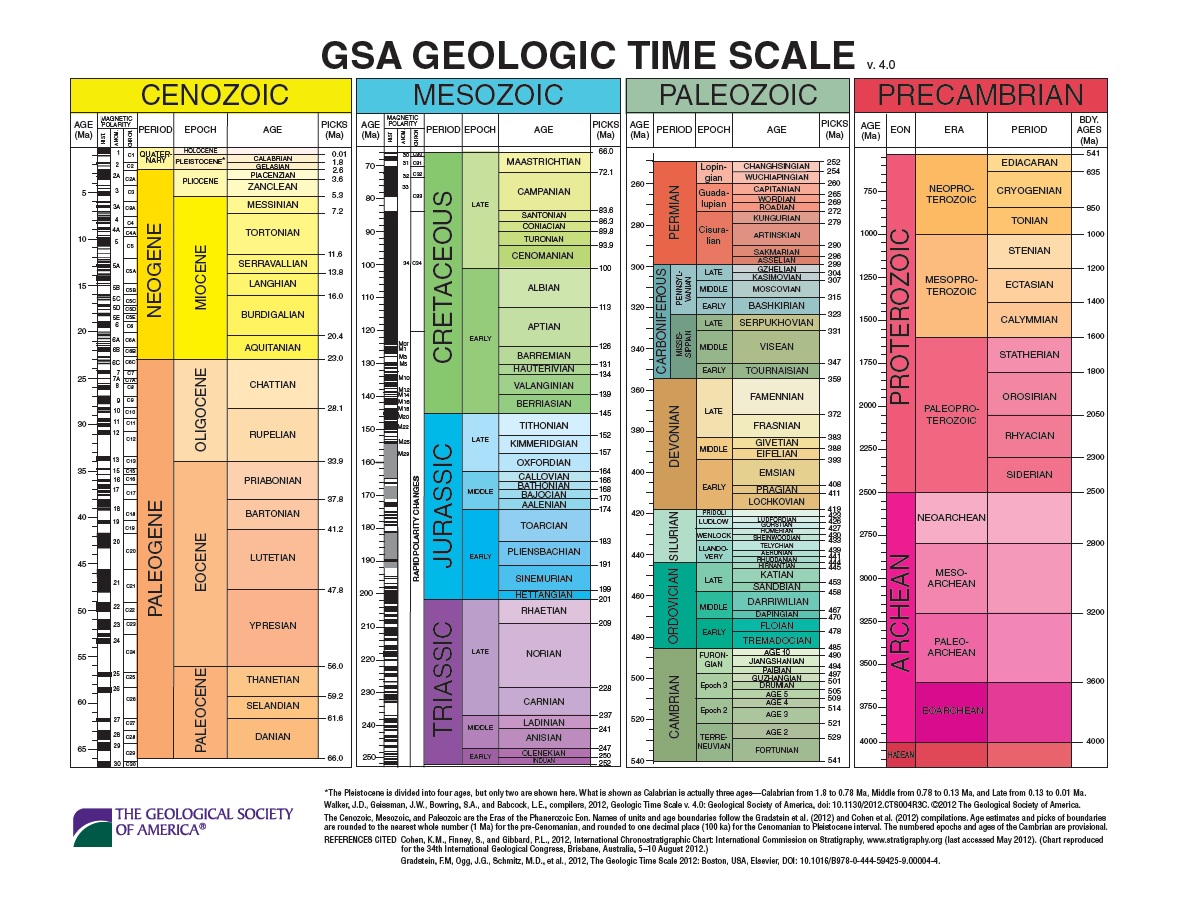 On the left of each major section (Cenozoic, Mesozoic, Paleozoic, Precambrian) is a small column that says AGE (Ma). ‘Ma’ means ‘millions of years ago’. The earliest anatomically human remains are somewhere between 90 and 190,000 years old, and the oldest recorded human history is 5 thousand years old. Society as we know it kicked off in the Pleistocene epoch, at the very end of this time scale.

To give you a sense of the time scales over which the earth changes, here are some points of interest. See if you can find them on Chronozoom!

Stop and think about it

What are a couple of the oldest events you can think of? Where do they fall on this time scale?