Energy is linked to mobility, national wealth, climate change and wars. We want energy that is cheap, reliable and environmentally benign, but we forget there are no magic bullets and at this point in time, no single energy source alone meets all three criteria. Understanding energy systems is critical to making informed decisions about everything from deciding which household appliances to buy and where to locate power plants to incentivizing use of natural gas and drafting national energy policies.

Most of us take our energy-intensive lifestyles for granted—unless the electricity goes off or gas prices reach $4 a gallon—but the commercial production of energy is relatively recent. Just 80 years ago, few rural residents had electricity. Similarly, our demand for petroleum only exceeded national production beginning in the 1950s.

It should come as little surprise that in the past 25 years, energy consumption by primary energy source (oil, hydro, coal, gas and nuclear—to name a few) has increased throughout the world. Worldwide, electricity generation has doubled since 1980—a similar doubling is projected by 2030, according to the International Energy Agency’s World Energy Outlook. What may be surprising is who is driving that increase.

The growth in demand is largely from developing countries where millions and millions of people do not have access to electricity. China’s consumption is growing at about 10 percent a year. Between 2006 and 2010, China doubled its electric power system. Projections are that a similar doubling will occur in the next few years. India is embarking on similar electrification with a rate of growth of electricity consumption of about 5 percent. Estimates are that by 2030, India will have increased its power consumption fivefold. 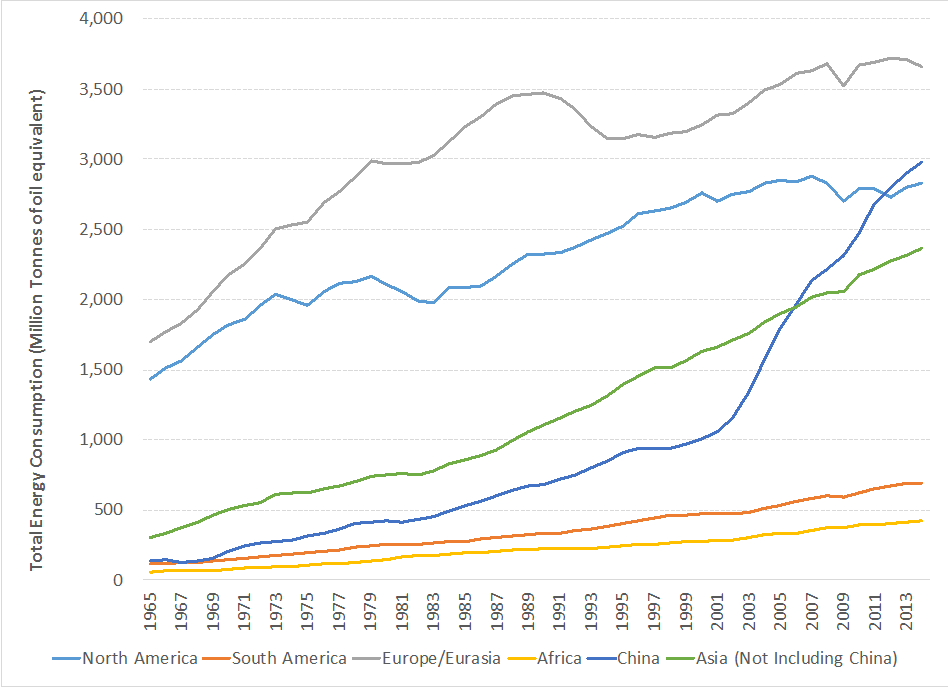 Three main fuels dominate the global energy picture: oil, natural gas and coal. While OPEC—the cartel of oil-producing nations—gets a lot of press, those countries produce only about a third of oil consumed. North America, Russia, the United Kingdom and Norway together produce about what OPEC produces in a year. The remainder of world oil production comes from a large group of small producers – primarily Asian countries and former Soviet states.

OPEC is not as big a player in the natural gas market. The largest gas producers in the world are Russia, the U.S. and Canada, which together produce a little less than half of the world’s supply of natural gas.

The U.S. has more coal than any other country in the world. This is good news for large electricity consumers since about 40 percent of U.S. electricity generation comes from coal, but bad news for the environmentally-minded who are concerned about greenhouse gases and other emissions, particulate matter and heavy metals such as mercury. Recent federal regulations placing restrictions on a large group of pollutants (including emissions of carbon dioxide and other heat-trapping gasses) seem likely to shutter some coal-fired generation plants—and thereby, reduce some emissions. Demand for coal, however, is likely remain strong, particularly as China and India ramp up electricity generation.

‹ Lesson 2: Energy Choices for PA and the US up A Little Light Physics of Energy ›