Visualizing Energy Use in the United States

How different energy sources power different parts of the U.S. economy can be visualized using an energy flow diagram or “Sankey Diagram” like the one from the Lawrence Livermore National Laboratory shown in Figure 2. The diagram looks complicated, but once you get the hang of it you’ll see that it contains an incredible amount of information. Watch the video below to gain a better understanding of how to read the diagram. 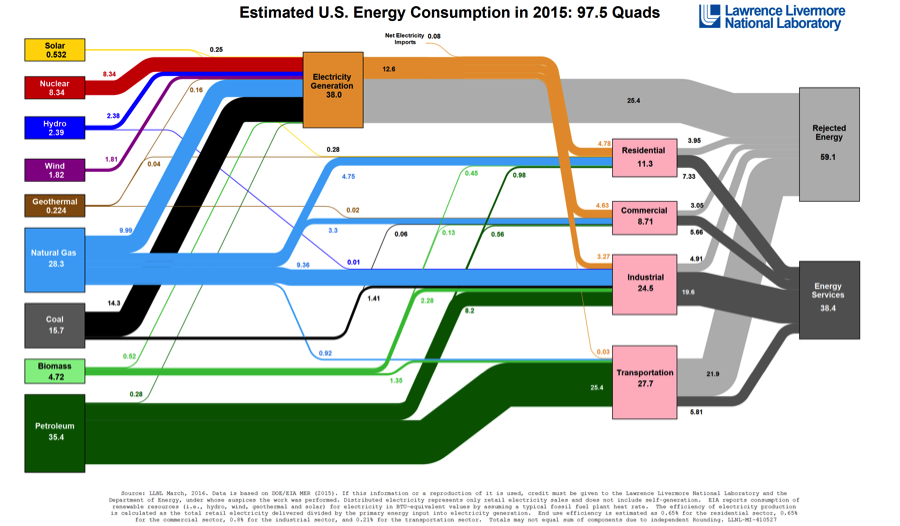 Moving from left to right in the Sankey diagram, the paths coming out of each fuel box illustrate how each fuel is used to power the U.S. economy in one of five ways:

The Sankey diagram thus tells you that around two-thirds of the natural gas used in the U.S. every year goes to power plants and industry, while very little natural gas is used to fuel cars, buses and trucks.

As a point of comparison, look at the boxes for nuclear and petroleum. What differences do you spot in how these fuels are used in the U.S. economy, relative to natural gas? We can see that there is only one path coming out of the nuclear box, which goes directly to the electricity generation box. This means that all nuclear fuel used in the U.S. goes into power plants. (This should not come as a big surprise – we don’t see nuclear-powered cars on the road.) Looking at the paths coming out of the petroleum box, we can see that most of the oil used in the U.S. economy goes either to industrial boilers or for transportation fuel. Very little oil is used in buildings (some people and buildings still use furnaces that run on fuel oil) and even less is used to generate electricity.

Finally, the right-hand part of the Sankey diagram reveals an awful truth about the U.S. energy system: it is incredibly wasteful. Our power plants, cars and buildings just do not use energy very efficiently. You can see this in the two gray boxes on the right-hand side of the Sankey diagram. The darker gray box at the bottom labeled ‘Energy Services’ shows how much of the fuel from coal, oil, natural gas, wind, and so forth is actually put to useful work to move cars, light buildings and so forth. The lighter gray box labeled ‘Rejected Energy’ captures how much energy we waste because we use highly inefficient technologies in our power plants, cars and buildings. Looking at the amount of ‘Rejected Energy’ (59.1 quadrillion Btu) versus ‘Energy Services’ (38.4 quadrillion Btu), we can see that we waste about 60% of the fuel that we use to power the U.S. economy every year. The biggest waste comes from generating electricity (where we waste about two-thirds of all the fuel we put into power plants) and from transportation (where we waste around 80%).