The Principles of Geology

There are several basic principles that geologists use to figure out the history of a rock:

The principle of uniformitarianism states that processes that alter the earth’s crust are the same processes that occurred millions of years ago. Furthermore, the results of processes today are the same as the results of the same processes millions of years ago. This means that we can take our observations of processes that occur today, and observations of the results and know the process that formed it when we see that same result in the rock record. For example, you can look in a stream and see ripple marks in the sand, formed by the flow of water over the sand. If you see ripple marks in the rock record, you can know that a similar process was at work. 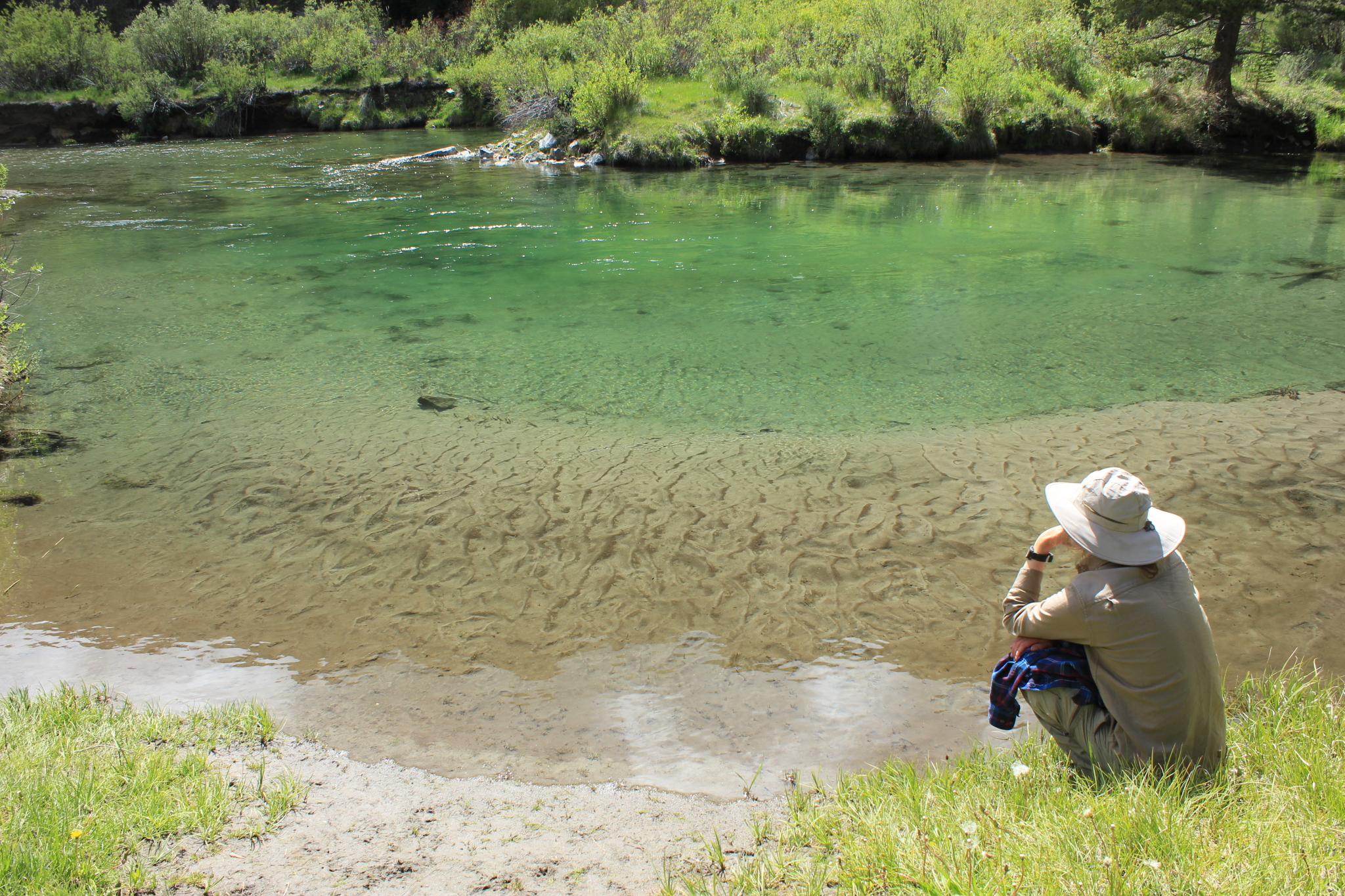 A geologist contemplates the ripples formed in a mountain stream in Idaho.
Nooreen Meghani 2015

The principle of original horizontality states that sediment is deposited horizontally. This is sometimes easier to envision with liquids: imagine pouring water into a cup. The surface of the water is perfectly flat - horizontal. If you dump that water into a bowl, the surface remains flat. Now imagine that you have a jello mixture in the bowl - if you chill it and it solidifies, and then pour a different color on top, You have the two flat layers of jello, one on top of the other. This is similar to how sedimentary rocks form. As water moves sediment from high regions, like mountains, to low regions, like the ocean, the energy of the system decreases until the sediments are deposited in a basin, like a lake or an ocean. More sediment is deposited on top, and over time the whole sequence lithifies (sort of like the jello did in the fridge). The rocks remain horizontal until a force acts on them, pushing (or pulling) them out of their original orientation.

The rocks in this image are sandstone (a sedimentary rock). What do you think is part of their history? 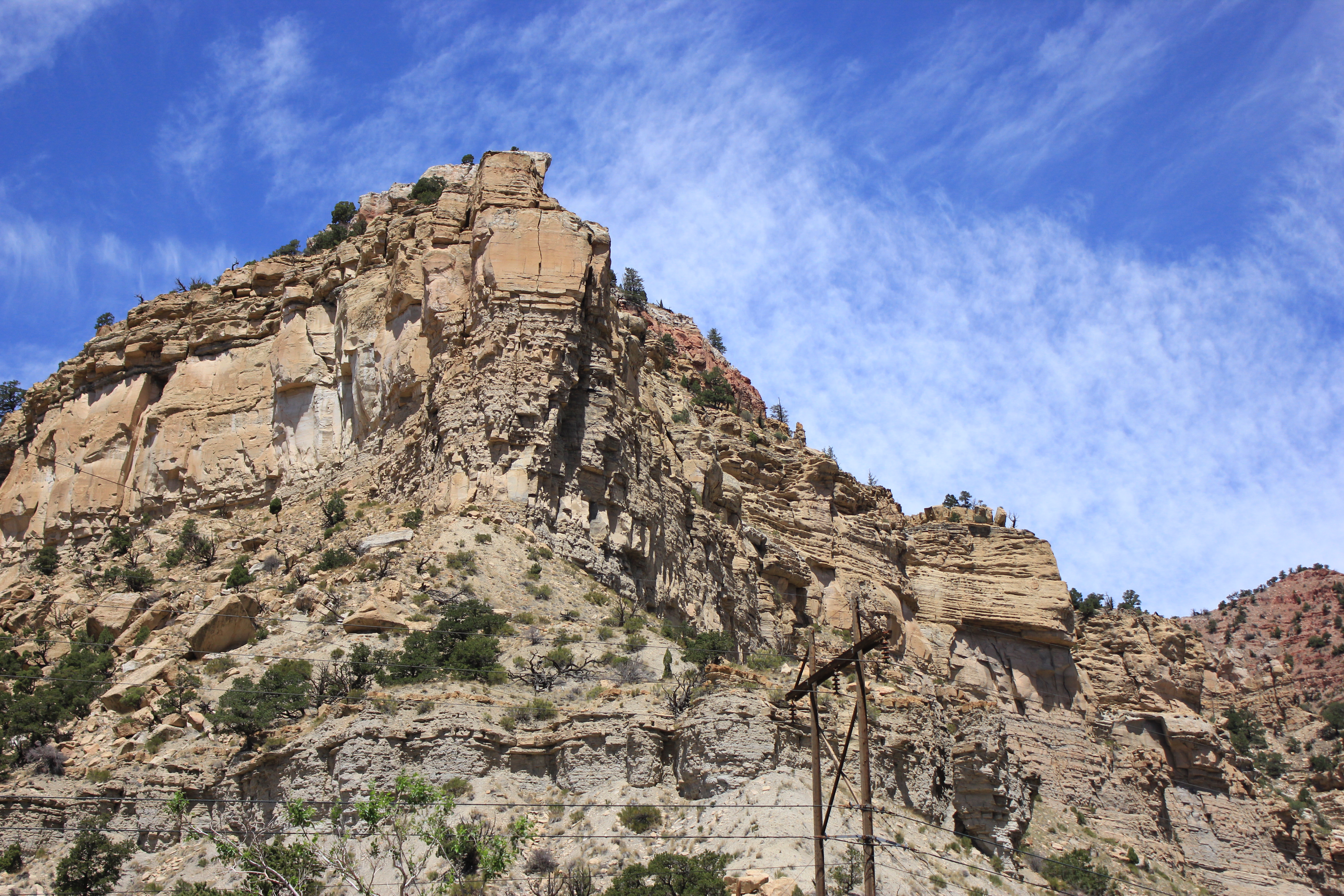 This principle states that a sequence of rocks in their original orientation will have the oldest rock on the bottom and the youngest rock on the top. A simple way to think about this is that for something to be on top of something else, for example in order to put a book on top of a table, the table has to be there. If the table isn’t already there and you put the book down, it falls to the floor (and note! The floor had to be there for the book to land on it.). The same is true of rocks. In order to deposit a sandstone on top of a limestone, the limestone has to already be there. Knowing this, geologists can figure out the relative ages of rocks on top of each other.

Similarly to the principle of superposition, a rock must already be in place to be cut by a fault, igneous intrusion or erosion. By carefully examining which rock units are cut by faults or intrusions, or which rock units have been weathered, geologists can further determine the relative ages of rocks.

Image of rocks: three are cut, the rocks on top are not

Walther’s law is a little different from the previously discussed geologic principles, but it is just
as important. Instead of dealing only with relative time, Walther’s law deals with relative space through time. Walther’s law states that depositional environments that are laterally adjacent on the surface of the earth will also appear in succession in a stratigraphic sequence. If there is something missing, there is missing time, or an unconformity. 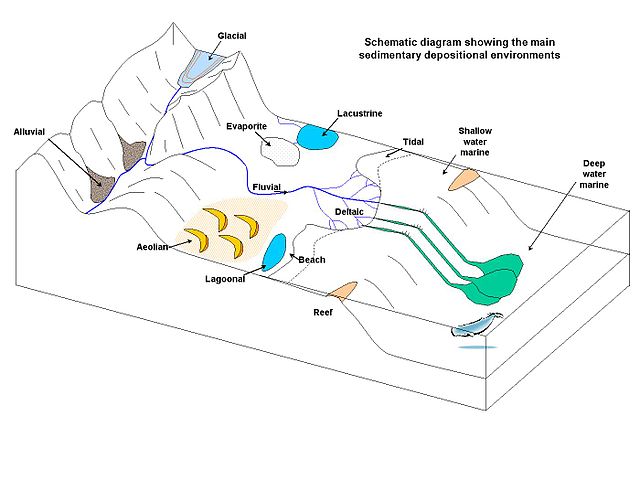 Changes in depositional environments are driven by changes in base level, or the elevation of the terminal body of water (often, but not always sea level!).  When base level changes, the depositional environments shift to achieve a new equilibrium. If sea level falls, you might shift the depositional environment image to the right. However, you can’t move the mountains, so you end up stretching out the environments in between the mountains and the ocean. Where you once had a delta, now you might have a meandering river. If, instead, you raise seal level, you would move the ocean to the left, squishing the environments in between. The result could be a delta where you once had a meandering river. Think of the beach as the main focus: If the beach moves towards where the ocean used to be, sea level has fallen and your sediments prograde. If the beach moves away from where the ocean used to be, sea level has risen and your sediments regress.

Now imagine that you have a section of rock. Here’s what a geologist would see of the five examples above. The direction of depositional environment change moving up-sequence (oldest to youngest) tells you about the change in the environment, which in turn tells you about the change in base level. Using the image to show adjacent depositional environments, do you think base level rises or falls in this sequence of rocks?

Image - three examples of depositional environments with tie points to show spacial correlations. One high base level, one medium base level, and one low base level, with arrows between them to show which way base level is moving

The information a geologist can get about depositional environments and the rise and fall of sea level through time lets her know where the oil-bearing sedimentary rocks might be!

‹ The Rock Cycle up Sedimentary Rocks ›