The concept map below describes the rock cycle. As you can see, each of the rock types is related to the others through different physical and chemical processes. How does this translate to the world outside? Mountains can expose igneous, sedimentary, and metamorphic rocks to weathering and erosion. Grains of sediment (or boulders!) break off of these exposed rocks, and, thanks to gravity, move downhill either in a stream bed or by rolling. This travel causes further breakdown of the sediment, which eventually reaches the ocean. The sediment, once deposited in an ocean basin, gets buried by other sediment, and compacted into a sedimentary rock. If it’s buried deep enough, or if the basin becomes part of an orogen, it can be metamorphosed,becoming a metamorphic rock. Eventually, the rock can either become exposed through sea level fall or mountain-building, where it starts the journey back to the ocean again, or it can be recycled back into the mantle at a subduction zone, perhaps one day returning to the surface as an igneous rock. The following concept map shows the rock cycle in terms of earth processes. New material comes from mid-ocean ridges and volcanoes; it is weathered, deformed, compacted and cemented, until it is recycled back into the mantle at a subduction zone. 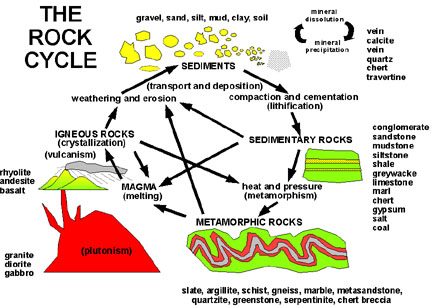 At this point you may be thinking to yourself ‘how does a sedimentary rock, formed in an ocean, get to be in a mountain range? And if rocks are constantly being weathered, extruded, or squashed, shouldn’t the earth be changing constantly?’ And you’d be right! The earth is made up of distinct tectonic plates. Where they move towards each other either mountain belts or subduction zones form. Where they move away from each other mid-ocean ridges form. These plates move individually and very, very slowly. Sometimes these movements are slow and steady. Other times, the plate gets stuck, and that slow and steady motion builds up over hundreds of years, releasing all at once in a devastating earthquake, like the 2011 Tohoku Oki earthquake in Japan. Events like earthquakes and volcanic eruptions - obvious changes to the earth’s surface - can happen over a matter of minutes or hours, but the recurrence interval of these events can be hundreds to thousands of years.

Take a couple of minutes to watch the video below to learn how plate tectonics, volcanoes and earthquake are related.

Did you notice that a majority of earthquakes and volcanic events occur at plate boundaries?

Take a look at the mountain ranges of the world. Most of them (though not all) are along active plate boundaries. Some old mountains, like the Appalachian Mountains of the eastern United States, show where plate boundaries used to be, but are no longer. As the plates move, where they interact with each other they build up stress and strain. Stress is the push, pull, or shear felt by a material when subjected to a force (in this case, another tectonic plate). Strain is the change in shape due to a stress. When enough force builds up, the friction keeping the two plates in place is overcome and the strain energy is released, often all at once. This is an earthquake!

As a result of the sudden release of energy, large waves move through the earth: P-waves, or primary waves; S-waves, or secondary waves, and surface waves. P-waves are compression waves. These waves arrive at detectors first, and can move through the entirety of the earth to be recorded by seismic detectors on the far side. S-waves arrive second (as you may have guessed). S-waves are transverse waves and cannot pass through liquid. Careful observations of seismic waves at the far sides of earthquakes are how we know the outer core of the earth is liquid! Surface waves are the slowest of the three, do not penetrate below the crust of the earth, and cause motion at the surface, bringing down buildings and causing damage.

Check out this animation of plate motion over the last 50 million years. As you watch, think about the mountains that must have been built and eroded over time. And let yourself be amazed! 50 million years ago, things were very different!

‹ Rocks up The Principles of Geology ›