Why is Glass Transparent?

In practice, impurities (such as sodium shown in the figure below) are added to the glass to lower the melting temperature and the viscosity of the glass to make it easier to work the glass at lower temperatures. 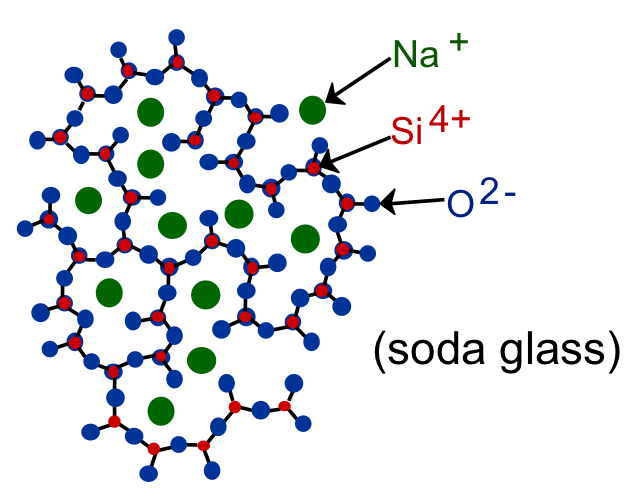 Glass's amorphous structure breaks up the band structure of SiO2 such that there are no electronic states that electrons can jump to by absorbing visible light in glass. Here is a TED-Ed video by Mark Miodownik (the host of the Secret Life of Materials videos) to explain this in more detail. In the next sections, we are going to discuss why glass is brittle and how glass is being engineered not to be so brittle.

Take a look out your window, put on your glasses if you wear them. You might want to grab a pair of binoculars, too, or a magnifying lens.

Now, what do you see?

Well, whatever it is, it's not the multiple layers of glass right in front of you. But have you ever wondered how something so solid can be so invisible? To understand that, we have to understand what glass actually is, and where it comes from.

It all begins in the Earth's crust, where the two most common elements are silicon and oxygen. These react together to form silicon dioxide, whose molecules arrange themselves into a regular crystalline form known as quartz. Quartz is commonly found in sand, where it often makes up most of the grains and is the main ingredient in most type of glass. Of course, you probably noticed that glass isn't made of multiple tiny bits of quartz, and for good reason. For one thing, the edges of the rigidly formed grains and smaller defects within the crystal structure reflect and disperse light that hits them. But when the quartz is heated high enough the extra energy makes the molecules vibrate until they break the bonds holding them together and become a flowing liquid, the same way that ice melts into water.

Unlike water, though, liquid silicon dioxide does not reform into a crystal solid when it cools. Instead, as the molecules lose energy, they are less and less able to move into an ordered position, and the result is what is called an amorphous solid. A solid material with the chaotic structure of a liquid, which allows the molecules to freely fill in any gaps. This makes the surface of glass uniform on a microscopic level, allowing light to strike it without being scattered in different directions.

But this still doesn't explain why light is able to pass through glass rather than being absorbed as with most solids. For that, we need to go all the way down to the subatomic level. You may know that an atom consists of a nucleus with electrons orbiting around it, but you may be surprised to know that it's mostly empty space. In fact, if an atom were the size of a sports stadium, the nucleus would be like a single pea in the center, while the electrons would be like grains of sand in the outer seats. That should leave plenty of space for light to pass through without hitting any of these particles. So the real question is not why is glass transparent, but why aren't all materials transparent?

The answer has to do with the different energy levels that electrons in an atom can have. Think of these as different rows of seats in the stadium stands. An electron is initially assigned to sit in a certain row, but it could jump to a better row, if it only had the energy. As luck would have it, absorbing one of those light photons passing through the atom can provide just the energy the electron needs. But there's a catch. The energy from the photon has to be the right amount to get an electron to the next row. Otherwise, it will just let the photon pass by, and it just so happens that in glass, the rows are so far apart that a photon of visible light can't provide enough energy for an electron to jump between them. Photons from ultraviolet light, on the other hand, give just the right amount of energy, and are absorbed, which is why you can't get a suntan through glass. This amazing property of being both solid and transparent has given glass many uses throughout the centuries. From windows that let in light while keeping out the elements, to lenses that allow us to see both the vast worlds beyond our planet, and the tiny ones right around us. It is hard to imagine modern civilization without glass. And yet for such an important material we rarely think about glass and its impact. It is precisely because the most important and useful quality of glass is being featureless and invisible that we often forget that it's even there.