What is a Polymer?

In this lesson, we will introduce the structure, history of development, and properties of polymers. The roots of the word polymer are actually very descriptive of a polymer. The root ‘mer’ means unit, and poly means many. Taken together, the word polymer can be deconstructed as many units. Typically, ‘mer’ is referred to as a monomer. ‘Mono’, which is the root for one, literally translates as one 'mer'. A commonly used definition of polymer is a material that is composed of many monomers (from 10s to 1000s) all linked together to form chains. A monomer can be composed of one to many atoms which form the base unit which is repeated to form a polymer, as represented in the figure below. 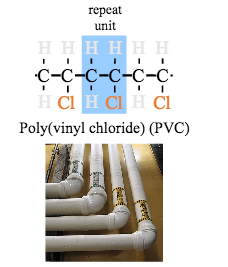 We will also study how chains of polymers are constructed. Polymers can resemble spaghetti noodles (linear), ladders (cross-linked), long chains with smaller chains hanging off the main chain (backbone) known as branched polymers, elaborately complex structures (network), or a mixture of some or all of these basic types. Other polymers, known as copolymers, are constructed from two distinctly different starting monomers and are classified as random, alternating, block, or graft polymers.

Now, watch this TED-Ed video titled, “From DNA to Silly Putty, the Diverse World of Polymers” (4:59), before proceeding on to the next section of our lesson.

What do silk, DNA, wood, balloons, and Silly Putty all have in common? They're polymers.

Polymers are such a big part of our lives that it's virtually impossible to imagine a world without them, but what the heck are they? Polymers are large molecules made of small units called monomers linked together like the railroad cars from a train. Poly means many, and mono means one, and mers or mero means parts. Many polymers are made by repeating the same small monomer over and over again while others are made from two monomers linked in a pattern.

All living things are made of polymers. Some of the organic molecules in organisms are small and simple, having only one of a few functional groups. Others, especially those that play structural roles or store genetic information, are macromolecules. In many cases, these macromolecules are polymers. For example, complex carbohydrates are polymers of simple sugars, proteins are polymers of amino acids, and nucleic acids, DNA and RNA, which contain our genetic information, are polymers of nucleotides. Trees and plants are made of the polymer cellulose. It's the tough stuff you find in bark and stems. Feathers, fur, hair, and fingernails are made up of the protein keratin, also a polymer. It doesn't stop there. Did you know that the exoskeletons of the largest phylum in the animal kingdom, the arthropods, are made of the polymer chitin?

Polymers also form the basis for synthetic fibers, rubbers, and plastics. All synthetic polymers are derived from petroleum oil and manufactured through chemical reactions. The two most common types of reactions used to make polymers are addition reactions and condensation reactions. In addition reactions, monomers simply add together to form the polymer. The process starts with a free radical, a species with an unpaired electron. The free radical attacks and breaks the bonds to form new bonds. This process repeats over and over to create a long-chained polymer. In condensation reactions, a small molecule, such as water, is produced with each chain-extending reaction.

The first synthetic polymers were created by accident as by-products of various chemical reactions. Thinking they were useless, chemists mostly discarded them. Finally, one named Leo Baekeland decided maybe his useless by-product wasn't so useless after all. His work resulted in a plastic that could be permanently squished into a shape using pressure and high temperatures. Since the name of this plastic, polyoxybenzylmethylenglycolanhydride, wasn't very catchy, advertisers called it Bakelite. Bakelite was made into telephones, children's toys, and insulators for electrical devices. With its development in 1907, the plastics industry exploded.

One other familiar polymer, Silly Putty, was also invented by accident. During World War II, the United States was in desperate need of synthetic rubber to support the military. A team of chemists at General Electric attempted to create one but ended up with a gooey, soft putty. It wasn't a good rubber substitute, but it did have one strange quality: it appeared to be extremely bouncy. Silly Putty was born!

Synthetic polymers have changed the world. Think about it. Could you imagine getting through a single day without using plastic? But polymers aren't all good. Styrofoam, for example, is made mainly of styrene, which has been identified as a possible carcinogen by the Environmental Protection Agency. As Styrofoam products are being made, or as they slowly deteriorate in landfills or the ocean, they can release toxic styrene into the environment. In addition, plastics that are created by addition polymerization reactions, like Styrofoam, plastic bags, and PVC, are built to be durable and food-safe, but that means that they don't break down in the environment. Millions of tons of plastics are dumped into landfills every year. This plastic doesn't biodegrade, it just breaks down into smaller and smaller pieces, affecting marine life and eventually making their way back to humans.

Polymers can be soft or hard, squishy or solid, fragile or strong. The huge variation between means they can form an incredibly diverse array of substances, from DNA to nylon stockings. Polymers are so useful that we've grown to depend on them every day. But some are littering our oceans, cities, and waterways with effects on our health that we're only beginning to understand.