Have you ever seen the movie, The Wizard of Oz? Are you familiar with the scene in The Wizard of Oz when Dorothy, the Scarecrow, and the Tin Man fearfully chant "Lions and tigers and bears, oh my!" as they walk along the yellow brick road through the forest? When I wrote the title to this section, I couldn't help but think of that scene. This section is about squall lines, bow echoes, and derechos (oh my!), and it begins our focus on the types of thunderstorms that are the most prolific severe weather producers. These thunderstorms warrant some extra attention because they tend to cause the most widespread, damaging severe weather outbreaks. Squall lines, derechos, and bow echoes actually aren't three separate types of thunderstorms, but they all indicate an increased risk of damaging straight-line winds, so like Dorothy, the Scarecrow, and the Tin Man, let's forge ahead (chanting "squall lines and bow echoes and derechos, oh my!" is optional).

By definition, squall lines are clusters of thunderstorms that have a prominent, relatively linear signature on images of radar reflectivity. While squall lines can produce any kind of severe weather, they most prominently produce damaging straight-line winds. The convection in a squall line tends to be relatively narrow, while the characteristic length can range from approximately 50 miles to hundreds of miles. Squall Lines can be solid (thunderstorms "touch" each other), as the image of radar reflectivity at 23Z on March 9, 2006, attests (below). Note that the squall line is solid from central Tennessee, to northwest Alabama and into Mississippi. Squall lines can also be broken (cell-sized gaps between thunderstorms). Check out this visible satellite image of a squall line over the Middle West at 22Z on August 28, 2007, and note the spacing between storms from western Wisconsin across southeast Minnesota to northern Iowa.

Squall lines form and thrive (they can last for several hours or even longer, on occasion) in environments with strong vertical wind shear, especially in the lower troposphere. Strong vertical wind shear tends to go with stronger low-level winds blowing relative to the squall line's gust front, which keeps it restrained and prevents the cold pool from racing out far ahead of the line of thunderstorms. If the cold pool is unrestrained and races out ahead of the squall line, thunderstorms tend to be short lived because squall line's updrafts lose access to warm, moist, buoyant air parcels (not unlike the dying updraft of a single cell thunderstorm).

Squall lines also typically have an area of stratiform rain that trails the main line of thunderstorms (called the "trailing stratiform" region), although depending on how the upper-level winds are blowing, the area of stratiform rain occasionally is ahead of the squall line or even parallel to it, so there's more than one flavor of squall line! Many squall lines are also preceded by a shelf cloud, which is a low-level, horizontal wedge-shaped cloud along a gust front. The shelf cloud marks rising air along the leading edge of the gust front, and the approach of a shelf cloud can look quite ominous (as in this shelf-cloud photo from the NOAA library), suggesting that the approaching gust front may pack a punch!

To see a raging squall line blossom, check out this radar loop from 22Z on January 29, 2008 to 02Z on January 30. By the end of the loop, you'll see a long, continuous squall line stretching from western Ohio to Tennessee. This squall line formed in conjunction with strong low-level convergence along a cold front (18Z surface analysis), and caused hundreds of reports of damaging winds (each marked by a blue dot on the map of SPC storm reports for January 29, 2008). You may have also noticed that the squall line wasn't a perfectly straight line on radar. It had sections that bulged forward. That's a classic radar signature that damaging straight-line winds are likely occurring.

A bow echo is crescent-shaped radar echo that sometimes appears along the otherwise linear reflectivity pattern associated with a squall line, which is frequently associated with damaging straight-line winds and occasionally, brief tornadoes. As you learn about bow echoes, keep in mind that they are strictly features observed on radar. In other words, a bow echo itself is not a type of storm or a storm hazard. Rather, it's the radar footprint that signals that a storm hazard (damaging straight-line wind along a squall line) is likely occurring.

The details of how bow echoes form are beyond the scope of this course, but the bottom line is that sometimes pressure gradients aloft in the vicinity of the squall line cause a stream of air to rush into the back edge of the squall line (called a "rear-inflow jet") and descend toward the surface, sometimes reaching all the way to the ground. When a rear-inflow jet descends to the surface (essentially a downburst), the stage is set for a portion of the squall line to bulge forward in response to the surge in low-level winds. On radar reflectivity, a bow echo appears in this region. Such echoes got their name because of their resemblance to an archery bow, which you can see on the radar mosaic from 1150Z on May 2, 2008 (below). 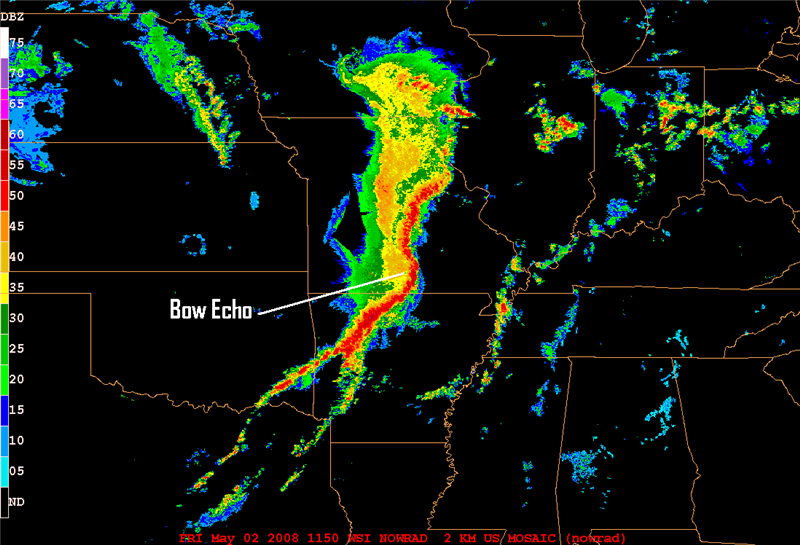 Bow echoes got their name from their resemblance to an archery bow. The 1150Z radar mosaic from May 2, 2008 shows a prominent bow echo along a squall line.
Credit: WSI Corporation

Of course, images of radar reflectivity don't have to display bow echoes in order for there to be wind damage, but when squall lines with bow echoes become long-lived, the stage is set for damaging winds over an expansive path. Meteorologists give such long-lived wind storms a special name.

Formally, a derecho (pronounced "de-RAY-cho") is a widespread, convectively-induced straight-line wind storm composed of numerous downbursts produced by a group of thunderstorms. Derecho is actually a Spanish word that, in this context, translates to "straight-ahead" or "direct." There's some disagreement in the meteorological community on what exact criteria should define a derecho, but we'll use these as our criteria:

In the interest of full disclosure, some meteorologists don't believe that reports of wind gusts of at least 65 knots should be included in the criteria (it's a hard criteria to meet), but I'll include it in the definition because it reserves the term "derecho" for truly remarkable, long-lived wind storms. Derechos are most common from May through July in the United States, and most areas of the eastern U.S. (east of the Rockies) experience a derecho at least once every few years, on average. Derechos are most common in a swath from the southern Plains to the southern Great Lakes region.

Some derechos are basically long-lasting, ferocious squall lines that display multiple bow echoes on radar imagery. They often form along or ahead of a cold front (perhaps in a trough of low pressure ahead of the front), and are called "serial derechos." But, there's another kind of derecho that's more common during the warm season. It forms a bit differently, in that it typically starts as a cluster of thunderstorms to the north of a warm or stationary front, and is called a "progressive derecho." Over time, progressive derechos develop multiple bow echoes and end up resembling squall lines as they mature.

A prime example of a progressive derecho occurred on June 29, 2012, which started as a cluster of thunderstorms over northwest Illinois and east-central Indiana. This radar loop of the June 29, 2012 derecho is a "must watch," as it documents the storms from their initiation around Chicago through their race off the East Coast. Along the way, this derecho carved a path of destruction, as evidenced by the map of storm reports below. 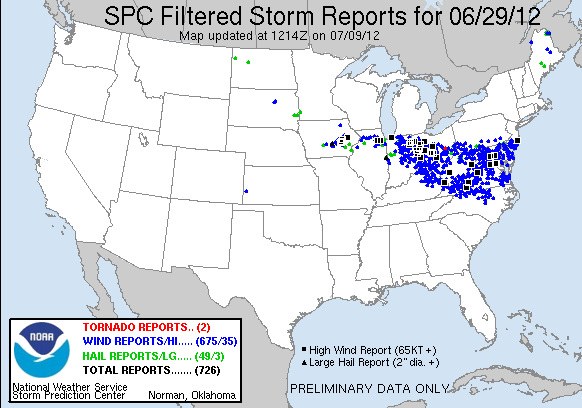 The storm reports for June 29, 2012, indicate a long swath of damaging winds associated with a derecho that was initiated over the Upper Mississippi Valley and ended just off the Middle Atlantic Coast. The black squares represent reports of wind gusts of 65 knots or more.
Credit: Storm Prediction Center

More than 600 severe wind reports with this derecho took their toll, and all in all, more than 4.2 million customers lost power during the storm (roughly 250,000 customers still did not have power a full week later). The following week was very hot in some of the hardest hit areas of Indiana, Ohio, and West Virginia, and the combination of sweltering heat and no electricity for air conditioning (or refrigeration for food) caused this storm to take on legendary status for those affected. So, while any squall line brings an increased risk of wind damage, the extent of wind damage from derechos is in a league of its own. But, straight-line winds aren't the only wind-related threat associated with thunderstorms. Up next, we'll shift our focus to tornadoes -- the wind-related threat that takes all the headlines. Read on.