When it comes to defining climate, it is often said that "climate is what you expect; weather is what you get". That is to say, climate is the statistically-averaged behavior of the weather. In reality, it is a bit more complicated than that, as climate involves not just the atmosphere, but the behavior of the entire climate system—the complex system defined by the coupling of the atmosphere, oceans, ice sheets, and biosphere.

Having defined climate, we can begin to define what climate change means. While the notion of climate is based on some sort of statistical average of behavior of the atmosphere, oceans, etc., this average behavior can change over time. That is to say, what you "expect" of the weather is not always the same. For example, during El Niño years, we expect it to be wetter in the winter in California and snowier in the southeastern U.S., and we expect fewer tropical storms to form in the Atlantic during the hurricane season. So, climate itself varies over time.

If climate is always changing, then is climate change by definition always occurring? Yes and No. A hundred million years ago, during the early part of the Cretaceous period, dinosaurs roamed a world that was almost certainly warmer than today. The geological evidence suggests, for example, that there was no ice even at the North and South poles. So global warming can happen naturally, right? Certainly, but why was the Earth warmer at that time?

A hint of why can be found in many of the careful renditions of what the Earth may have looked like during the age of dinosaurs. Some of the most insightful interpretations came from the 19th century Yale paleontologist, Othniel Charles Marsh. Let us look at one of his renderings: 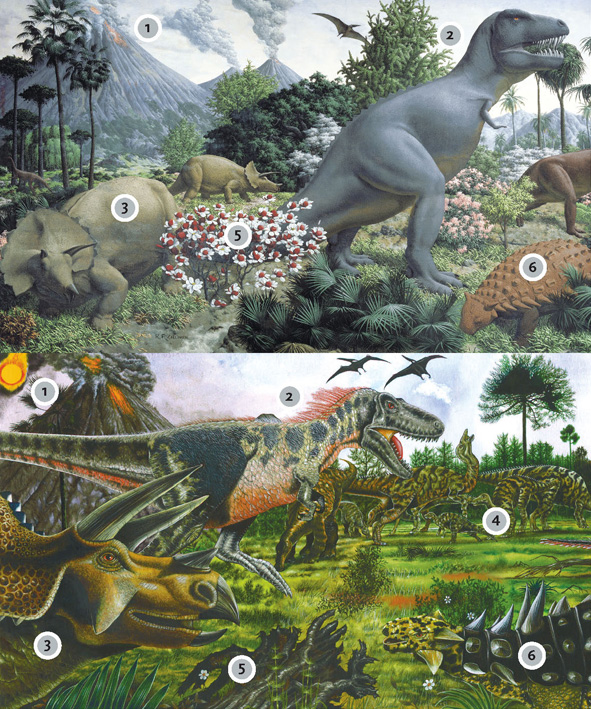 One section of the Age of Reptiles mural in the Peabody Museum
Credit: Yale Alumni Magazine

What features of the above mural might provide a clue for why the early Cretaceous was so warm?

Click for answer.
If you said something about the volcanic eruptions in the background, then you're on the right track.

As we will see later in this lecture, volcanic eruptions have had a cooling impact on climate on a historical time frame, by injecting reflecting aerosols into the atmosphere, which block out some amount of incoming sunlight for several years after the eruption. However, over millions of years, volcanic eruptions have a different, and indeed quite profound, influence on the atmospheric composition. They pump carbon dioxide into the atmosphere. More carbon dioxide means a stronger greenhouse effect. We will talk about this later in the lecture.

‹ Introduction up Importance: Why Should We Care About Climate Change? ›
METEO 469: From Meteorology to Mitigation: Understanding Global Warming