Importance: Why Should We Care About Climate Change? 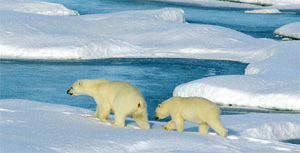 As we have discussed, climate change can be natural. If climate changes naturally, then why should we be concerned about the climate change taking place today? After all, the early Cretaceous period discussed previously was warmer than today, but life thrived even in regions, such as the interior of Antarctica, that are uninhabitable today.

One misconception is that the threat of climate change has to do with the absolute warmth of the Earth. That is not, in fact, the case. It is, instead, the rate of change that has scientists concerned. Living things, including humans, can easily adapt to substantial changes in climate as long as the changes take place slowly, over many thousands of years or longer. However, adapting to changes that are taking place on timescales of decades is far more challenging.

Here is a useful "thought experiment" to illustrate what sort of discussion might be happening now if, instead of the current climate, we were living under the climate conditions of the last Ice Age, and human fossil fuel emissions were pushing us out of the ice age and into conditions resembling the pre-industrial period, rather than the actual case, where we are pushing the Earth out of the pre-industrial period and into a period with conditions more like the Cretaceous. Take a look at Figure 1.2 below, which indicates the Gulf coast continental outline near the height of the last Ice Age 18,000 years ago, vs. the current continental outline.

Everything in the the lighter shading would be flooded in the transition from the ice age to pre-industrial modern climate. But what sort of effort would that have taken?

It turns out that the natural increase in atmospheric CO2 that led to the thaw after the last Ice Age was an increase from 180 parts per million (ppm) to about 280 ppm. This was a smaller increase than the present-time increase due to human activities, such as fossil fuel burning, which thus far have raised CO2 levels from the pre-industrial value of 280 ppm to a current level of over 400 ppm--a level which is increasing by 2 ppm every year. So, arguably, if the dawn of industrialization had occurred 18,000 years ago, we may very likely have sent the climate from an ice age into the modern pre-industrial state.

How long it would have taken to melt all of the ice is not precisely known, but it is conceivable it could have happened over a period as short as two centuries. The area ultimately flooded would be considerably larger than that currently projected to flood due to the human-caused elevation of CO2 that has taken place so far. The hypothetical city of "Old Orleans" would have to be relocated from its position in the Gulf of Mexico 100+ miles off the coast of New Orleans, to the current location of "New Orleans".

By some measures, human interference with the climate back then, had it been possible, would have been even more disruptive than the current interference with our climate. Yet that interference would simply be raising global mean temperatures from those of the last Ice Age to those that prevailed in modern times prior to industrialization. What this thought experiment tells us is that the issue is not whether some particular climate is objectively "optimal". The issue is that human civilization, natural ecosystems, and our environment are heavily adapted to a particular climate — in our case, the current climate. Rapid departures from that climate would likely exceed the adaptive capacity that we and other living things possess, and cause significant consequent disruption in our world.

In the remainder of this lesson, we are going to try to begin to get a handle on the fundamental science underlying climate change and global warming.

‹ What is Climate? up Overview of the Climate System - Part 1 ›
METEO 469: From Meteorology to Mitigation: Understanding Global Warming