Critics often argue that climate scientists are alarmist and overstate projections of future climate change (if you have any doubt about this, just do a Google news search on e.g., "warming" and "alarmist" and see what turns up—warning: the Internet is a wild frontier of information, misinformation, and outright disinformation—you should always question the objectivity and qualifications of any apparent news sources).

Ironically, in many cases, the climate science community has been overly cautious and conservative in their projections, perhaps, in part, out of fear of being labeled as alarmist by its detractors. One case in point is the decline in Arctic summer sea ice extent. The decline in minimum summer Arctic sea ice has outpaced even the most dramatic of the IPCC projections in recent decades. One possibility is that there is missing physics involved—related, for example, to the mechanics of ice fracturing and deformation, that is causing the models to underpredict the fragility of sea ice and the possible feedbacks involved.

Following the dramatic decline of summer 2007 (the minimum value in the red curve below), there was even fear that we had crossed a previously unknown tipping point from which Arctic sea ice would not be able to recover (we will have far more to say about possible climate tipping points later in this lesson). If so, that would have dire implications for, e.g., animal species such as the polar bear, which require sea ice environment for their existence. Recent scientific work suggests that there is no such tipping point, however, and that the environment of the polar bear can be preserved given ongoing efforts aimed at mitigating future climate change. Those efforts would not be easy, however; the study finds that future warming would have to be kept below 1.25°C, which corresponds to roughly 2°C warming relative to pre-industrial time. As we have seen before, such a target would likely require stabilizing concentrations at 450 ppm or lower.

One problem that declining sea ice does not contribute to (at least, not to any practical extent) is the problem of global sea level rise. The melting of land ice, nonetheless, will contribute to sea level rise. As we saw in a previous lesson, mountain glaciers and ice caps around the word have undergone substantial retreat over the past century. They are projected to contribute a fraction of a meter of sea level rise over the next century (for example, see this news article about a study published in the journal Nature Geoscience).

The melting of the major continental ice sheets will also contribute to future sea level rise. This is part of the reason that so much attention is paid to the stability of the two major ice sheets: the Antarctic and Greenland ice sheets. In a previous lesson, we already saw that the two ice sheets appear to have entered into a regime of negative mass balance, i.e., they are now losing ice. Let us take a look at the best available projections for what is likely to happen to these ice sheets under a global warming scenario.

Shown below is a simulation of the process of Antarctic sea ice retreat in response to global warming. The simulation was done by one of the leading ice sheet modelers, Penn State's own David Pollard. As we see here, it is primarily the low elevation West Antarctic half of the Ice Sheet that is prone to melting, and the process of collapse, at least in this simulation, is potentially quite slow, occurring on the millennial timescale.

The West Antarctic ice sheet has collapsed and re-grown many times in the last few million years, and it might collapse again in the next few thousand years due to greenhouse gas warming. This model shows a typical collapse and re-growth event. The grounding line, the critical boundary between floating and grounded ice, is shown by a thin red line. The relative model time does not represent a specific time in history. However, the generally stable period shown in the first 3000 years is roughly analogous to the past 3000 years of Earth's history. 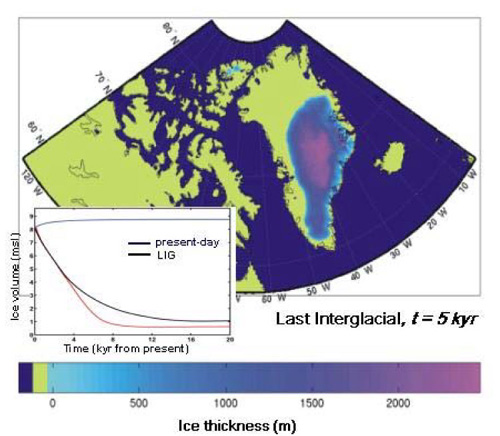 Yet, processes discussed on the Sea Ice page of Lesson 3 could lead to ice sheet collapse on timescales much faster than suggested by these model simulations. The formation of fissures known as moulins allow meltwater to penetrate to the bottom of the ice sheet, where it lubricates the base of the ice sheet, allowing ice to be more easily exported through ice streams out into the ocean. The physics responsible for this phenomenon are not well represented in current ice sheet models. 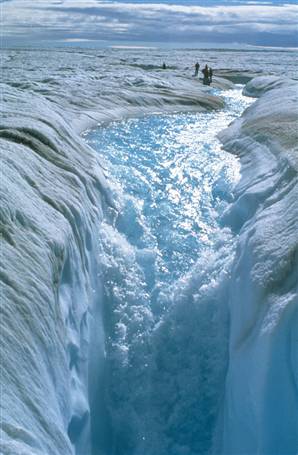 Another effect that is not well represented by the models is the buttressing effect provided by ice shelves. Ice shelves provide support to the interior ice sheet through an effect not unlike that of the flying buttress employed so widely in medieval architecture. As the ice shelves themselves disintegrate, there is the potential for destabilization of the inland ice, which is then free to break up and calve into the ocean. This effect was well documented during the disintegration of the Larsen B ice shelf of the Antarctic Peninsula in January-March (austral summer) 2002. The ice shelf, roughly the size of the state of the Rhode Island, disintegrated in little over a month. In the months following the breakup of the ice shelf, an acceleration in the streaming of inland ice to the ocean was observed, suggesting the possibility that such dynamical processes could accelerate the collapse of the West Antarctic ice sheet—the part of the Antarctic Ice Sheet most susceptible to break-up as a rule of anthropogenic warming. An even more recent, though less dramatic, example is discussed here. Once again, the observation of such processes in nature, and the fact that the ice sheets already appear to be losing ice mass, suggests that the breakup of continental ice shelves could proceed considerably faster than is suggested by current generation ice sheet models.

Regardless of the precise timescale of decay of the continental ice sheets, the Greenland ice sheet continues to decay much more rapidly than the models project by reaching a critical level of greenhouse gases in the atmosphere whereby we commit to the initial warming necessary to set in motion the sequence of positive feedbacks leading to the ultimate destruction of the ice sheet. Once again, we encounter the notion of a tipping point—a notion to be explored later in this lesson.