There are several components involved in projecting future sea level. One—the thermal expansion of the oceans, is fairly straightforward, and the only real uncertainty involved with that component is the warming itself, and the rate at which it is mixed down beneath the ocean surface. This contribution is projected to be modest, amounting to only a fraction of a meter over the next century. The 2nd component is the contribution from melting mountain glaciers and ice caps. This contribution, too, is likely to be modest, only a small fraction of a meter within the next century. The 3rd contribution—that from the melting of the two major ice sheets—is both the largest and the most uncertain.

As alluded to earlier, even modest additional warming could set in motion the collapse of all or most of the Greenland Ice Sheet (which would add 5-7 meters of sea level rise) and the west Antarctic Ice Sheet (which would add roughly another 5 meters). In our discussion of the projected changes in the Greenland and Antarctic Ice Sheet in the previous section, we saw that there are significant uncertainties regarding the timescale of this disintegration, however. Current ice sheet models suggest that the collapse of the ice sheets may take many centuries. Yet we know there are reasons to be skeptical about current ice sheet models. They are missing some physics that appears to be important in the real world—i.e., the physics responsible for the formation of moulins, and the possible lost of buttressing support by decaying ice shelves—that could allow for much faster disintegration. Indeed, the very same ice sheet models that predict a slow, multi-century breakup of the ice sheets did not predict that ice sheet loss would be observed for many decades, and yet, as we have seen that this loss already appears to be underway.

The uncertainties in projecting the ice sheet melt obviously complicate projections of future sea level rise, since this is potentially the largest contributor to global sea level rise. In the IPCC AR4 report from 2007, the IPCC simply neglected this contribution because they considered it too uncertain to estimate. This means that that their formal projections were almost certainly an absolute lowest estimate. (However, the IPCC AR5 report does include an estimate of the ice sheet contribution, leading to an increased sea level change projection of about 0.60 m by 2100 under RCP8.5.) Is it possible to provide a more realistic estimate? German climate scientist Stefan Rahmstorf and collaborators have used an alternative, so-called semi-empirical approach to projecting future sea level rise. This approach uses the historical relationship between past changes in sea level rise and global mean temperature to construct a statistical model, and, in principle, incorporates the contribution from melting ice sheets, though obviously with some amount of uncertainty. The semi-empirical projections suggest the possibility of more than a meter (roughly 3 feet) of sea level rise by 2100, and more than 3 meters (roughly 9 feet) of sea level rise by 2200. Another analysis using the Structured Expert Judgment (SEJ) method shows that sea level could rise 2 meters (6 feet) by 2100, with higher projected rises by 2300.  We will look at the likely impacts of such amounts of sea level rise when we focus on climate change impacts later on in the course. 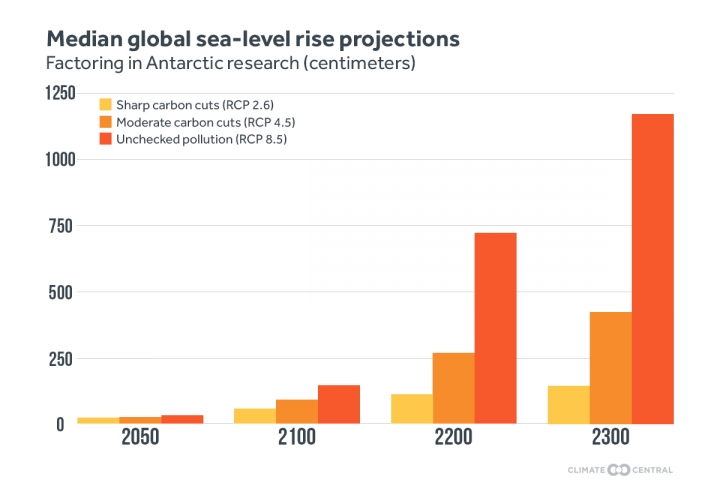