As we saw earlier in the course, the airborne fraction of in the atmosphere has increased by only half as much as it should have given the emissions we have added through fossil fuel burning and deforestation. We know that must be going somewhere. 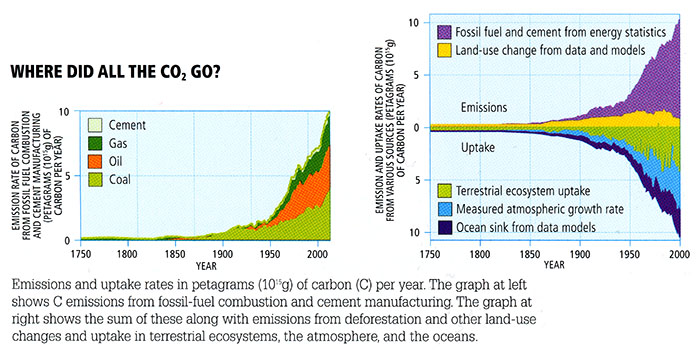 Where Did All The CO2 Go?

Indeed, it is being absorbed by various reservoirs that exist within the global carbon cycle. As we saw earlier, in Lesson 1, only 55% of the emitted carbon has shown up in the atmosphere, while roughly 30-35% appears to be going into the oceans, and 15-20% into the terrestrial biosphere. 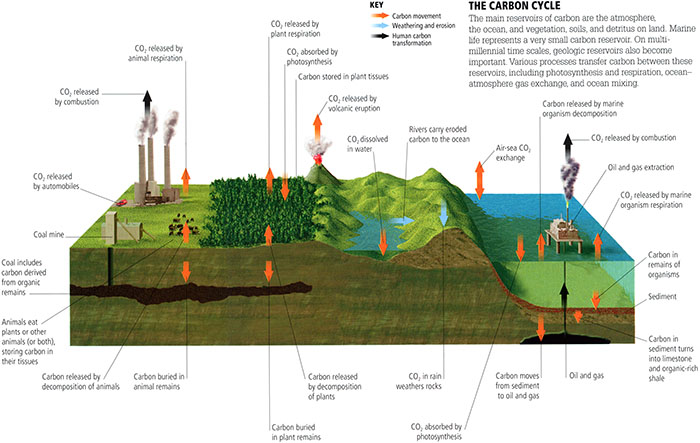 The problem is that this pattern of behavior may not continue. There is no guarantee that the ocean and terrestrial biosphere will continue to be able to absorb this same fraction of carbon emissions as time goes on, and that leads us into a discussion of so-called carbon cycle feedbacks.

If we consider the oceans, for example, there are a number of factors that could lead to decreased uptake of carbon as time goes on. Like a warm can of Coke, which loses its carbonation when you warm it up and remove the top, the ocean's solubility decreases as the ocean warms. When we look at the pattern of carbon uptake in the upper ocean, we see that one of the primary regions of uptake is the North Atlantic. This is, in part, due to the formation of carbon-burying deep water in the region. In a scenario we have explored in Lesson 7, the North Atlantic overturning circulation could weaken in the future (though as we have seen, there is quite a bit of uncertainty regarding the magnitude and time frame of this weakening). If that were to happen, it would eliminate one of the ocean's key carbon-burying mechanisms, and allow to accumulate faster in the atmosphere. On the other hand, the biological productivity of the upwelling zone of the cold tongue region of the eastern and central equatorial Pacific is a net source of carbon to the atmosphere, from the ocean. More El Niño-like conditions in the future could suppress this source of carbon, but more La Niña-like conditions could increase this source, further accelerating the buildup of in the atmosphere. So uncertainties in the future course of oceanic uptake abound, but, on balance, it is likely that this uptake will decrease over time, yielding a positive carbon cycle feedback. 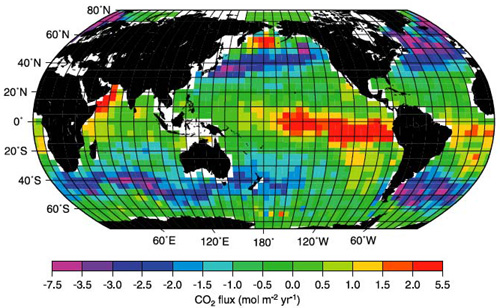 Other ocean carbon cycle feedbacks relate to the phenomenon of ocean acidification, which results from the fact that increasing atmospheric leads to increased dissolved bicarbonate ion in the ocean (a phenomenon will discuss further in our next lesson on climate change impacts). On the one hand, this process interferes with the productivity of calcite-skeleton forming ocean organisms, such as zooplankton, which bury their calcium carbonate skeletons on the sea floor when they die. This so-called oceanic carbon pump, is a key mechanism by which the ocean buries carbon absorbed from the atmosphere on long timescales. So any decrease in the effectiveness of the ocean's carbon pump would represent a positive carbon cycle feedback. On the other hand, since calcifying organisms release into the water as they build their carbonate skeletons, a decrease in calcite production by these organisms will reduce , amounting to a negative carbon cycle feedback.

There are a number of other carbon cycle feedbacks that apply to the terrestrial biosphere. They vary anywhere from a strong negative to a strong positive feedback. Among them are (a) warmer land increasing microbial activity in soils, which releases (a small positive feedback), (b) increased plant productivity due to higher levels (a strong negative feedback). Finally, there is the negative silicate rock weathering feedback which we know to be a very important regulator of atmospheric levels on very long, geological timescales: a warmer climate, with its more vigorous hydrological cycle, leads to increased physical and chemical weathering (the process of taking out of the atmosphere by reacting it with rocks), through the formation of carbonic acid, which dissolves silicate rocks, producing dissolved salts that run off through river systems, eventually reaching the oceans.

Figure 8.11: Estimated magnitudes (including uncertainty ranges) of various potential oceanic and terrestrial carbon cycle feedbacks, expressed in terms of positive or negative estimated change in the airborne fraction of (based on average net increase by 2100 among the various climate models).
Credit: IPCC, 2007

Other potential positive carbon cycle feedbacks that are even more uncertain, but could be quite sizeable in magnitude, are methane feedbacks, related to the possible release of frozen methane currently trapped in thawing Arctic permafrost, and so-called "clathrate"—a crystalline form of methane that is found in abundance along the continental shelves of the oceans, which could be destablized by modest ocean warming. Since methane is a very potent greenhouse gas, such releases of potentially large amounts of methane into the atmosphere could further amplify greenhouse warming and associated climate changes.

The key potential implication of a net positive carbon cycle feedback is that current projections of future warming such as those we have explored previously in Lesson 7, may actually underestimate the degree of warming expected from a particular carbon emissions pathway. This is because the assumed relationship between carbon emissions and concentrations would underestimate the actual resulting concentrations because they assume a fixed airborne fraction of emitted , when, it fact, that fraction would instead be increasing over time. While the magnitude of this effect is uncertain, the best estimates suggest an additional 20-30 ppm of per degree C warming, leading to an additional warming of anywhere from 0.1°C to 1.5°C relative to the nominal temperature projections shown in earlier lessons.