The concept of air capture involves, in essence, "putting the genie back in the bottle". Unlike CCS, which targets emissions from major point sources before they escape into the atmosphere, the CO2 has already made it into the atmosphere in this case, and the objective is to scrub it back out of the ambient atmosphere. One simple way to do this is to grow more trees. Just as deforestation adds CO2 to the atmosphere, reforestation can, in principle, take CO2 out of the atmosphere. Of course, things are not always as easy as they seem. When the trees die, much of the carbon makes it back into the atmosphere as the organic material decomposes, and so the carbon burial process is incomplete and inefficient. There are other problems with this approach. As climate scientist Ken Caldeira of Stanford's Carnegie Institution has pointed out  (e.g., in this op-ed in the New York Times), growing more trees in extratropical seasonally snow-covered regions could have the unintended consequence of actually warming the climate by decreasing the Earth's winter and early spring albedo.

Well, what about artificial trees?  In fact, this idea has been taken quite seriously in recent years. Synthetic "super trees" might be designed in a way that allows them to take up CO2 far more efficiently than actual trees. They would be immortal in the sense that they would not die, decompose, and return carbon to the atmosphere. And they can be constructed to be white and reflective, not only avoiding the tree albedo problem referred to above, but potentially even increasing the Earth's albedo. More efficient than actual trees, networks of these artificial trees deployed around the world could potentially sequester a non-trivial fraction of the carbon emitted by fossil fuel burning.

In the artificial tree scheme, CO2 is captured from the air using a chemical filter, then removed from the filter for permanent burial. Calcium oxide (also known as "Quick lime"), for example, will absorb CO2 from a mixture of air and steam at high temperatures (400°C or so) to form calcium carbonate, and will then release the CO2 at even higher temperatures (1000°C or so), making it a convenient means for both capturing the CO2 and then releasing for compression and burial. The heating, of course, requires an input of energy, but that can be provided by concentrated solar heating so that no input of fossil fuel-generated energy is necessary.

A potentially more efficient scheme has been introduced by Klaus Lackner of Columbia University. In Lackner's scheme, the "artificial tree" towers are designed to capture CO2 through the use of chemical reactions based on ion exchange resin, where the capture and release of  CO2 can be accomplished by varying humidity rather than temperature, which greatly reduces the required input of energy. 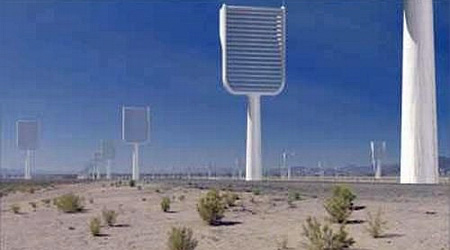 These schemes might seem rather fanciful and far-fetched, but, in fact, they are quite implementable. Using a relatively rudimentary carbon capture tower back in 2008 as a proof of concept, geoengineering researcher David Keith at the University of Calgary demonstrated that half of the CO2 could be removed from the air entering the tower. The issue is not the feasibility of the technology, but rather the cost-effectiveness of the technology. After all, the approach will not be viable as long as cheaper approaches are available. This problem becomes particularly clear when one compares with, e.g., conventional CCS as discussed in the previous section, which takes advantage of the far greater efficiency of capturing carbon from concentrated streams of CO2 compared with more diffuse ambient levels in the atmosphere.

However, if the cost of emitting carbon becomes large enough, or put differently if the value of capturing carbon from the atmosphere becomes great enough, then this technology may indeed become cost-effective. For example, in the event that the climate change is perceived as nearing a dangerous threshold and the importance of imminent stabilization of CO2 levels grows ever greater, air capture offers the only means of achieving relatively rapid stabilization of CO2 levels. Indeed, air capture is the only means by which we might actively lower atmospheric CO2 levels if we conclude that even current levels (i.e,. roughly 400 ppm) are too high. NASA/GISS Director James Hansen, for example, has argued that even sustained atmospheric concentrations of 350 ppm will eventually lead to dangerous climate changes such as the melting of the major ice sheets. Hansen's arguments have led to a popular climate change movement known as 350.org which indeed is aimed at achieving 350 ppm stabilization.

One might, of course, argue that other geoengineering approaches, such as solar radiation management (which we will investigate in the next section of this lesson) could accomplish this goal. However, as we shall see, one critical flaw in schemes that try to offset greenhouse warming with cooling techniques from, e.g., sulphate aerosols, is that this does nothing to halt the buildup of CO2 in the atmosphere and, as we have seen earlier in this course, the buildup has other serious consequences, such as ocean acidification.