We have already seen an example of a natural mode of climate variability above in the AMO. However, the single most important mode of natural variability in the climate system—certainly on interannual timescales—is the El Niño/Southern Oscillation or ENSO. ENSO represents a coupled mode of the ocean and atmosphere, which is to say that the atmosphere influences the ocean (primarily through the impact of surface winds on horizontal and vertical 'upwelling' ocean currents), while the oceans, in turn, influence the atmosphere (primarily through the effect of east/west variations in ocean surface temperature, which, in turn, drive a pattern of circulation in the overlying atmosphere). The net result is that the tropical Pacific combined ocean/atmosphere system naturally oscillates with a characteristic timescale of roughly 2-7 years.

During the El Niño phase of the oscillation, the eastern/central tropical Pacific is warmer than usual. Sea level in the eastern tropical Pacific is higher than usual because the waters are warm (and thus less dense), in the absence of vertical upwelling of colder, denser water. The warmer waters in the central equatorial Pacific lead to rising motion in the atmosphere, shifting the rising limb of the so-called Walker Circulation (the vertical and longitudinal pattern of atmospheric circulation over the equatorial Pacific), and associated tendency for rainfall, from its normal position in the western equatorial Pacific. This circulation pattern, in turn, implies a decrease in the strength of the easterly trade winds in the eastern tropical Pacific. But it is those trade winds that are responsible for upwelling of the cold waters in the first place. Thus, the ocean and atmosphere work in concert to sustain the ENSO pattern of temperature, winds, and rainfall. The La Niña state, when sea surface temperatures are cooler than normal in the eastern and central tropical Pacific, is based on these various features of the tropical Pacific ocean-atmosphere system being opposite to that described above for the El Niño phase. 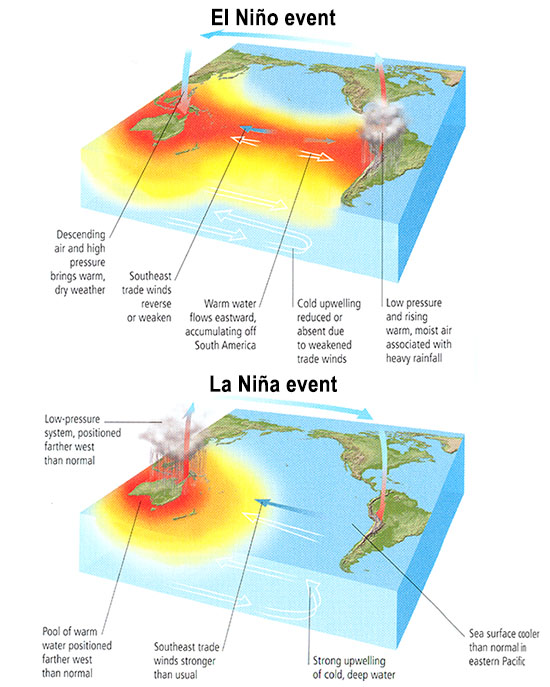 The system tends to oscillate between the El Niño and La Niña phases because of equatorial ocean wave dynamics that are beyond the scope of this course. The net effect of these waves—Kelvin waves and Rossby waves—is to make the system unstable so that it does not persist either in the El Niño or La Niña phase for more than a year or so, constantly oscillating between these two phases with a characteristic 2-7 year timescale. 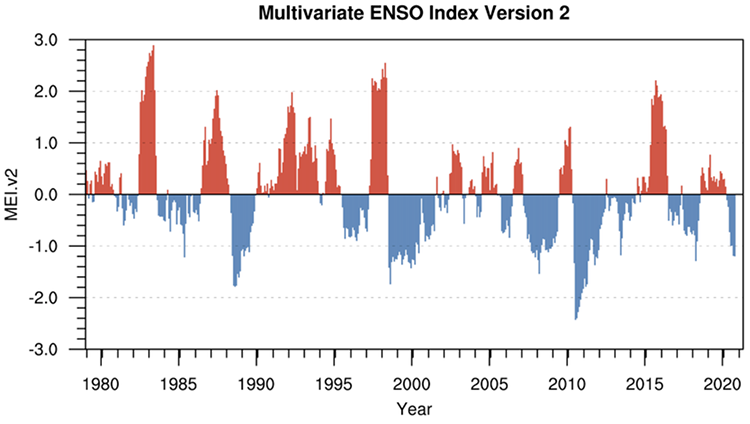 Figure 3.18: Animation of SST Over the Course of an Observed La Niña to El Niño Transition.
Credit: NOAA

By some measures, ENSO is the largest signal in the observational climate record, even competing with the climate change signal itself. That is because El Niño and La Niña events can be large, leading to more than a degree C cooling or warming over a large part of the tropical Pacific ocean, and ENSO events have global teleconnections. That is to say, ENSO affects seasonal weather patterns around the world through the impact of the tropical Pacific cooling/warming on the extratropical jet streams, the Monsoons, and other regional atmospheric circulation patterns. As we will see in the next section, ENSO even influences Atlantic seasonal hurricane activity. The largest and most reliable regional impacts of ENSO are shown below: 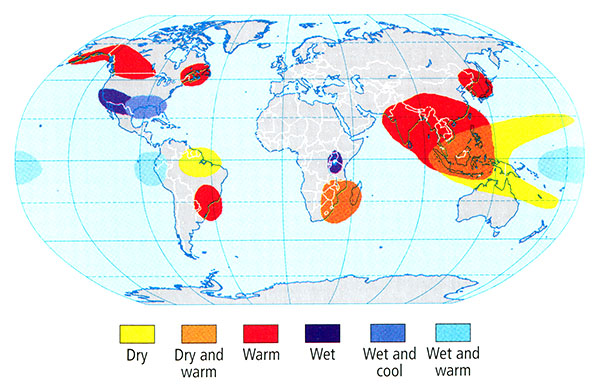 Given the prominent impact of ENSO on year-to-year variations in climate around the world, it is well worth asking, how might ENSO itself change, in response to human-caused climate change? Such questions are key to assessing regional impacts of future climate change. Yet, we don't have the firm answers here that one might expect or want. In the time series plot above, there does seem to be some evidence of a trend towards more El Niño-like conditions in recent decades, but it is difficult to establish any statistical significance in this trend. Indeed, some climate models suggest the possibility of the opposite trend—a prevalence of the La Niña state—in response to anthropogenic climate change. We will return to the issue of climate variability in a later lecture on projections of future climate change.