TIGER/Line Shapefiles are digital map data products extracted from the MAF/TIGER database. They are freely available from the Census Bureau and are suitable for use by individuals, businesses, and other agencies that don’t have direct access to MAF/TIGER.

This section outlines the geographic entities represented in the MAF/TIGER database, describes how a particular implementation of the vector data model is used to represent those entities, and considers the accuracy of digital features in relation to their counterparts on the ground. The following page considers characteristics of the “Shapefile” data format used to distribute digital extracts from MAF/TIGER.

The MAF/TIGER database is selective. Only those geographic entities needed to fulfill the Census Bureau’s operational mission are included. Entities that don't help the Census Bureau conduct its operations by mail, or help field workers navigate a neighborhood, are omitted. Terrain elevation data, for instance, are not included in MAF/TIGER. A comprehensive list of the "feature classes” and “superclasses” included in MAF/TIGER and Shapefiles can be found via the MAF/TIGER Feature Class Codes (MTFCCs) link on the list of Geographic Codes on the Census.gov > Geography > Reference page. Examples of superclasses include:

Note also that neither the MAF/TIGER database nor TIGER/Line Shapefiles include the population data collected through questionnaires and by census takers. MAF/TIGER merely provides the geographic framework within which address-referenced census data are tabulated.

As stated above, we want you to get a sense of the sorts of data that are available for the various geographies -- from the county to the national level. Perusing the various layers as I had you doing above makes it difficult to make an overall assessment of what data there are at a given geographic scale. Fortunately for our purposes, the Census has provided a convenient table to help us in this regard.

From the TIGER/Line Shapefiles page,

Like other implementations of the vector data model, MAF/TIGER represents geographic entities using geometric primitives including nodes (point features), edges (linear features), and faces (area features). These are defined and illustrated below. 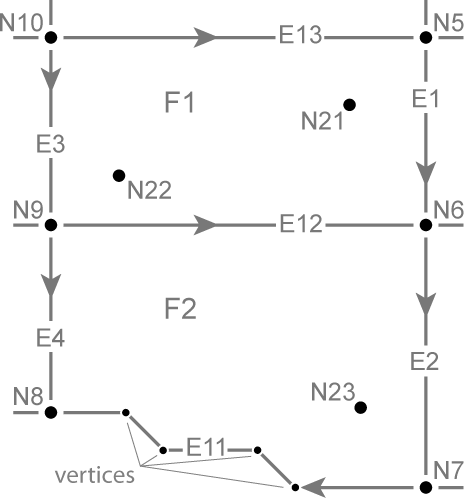 Figure 4.4.1 Geometric primitives of the Topologically Integrated Geographic Encoding and Referencing (TIGER) database. The figure shows what might be two adjacent Census blocks, with the bottom block bounded on the south by a river. The remaining edges might correspond to streets, and the isolated nodes might be landmarks such as a school, a church, and a zoo.

Until recently, the geometric accuracy of the vector features encoded in TIGER was notoriously poor (see figure below). How poor? Through 2003, the TIGER/Line metadata stated that

Coordinates in the TIGER/Line files have six implied decimal places, but the positional accuracy of these coordinates is not as great as the six decimal places suggest. The positional accuracy varies with the source materials used, but generally, the information is no better than the established National Map Accuracy standards for 1:100,000-scale maps from the U.S. Geological Survey (Census Bureau 2003).

Having performed scale calculations in Chapter 2, you should be able to calculate the magnitude of error (ground distance) associated with 1:100,000-scale topographic maps. Recall that the allowed error for USGS topographic maps at scales of 1:20,000 or smaller is 1/50 inch (see the nationalmap standards pdf). 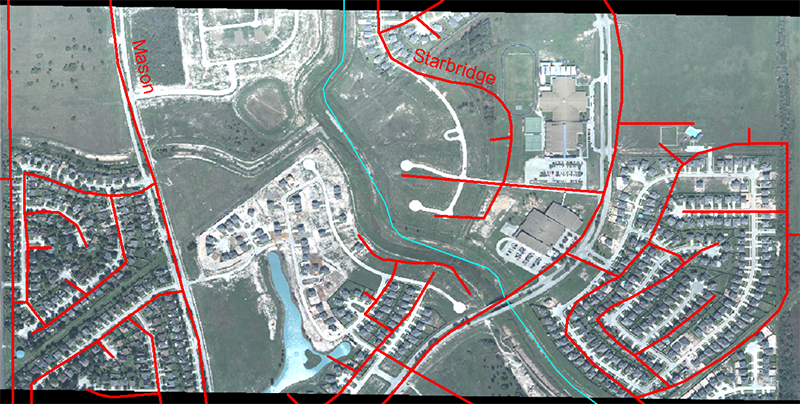 Starting in 2002, in preparation for the 2010 census, the Census Bureau commissioned a six-year, $200 million MAF/TIGER Accuracy Improvement Project (MTAIP). One objective of the effort was to use GPS to capture accurate geographic coordinates for every household in the MAF. Another objective was to improve the accuracy of TIGER's road/path features. The project aimed to adjust the geometry of street networks to align within 7.6 meters of street intersections observed in orthoimages or measured using GPS. The corrected streets are necessary not just for mapping, but for accurate geocoding. Because streets often form the boundaries of census areas, it is essential that accurate household locations are associated with accurate street networks.

MTAIP integrated over 2,000 source files submitted by state, tribal, county, and local governments. Contractors used survey-grade GPS to evaluate the accuracy of a random sample of street centerline intersections of the integrated source files. The evaluation confirmed that most but not all features in the spatial database equal or exceed the 7.6-meter target. Uniform accuracy wasn’t possible due to the diversity of local source materials used, though this accuracy is the standard in the "All Lines" Shapefile extracts. The geometric accuracy of particular feature classes included in particular shapefiles is documented in the metadata associated with that shapefile extract.

MTAIP was completed in 2008. In conjunction with the continuous American Community Survey and other census operations, corrections and updates are now ongoing. TIGER/Line Shapefile updates are now released annually.

This textbook is used as a resource in Penn State's Online Geospatial Education online degree and certificate programs. If this topic is interesting to you and you want to learn more about online GIS and GEOINT education at Penn State, check out our Geospatial Education Program Office.
‹ 2. MAF/TIGER up 4. Shapefiles ›
The Nature of Geographic Information