Photogrammetry is a profession concerned with producing precise measurements of objects from photographs and photoimagery. One of the objects measured most often by photogrammetrists is the surface of the Earth. Since the mid-20th century, aerial images have been the primary source of data used by USGS and similar agencies to create and revise topographic maps. Before then, topographic maps were compiled in the field using magnetic compasses, tapes, plane tables (a drawing board mounted on a tripod, equipped with an leveling telescope like a transit), and even barometers to estimate elevation from changes in air pressure. Although field surveys continue to be important for establishing horizontal and vertical control, photogrammetry has greatly improved the efficiency and quality of topographic mapping.

A straight line between the center of a lens and the center of a visible scene is called an optical axis. A vertical aerial photograph is a picture of the Earth's surface taken from above with a camera oriented such that its optical axis is vertical. In other words, when a vertical aerial photograph is exposed to the light reflected from the Earth's surface, the sheet of photographic film (or a digital imaging surface) is parallel to the ground. In contrast, an image you might create by snapping a picture of the ground below while traveling in an airplane is called an oblique aerial photograph, because the camera's optical axis forms an oblique angle with the ground. 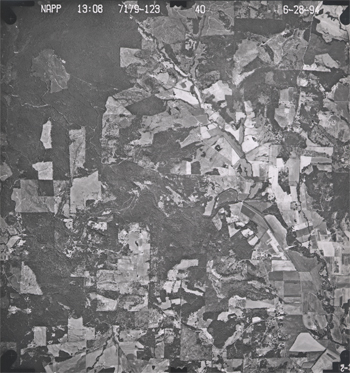 The nominal scale of a vertical air photo is equivalent to f / H, where f is the focal length of the camera (the distance between the camera lens and the film -- usually six inches), and H is the flying height of the aircraft above the ground. It is possible to produce a vertical air photo such that scale is consistent throughout the image. This is only possible, however, if the terrain in the scene is absolutely flat. In rare cases where that condition is met, topographic maps can be compiled directly from vertical aerial photographs. Most often, however, air photos of variable terrain need to be transformed, or rectified, before they can be used as a source for mapping.

Government agencies at all levels need up-to-date aerial imagery. Early efforts to sponsor complete and recurring coverage of the U.S. included the National Aerial Photography Program, which replaced an earlier National High Altitude Photography program in 1987. NAPP was a consortium of federal government agencies that aimed to jointly sponsor vertical aerial photography of the entire lower 48 states every seven years or so at an altitude of 20,000 feet, suitable for producing topographic maps at scales as large as 1:5,000. More recently, NAPP has been eclipsed by another consortium called the National Agricultural Imagery Program. According to student Anne O'Connor (personal communication, Spring 2004), who represented the Census Bureau in the consortium:

A large portion of the country is flown yearly in the NAIP program due to USDA compliance needs. One problem is that it is leaf on, therefore in areas of dense foliage, some features are obscured. NAIP imagery is produced using partnership funds from USDA, USGS, FEMA, BLM, USFS and individual states. Other partnerships (between agencies or an agency and state) are also developed depending upon agency and local needs.

Aerial photography missions involve capturing sequences of overlapping images along many parallel flight paths. In the portion of the air photo mosaic shown below, note that the photographs overlap one another end to end and side to side. This overlap is necessary for stereoscopic viewing, which is the key to rectifying photographs of variable terrain. It takes about 10 overlapping aerial photographs taken along two adjacent north-south flightpaths to provide stereo coverage for a 7.5-minute quadrangle.

Use the USGS' EarthExplorer (http://earthexplorer.usgs.gov/) to identify vertical aerial photographs that show the "address/place" in which you live. How old are the photos? (EarthExplorer is part of a USGS data distribution system.)

Note: The basemap imagery that you see on the EarthExplorer map is not the same as the NAPP photos the system allows you to identify and order. By the end of this chapter, you should know the difference!

This textbook is used as a resource in Penn State's Online Geospatial Education online degree and certificate programs. If this topic is interesting to you and you want to learn more about online GIS and GEOINT education at Penn State, check out our Geospatial Education Program Office.
‹ 9. Theme: Orthoimagery up 11. Perspective and Planimetry ›
The Nature of Geographic Information