Design and Optimization of Separators

Once oil and gas are brought to the surface, our main goal becomes that of transportation of the oil and gas from the wellhead to the refinery (for final processing). All equipment and processes required to accomplish this are found at the surface production facility. Hence, all surface production starts right at the wellhead. Starting at the wellhead, the complex mixture of produced fluids makes its way from the production tubing into the flow line. Normally, many wells are drilled to effectively produce the hydrocarbons contained in the field. From each of these wells emerge one or more flow lines depending on how many layers are being produced simultaneously. Depending on the physical terrain of the area and several other environmental factors, each of the flow lines may be allowed to continue from the wellhead to a central processing facility commonly referred as a production platform or a flow station, which then carries the fluids to the production platform. The combination of the wellhead, the flow lines, bulk headers, valves and fittings needed to collect and transport the produced fluid to the production platform is referred to as the gathering system.

The gathered fluids must be processed to enhance their value. First of all, fluids must be separated into their main phasial components - namely, oil, water, and natural gas. The separation system performs this function. For this, the system is usually made up of a free water knock-out (FWKO), flow line heater, and oil-gas (two-phase) separators. We will be looking at the design of this last component.

The physical separation of these three phases is carried out in several steps. Water is separated first from the hydrocarbon mixture (by means of the FWKO), and then the hydrocarbon mixture is separated into two hydrocarbon phases (gas and oil/condensate). A successful hydrocarbon separation maximizes production of condensate or oil, and enhances its properties. In field applications, this is accomplished by means of stage separation. Stage separation of oil and gas is carried out with a series of separators operating at consecutively reduced pressures. Liquid is discharged from a higher-pressure separator into the next-lower-pressure separator. The purpose of stage separation is to obtain maximum recovery of liquid hydrocarbons from the fluids coming from the wellheads and to provide maximum stabilization of both the liquid and gas effluents.

Surface Production Facility: The physical installation where fluids coming from the wellhead are separated into three main constituents: water, oil, and natural gas.

Usually it is most economical to use three to four stages of separation for the hydrocarbon mixture. Five or six may payout under favorable conditions, when — for example — the incoming wellhead fluid is found at very high pressure. However, the increase in liquid yield with the addition of new stages is not linear. For instance, the increase in liquids gained by adding one stage to a single-stage system is likely to be substantial. However, adding one stage to a three or four-stage system is not as likely to produce any major significant gain. In general, it has been found that a three-stage separating system is the most cost-effective. Figure 20.2 shows this typical configuration.

Under the assumption of equilibrium conditions, and knowing the composition of the fluid stream coming into the separator and the working pressure and temperature conditions, we could apply our current knowledge of VLE equilibrium (flash calculations) and calculate the vapor and liquid fractions at each stage. However, if we are looking at designing and optimizing the separation facility, we would like to know the optimal conditions of pressure and temperature under which we would get the most economical profit from the operation. In this context, we have to keep in mind that stage separation aims at reducing the pressure of the produced fluid in sequential steps so that better and more stock-tank oil/condensate recovery will result.

Let us look at the case of three-stage separation. In general, temperature conditions in the surface separation facility are very much determined by the atmospheric condition and incoming stream temperatures. As for pressures, the very first separator pressure is controlled by the gathering lines coming from well heads, thus there is not much room for playing with pressure in the first separator. The same arguments are valid for the last stage of separation (stock tank), which usually operates at atmospheric conditions. Therefore, we are only left with the middle separator for optimization.

As it turns out, the key to designing a three stage separation system is finding the optimum pressure at which to operate the second separator. The question that we would answer is “what is the pressure that will result in the best quality liquid going out of the stock tank for sales?” We do not want to do this empirically. This is, we do not want to play with the second stage separator pressure in the field, until we ultimately find the optimum condition. What we can do, using our phase behavior knowledge, is to find this optimum middle stage pressure applying our understanding of VLE equilibrium.

Figure 20.3 shows the typical effect of playing with the middle separator pressure on the quality and quantity of produced oil/condensate at the stock tank. Quality and quantity are measured in terms of properties, such as API and Bo, and the overall GOR at the separation facility. 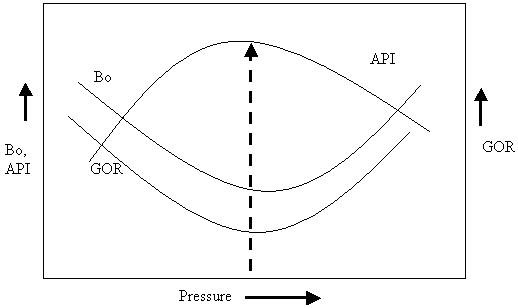 The optimum value of pressure for the middle stage is the one that produces the maximum liquid yield (by minimizing GOR and Bo) of a maximum quality (by maximizing stock-tank API gravity). The smaller the value of GOR and Bo, the larger the liquid yield. The higher the API gravity of the stock-tank fluid, the more profitable its commercialization. From Figure 20.2, we see that this condition is found at neither extreme (low/high) values of middle stage pressure. There is, in fact, an optimal value for middle stage pressure. This is the value we are looking for.

The Phase Behavior model that we have described throughout these series of lectures provides the basic framework for the type of calculations required here. Additionally, we discussed how API and Bo can be calculated using the output of the phase behavior model. While doing the calculations for a 3-stage separating system, keep in mind that we have minimal control over feed pressure, as we do not want to inhibit the well (high-pressure separator). We do not control the sales line pressure (stock-tank pressure) either. The control that we do have is the operating pressure of the middle separator.

Recall that finding the optimum pressure calls for, in part, finding the minimum gas to oil ratio (GOR, SCF/STB). We are dealing, in this case, with total GOR. The total GOR is the cumulative amount of gas from all three separators divided by the amount of liquid/condensate leaving the stock tank. During our discussion on Bo-calculations, we called “nst” the moles of liquid leaving the stock tank per mole of feed entering the separation facility. This number can be obtained by sequentially flashing 1 lbmol of feed through each of the separation stages. Recalling the definition of GOR,

Usually, the stock tank is considered to operate at standard conditions (psc, Tsc). Now you are ready to make your own surface separation design!