Once natural gas is produced and processed, few to several hundred miles may lie in between it and its final consumers. A cost-effective means of transport is essential to bridge the gap between the producer and consumer. In the technological arena, one of the challenges pertains to the capacity of the industry to ensure continuous delivery of natural gas while its demand is steadily increasing. Thus, it is no wonder that pipelines have become the most popular means of transporting natural gas from the wellhead to processing — and from there to the final consumer — since it better guarantees continuous delivery and assures lower maintenance costs.

Phase Behavior (P-V-T data) is crucial for all our engineering designs. Accurate prediction of the P-V-T properties of natural gases is especially critical when dealing with pipeline design, gas storage, and gas measurement. While describing natural gas pipeline design, it is necessary to distinguish between two cases: the design of pipelines for transportation of regular dry gases (no liquid, single-phase transportation) and the design of pipelines for transportation of wetter gases — where multiphase conditions due to condensate dropout may are possible.

The major variables that affect the design of gas pipelines are: the projected volumes that will be transported, the required delivery pressure (subject to the requirements of the facilities at the consumer end), the estimated losses due to friction, and the elevation changes imposed by the terrain topography. Overcoming such losses will likely require higher pressure than the one available when the gas is being produced. Thus, forcing a given gas rate to pass through a pipeline will inevitably require the use of compressor stations.

Loss in mechanical energy results from moving fluids through pipelines. Energy losses in a pipeline can be tracked by virtue of the pressure and temperature changes experienced by the flowing stream. Design equations relate pipeline pressure drop with the gas flow rate being transported. The following is the general equation for a single-phase gas pipeline flow in steady state:

Note that flow rate is proportional to the inverse square root of compressibility (Z). For near-ideal conditions, the effect of compressibility on flow rate is likely to be small. But for high-pressure flows, Z may deviate greatly from 1. Under these conditions, inaccuracy in the prediction of Z may lead to a substantial error in the calculated flow rate and thus a completely wrong pipeline sizing for design purposes.

Once a pipeline is deployed, it has a more or less a fixed operational region. An upper and lower set of operational conditions allowable within the pipeline (in terms of pressure and temperature) will exist. On the one hand, the upper allowable condition will be set by the pipe strength, pipe material, diameter, and thickness. These will dictate the maximum pressure that the pipe can endure without failure (i.e., maximum operating pressure). On the other hand, maximum pressure and temperature of the compressor station discharge (which feeds the inlet of the pipe) will also contribute to set this upper level. It is clear that the conditions at the discharge of the compressor station cannot go beyond the maximum operating pressure of the pipe — otherwise the pipe will fail. The minimum or lower pressure and temperature condition of the operational region will be assigned by contractual agreement with the end consumer. The foregoing description of the operational region is shown schematically as the shaded area in Figure 21.1. 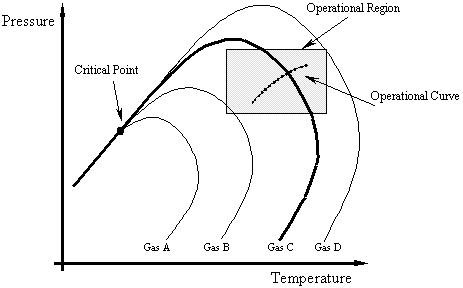 In natural gas flow, pressure and temperature changes (P-T trace) may cause formation of a liquid phase owing to partial condensation of the gaseous medium. Retrograde phenomenon — typically found in multi-component hydrocarbon systems — takes place by allowing condensation of the gas phase and liquid appearance even under expansion of the flowing stream. The same phenomenon may also cause vaporization of the liquid phase such that it reenters the gas phase. Liquid and gas phase composition are continuously changing throughout the pipe due to the unceasing mass transfer between the phases. In general, the amount of heavies in the stream determines the extent of the retrograde behavior and liquid appearance. Figure 21.1 shows a P-T trace or operational curve for a given pipeline, which is always found within the pipeline operational region.

Figure 21.1 also shows four typical phase envelopes for natural gases, which differ in the extent of their heavy components. For a given composition, the prevailing pressure and temperature conditions will determine if the fluid state is all liquid (single-phase), all gas (single-phase) or gas-liquid (two-phase). Each envelope represents a thermodynamic boundary separating the two-phase conditions (inside the envelope) from the single-phase region (outside). Each envelope is made of two curves: the dew point curve (right arm, where the transition from two-phase to single-gas occurs) and the bubble point curve (left arm, where the transition from single-liquid to two-phase occurs). Both arms meet at the critical point, which is shown in Figure 21.1. The wetness of the gas is an important concept that helps to explain the different features presented in Figure 21.1. This concept pertains to the amount of heavy hydrocarbons (high molecular weight) that are present in the gas composition. In Figure 21.1, the driest gas — i.e., the least wet — can be recognized as that whose left and right arms are the closest to each other, having the smallest two-phase region (gas A). In this figure, it can be seen that the right arm is extremely susceptible to the presence of heavies in the natural gas composition. Depending on the gas composition, the pipeline operational region can be either completely free of liquid (gas A, the driest) or partially submerged in the two-phase region (gas B, C). If the gas is wet enough, the pipeline will be entirely subjected to two-phase conditions (gas D, the wettest). One may describe the sensitivity of the right arm to heavies as having a hook-seizing effect: the larger the extent of heavies in the natural gas, the more the ‘hook’ is able to seize part of the pipeline operational region. In conclusion, since the operational region is more or less given by contractual and design considerations, the liquid presence in a pipeline is ultimately dictated by the properties of the gas that is being transported.

In the preceding figure, a pipeline handling a dry gas (gas A) will be operating a single-phase mode from its inlet through its outlet. For this case, any of the popular single-phase gas equations (Weymouth, Panhandle type, AGA equation) can be used for design purposes and to help to predict the actual operational curve (P-T trace). If a richer gas comes into the system (gas C), it will show a single-phase condition at the inlet, but after a certain distance the pressure and temperature conditions will be within the two-phase region. The case might also be that the system is transporting a wetter gas (gas D), in which case it would encounter two-phase conditions both at the inlet and at the outlet of the pipe.

Penn State has devoted a great deal of effort in the development of two-fluid models for the description of multi-phase flow condition in natural gas pipelines. In this approach, mass, momentum, and energy equations are solved simultaneously. Some simplifying assumptions are made based on engineering judgment. For instance, the knowledge of averaged flow field characteristics and fluid properties at every point of the pipeline is usually more meaningful than a detailed profile of the said properties within the cross section. Hence, generally speaking, the two-fluid model always deals with conservation equations written only in one dimension for pipeline flow (the direction of the flow along the pipe), employing cross-sectional-averaged values for each term. The use of averaged quantities absorbs the variations across the pipe section. Pressures and temperatures are assumed to be the same in both phases at any given point of the pipe. Additionally, since the main interest is to focus on normal operation conditions, the further simplification of steady state conditions is invoked.

As we have discussed, phase behavior is a crucial component in pipeline design. Not only because we need to account for gas volumetric behavior in the design equations (through, for instance, Z-factor calculations), but also because it provides a means for predicting whether multi-phase flow conditions are to be found. Liquid appearance in natural gas pipelines is as undesirable as it is inevitable. On one side, the fluid phase behavior and prevailing conditions make it inevitable. On the other, the condensate subjects the gas pipe to an increasing and undesirable energy loss. Thus, a proper pipeline design must account for the effect of condensate formation on the performance of the gas line.