A geodatabase topology is another construct that is stored within a geodatabase and gives us added control over assessing and maintaining the integrity of our spatial data.

Follow this link to download the data for this part of the lesson: Topology_ArcMap.zip
The zip archive contains the following:
An Esri Personal Geodatabase: geodatabasetopol.mdb
A zip archive: TopologyProject.zip

A geodatabase topology provides a robust way of defining topological relationships among spatial features. It does so by analyzing coordinate locations of feature vertices both among features within a feature class and between features in multiple feature classes taking part in the topology. Therefore, it is not only important that all of the feature classes participating in a geodatabase topology be in the same coordinate system, but also that the measurement precision defined for each feature class be the same. To assure that this is the case, all feature classes that take part in a geodatabase topology must reside within what is known as a Feature Dataset. When a feature dataset is created, the coordinate system and precision are defined, and any subsequent feature class that is added to the feature dataset inherits that coordinate system and precision. In the exercise that follows, you will see that the precision is controlled by the Tolerance and Resolution settings. I encourage you to read more about these topics in the Desktop Help when you have time. Search on "topology rules", and then select the "Topology in ArcGIS" topic entry.

A geodatabase topology is governed by topology "rules" that the user specifies, and those rules are based on knowledge of the relationships between and among the features that will be taking part in the topology. So the onus is on the user to understand the data being created/edited in order that appropriate rules are specified. Rules can be added to and taken away from a topology as long as the data is not part of an active ArcMap editing session.

The manifestation of a geodatabase topology is as a layer in the feature dataset. As such, the topology errors that it contains are symbolized just as are the features in any other map layer in ArcMap. In the Desktop Help, search on "topology rules", and then select the "Geodatabase topology rules and topology error fixes" topic entry. This will take you to a compilation of the types of rules that can be defined along with suggestions for ways to fix violations of each rule and a description of how the errors are symbolized in the map data frame, as Points, Lines, and Areas. If you are inclined to adorn your walls with GIS help guides, you will find a link to a topology rules poster in the opening passage to the Help page I just referred you to. Whether you print it out or not. it offers a bit more in the way of graphic description and examples of the rules.

As is mentioned above, one needs to be aware of how the features involved in a geodatabase topology relate to each other in order to be able to define appropriate topology rules to govern the creation of spatial data and aid in discovering errors in existing data. In the following exercise, we will be working with the data depicted in the image below, and I will be the arbitrary source of what is known about the relationships among the features in the four feature classes involved. We will be basing our choices of rules on the following: 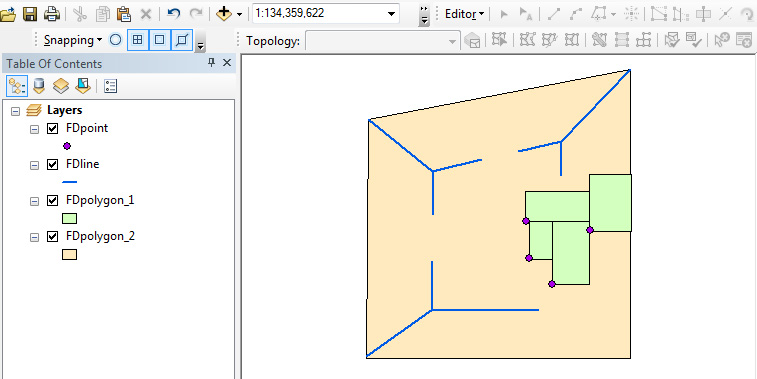 Figure 5.14: The ArcMap interface, showing the four feature classes, contained in the geodatabasetopol.mdb personal geodatabase, that you will be working with in this part of the lesson.

A. Create and interact with a Geodatabase Topology

With a geodatabase topology in place, there are certain tools at your disposal that enable you to maintain topological relationships when you make edits to spatial data. Here, we contrast editing a shared polygon boundary with and without having a geodatabase topology set up. It is important to realize that the "shared" boundary between two polygons actually is a duplicate set of line segments, each polygon boundary exists as complete and independent from the adjacent polygon. So when a shared boundary needs to be edited, one must actually edit the boundaries of two polygons.

Because this is not a course in inputting and editing spatial and attribute data, we are choosing to focus on what needs to be done to prepare to implement a geodatabase topology. There will be some errors in spatial data to repair, but it involves going over ground already covered in section A of the lesson.

The BuildingFootprints feature class contains some instances of polygon overlap that need to be repaired.

In order for you to accomplish finding and repairing the errors in the BuildingFootprints feature class, you are going to have to create and employ a geodatabase topology. You know from section A how to create a geodatabase topology, and you know that in order to do so the data in question has to reside within a feature dataset. What we did not explicitly go over in the lesson was how to (1) create a feature dataset, and (2) how to get existing data, in this case the feature class contained in the TopologyProject.gdb, into a feature dataset that we create. But that's what I want you to do. Given that Geography 484 or comparable experience was the prerequisite for taking this course, you should be able to do it.

Once you have accomplished that, proceed to find and correct the overlapping building footprint polygons. All of the offending features will be in the area covered by the included georeferenced map image. You can use it as reference to make sure you are performing the corrections to the polygons correctly.

When you finish, zip up your version of the TopologyProject.gdb and upload it to the Lesson 5 Drop Box.