Welcome to EARTH 530, "Earth Surface Processes in the Critical Zone." 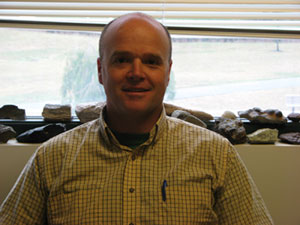 I am Dr. Tim White, the author of and instructor for the online "EARTH 530: Earth Surface Processes in the Critical Zone" course. I am a Research Professor in the Earth and Environmental Systems Institute (EESI) and a member of the graduate faculty in the Department of Geosciences at Penn State’s University Park (main) campus in central PA. Please address me as Tim.

I was born in Allentown, PA, but spent the first six years of my life bouncing between naval bases with a father in the Navy, before we returned to Allentown. I completed my undergraduate degree in geology at Washington and Lee University in Lexington, VA, and an MS in geology at Penn State in 1989. Subsequently, I spent 4 years working in the environmental-hydrogeologic consulting industry.

In 1993, I returned to Penn State to pursue a Ph.D. in geosciences. My dissertation research involved field studies in the Western Interior Basin, primarily in southern CO and UT, of strata that recorded sea level changes and paleoceanography during a greenhouse episode that occurred approximately 95 million years ago. In 1997, I began a post-doctoral fellowship at the University of Iowa to study ancient soils of approximately the same age as the strata I studied during my Ph.D. pursuit.

The next step in my career involved 3.5 years with the U.S. Geological Survey in Anchorage, Alaska. This was an exciting and fascinating time in my career—I maintain ongoing research projects and friendships in Alaska and typically spend a few weeks per year in the Great North.

My research responsibilities at Penn State have led to travels all over the globe. Currently, I primarily work in western Europe, Argentina and Puerto Rico, though I have worked for months at a time at sea, and in Australia, Mexico, and Brazil. During summer 2007, I spent two weeks with colleagues from Penn State and five European universities in Svalbard studying an ancient greenhouse episode that some scientists conclude may represent our not too distant future—imagine crocodiles and subtropical jungles at 80ºN latitude. That was the world 50 million years ago that we are investigating.

During summer 2008, I was busy as part of a team-taught paleoclimatology course in Italy and with field work in Italy, Spain, and France. I attended the International Geological Congress in Oslo, Norway; performed field work in Alaska and Pennsylvania; and did a lot of house and yard work. Also some vacation on Lake Champlain, the Adirondacks, and New Hampshire. During 2009 my field studies have included travel to Florida (twice), Wales and Argentina. Since that time I have spent a lot of time circulating for work and pleasure between all of the aforementioned locales, and then some. Most recently I developed and led with Antonello Provenzale (CNR, Italy) a summer school for graduate students in the Italian Alps entitled "Critical Zone and Ecosystem Dynamics".

I am a NAUI SCUBA instructor and oversee Penn State’s Science Diving program (https://www.research.psu.edu/scidive). We have courses that involve diving in Florida, the Bahamas and Curacao, and throughout PA. I also dive recreationally wherever I go. I play ice hockey for the Geohabs in the NHL (Nittany Hockey League), and am an avid swimmer, hiker, skier (xc and downhill), and backpacker.