The Habitable Zone and Earth’s Oceans 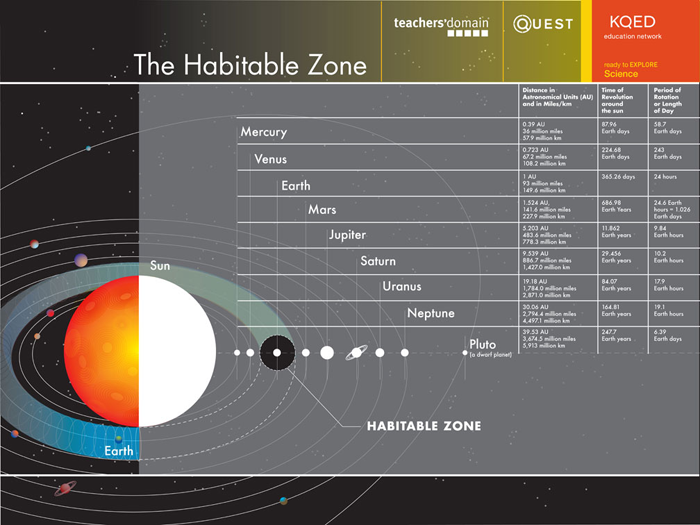 In our Astrobiology Research Center at Penn State, there is a room called “The Habitable Zone.” This whimsical name is a reference to a concept that has developed in the search for life on other planets. Of course, in “The Habitable Zone” room, there are comfortable couches, a coffee pot, computer connections and large screens for projection of computer images or teleconferences—all the ingredients for encouraging development of scientific intercourse, the lifeblood of the Astrobiology Research Center. A zone of habitability for life within a solar system has certain requirements too, including an optimal distance from a sun, optimal planet size and gravity, perhaps a magnetic field, and even the presence of a planet of large mass somewhere else in the solar system, among other characteristics. Some scientists speak of the “Goldilock’s Principle” for which everything needed to be “just right” for life to originate and prosper on Earth. We will explore this principle below, and you will need to discover what parameters are potentially important and why?

Question 1: What are the essential elements of a “habitable zone” for life and why is each important?

Not too long ago, we were pretty sure that Earth is the only planet in our solar system that has water present in all three phases on its surface. Quite a lot has changed in the past three or four years, with recent discoveries of liquid water on Europa, Mars and other bodies. Much of this is still very recent and uncertain, which makes it both exciting and also a nice example of science in action! For the Earth, oceans occupy about 71% of the surface area. Recent work suggests the presence of water oceans on Earth shortly after its formation (4.6 x 109 years ago), as early as 4.3 to 4.4 x 109 years ago. But from where did this water come? And why is there not abundant water on other planets today? Yes, we have good evidence for water in the subsurface on Mars, and water is a component of the Martian polar ice cap. Some scientists have suggested that water was once much more abundant on Mars’ surface—even forming large oceans.

Question 2: From where could Earth’s water have originated and what is the evidence in support of the origin(s)?

We don’t really have a definitive answer to this question at this time. Assuming that Earth and other planets accreted from a pre-existing solar nebula, possible sources of water on Earth could include capture of solar nebula gas (including volatile water vapor), adsorption of water from gas onto grains during accretion of these planets, accumulation and trapping of hydrous (water-bearing) minerals forming in the inner solar system or falling in from the asteroid belt, and impacts with comets and water-bearing meteors. Theories of the origin of water run the gamut from suggesting that all Earth’s water accumulated early in its history and, through various processes, was pooled into its vast surface oceans, to those that suggest importance for later water accumulation by repeated impacts of extraterrestrial objects. To be sure, Earth’s early accretion was a violent episode characterized by many impacts of “planetesimals,” from dust particles to objects as large as one tenth to one third of the mass of the accreting planet. Impacts ultimately provided sufficient energy to melt much of the earliest Earth, producing one or more “magma” (molten rock) oceans. At least one massive impact ejected material into Earth orbit, and this material subsequently accreted to form Earth’s Moon. We will revisit the Moon (at least in a virtual sense) and its significance to the oceans later in this course. Intense bombardment, referred to as the “late heavy bombardment”, ended about 3.9 x 109 years ago. Evidence for this includes the large lunar mare (huge basins) produced by these large impacts.