11.2 Role of Community and Social Networking

11.2 Role of Community and Social Networking

Social networks, both inter-personal and virtual, are known to have a strong influence on people's life, behavior, and choices. This influence can take any direction, negative or positive, conservative or destructive, depending on the network dynamics and trends. Lately, significant attention has been paid to the opportunities related to the promotion of sustainable behaviors through social networks.

As was shown by some community models (Xu et al., 2012), physical and social networks within which residents are connected and influence one another via certain relationships tend to foster notable savings in community energy consumption. Interestingly, the interpersonal closeness between members in the community, identified as a place-affiliated network, was found to create leverage for encouraging energy conservation behavior. Based on this study, the primary spheres of the community network include integrated buildings, occupant social networks, and surrounding neighborhood facilities. The integrated energy efficient building infrastructure is shown to have the potential for 2.3-22.3% energy savings; however, a social network is noted as an even more powerful factor, resulting in additional 11.7-31.1% of energy savings, when energy awareness is promoted through the interpersonal relationships (Xu et al., 2012). Social encouragement is seen as a more cost-effective way to energy conservation than physical upgrades and renovations. The residents are seen to be motivated to conserve energy when they are aware if their neighbors and friends are changing in similar ways. The third sphere of the community network - surrounding neighborhood facilities - are shown to promote social networking and its benefits. These facilities provide additional channels for people to communicate, and also provide physical grounds for shared monitoring systems and shared appliances and services.

Similarly, the social networks may play an important role in the diffusion of innovative technologies. Diffusion of Innovation is a theory describing patterns of technology adoption to society and predicting whether a particular innovation can be successful or not (Rogers, 2003; Kautz, 1999). The theory emphasizes the process of communicating an innovation through various channels in a social system. The four key elements that influence the spread of a new technology or idea are (i) innovation, (ii) communication channels, (iii) time, and (iv) social system (Rogers, 2003). Rogers also identifies five main steps in the innovation adoption process; those steps are: awareness, interest, evaluation, trial, and adoption. Theoretical timeline of technology adoption is illustrated in Figure 11.1. 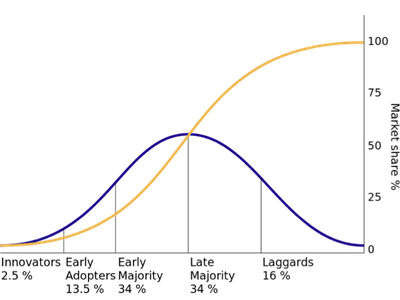 Figure 11.1. Dynamics of technology adoption according to the Diffusion of Innovation theory. The blue curve shows the gradual adoption of a new technology in % shares by different groups of people. Yellow curve shows the technology market share, which is eventually saturated.
Credit: Based on Rogers, E. (1962) Diffusion of innovations. Free Press, London, NY, USA. Licensed under Public domain via Wikimedia Commons

The Diffusion of Innovation theory puts the importance of the social networks and interpersonal channels above the mass media when it comes to adoption decisions, emphasizing several key agents  - opinion leaders, electronic communications, social and organizational hierarchies  - as triggers for change. There is an observation that people often evaluate a new idea based on the subjective recommendation by someone like themselves, who has evaluated and adopted that idea previously (Simpson, 2005).

The following article is a case study exploring the role of social involvement in the adoption of ideas of technology and sustainability. It provides an example of an application of the Diffusion of Innovation theory to rural communities in Australia.