The spread of disease often has strong environmental components. Likewise, when a population is heavily affected by disease, there can be significant impacts on the environment. This module engages with these factors to learn about health-environment interactions for infectious and non-infectious diseases in the United States and other settings.

The discipline of geography has approached disease in a number of ways. The subfield of medical geography has focused upon the spatial and ecological dimensions of human disease and geographic variations in health care delivery. This has built upon the discipline’s traditional strengths in spatial analysis, and more recently, the inclusion of technologies such as Geographic Information Science (GISc). Figure 1, for example, is a map produced by the Center for Disease Control in 2003 showing incidence of Lyme disease by county: 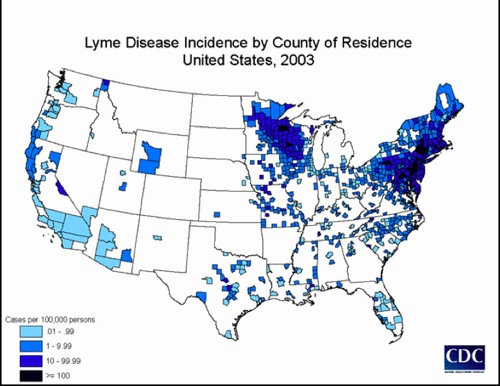 Figure 1: Lyme Disease by county in the United States in 2003.
Credit: http://www.freewebs.com/lymeandautism/LDIncidenceByCnty2003Map.jpg

The map shows that areas of higher incidence for Lyme disease are concentrated in the Northeast and around the Great Lakes. Yet, what are some limitations of this map in understanding Lyme disease?

First, the map is fixed in time (specifically the year 2003) and therefore we cannot understand whether Lyme disease is increasing or decreasing over time. While this map may seem alarming, particularly to those of us living in high incidence areas, it is possible that Lyme disease is decreasing over time. Second, the map shows Lyme disease by county at 100,000 persons or more; therefore, counties with low populations might not be represented in the map. Also, differences in vulnerability within counties cannot be easily understood. Incidents of Lyme disease are related to natural conditions where ticks are able to survive; therefore, certain areas within a county are more likely to be at risk for the presence of Lyme disease. Regardless, looking at the geography of an infectious disease in this way can help show variations within countries and between regions.

One infectious disease that is having tremendous impacts for social and ecological systems is malaria. Malaria is caused by a parasite called plasmodium that is transmitted through the bites of infected mosquitoes. The parasites multiply in the liver of the human body, and then infect red blood cells, causing various symptoms including fever, headache and vomiting. If left untreated, malaria can result in the death of the infected person. According to the World Health Organization, roughly 3.3 billion people, or half of the world's population, are at risk of malaria. Every year, this results in about 250 million malaria cases and nearly one million deaths. People living in the poorest countries are the most vulnerable with particularly high incidence of malaria in Sub-Saharan Africa. Within Africa, one in every five (20%) childhood deaths is due to the effects of the disease. An African child has on average between 1.6 and 5.4 episodes of malaria fever each year, and every 30 seconds a child dies from malaria (More information at the WHO website).

Figure 2 is a map of global malaria cases. Take a look at it to identify regions that have the highest rates of incidence. What is the geography of malaria? 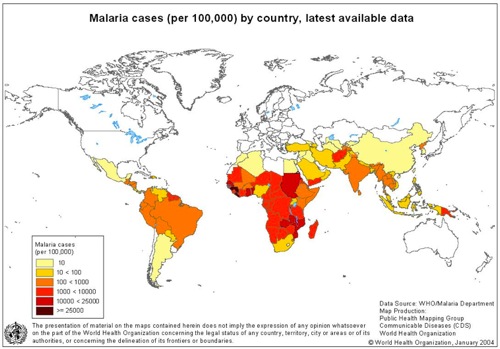 The map shows that malaria is concentrated within developing regions and along particular latitudes. What does it mean to be at risk for an infected disease? Some public health experts consider disease a hazard, much like was discussed in Module 1 (geographic perspectives). The spread of an infectious disease through exposure to mosquitoes is considered a natural hazard that is caused by natural conditions that contribute to the spread of mosquitoes, particularly standing water, warm temperatures, and certain agricultural and development projects that facilitate these conditions. Interventions designed to reduce the spread of malaria have concentrated upon removing breeding habitat for mosquitoes and managing natural landscapes to reduce disease vulnerability. To get a sense of some of the preventative strategies, take a look at the World Health Organization’s Global Malaria Programme at http://malaria.who.int/. One strategy has been to use bed nets and insecticides to kill mosquitoes within highly affected areas.

Yet a human disease such as malaria is also driven by social factors. Development and agricultural projects, for example, can contribute to conditions that expand breeding habitat for mosquitoes. National policies contribute to people being made vulnerable to malaria, and also influencing whether people live within high incidence areas. Finally, wealthier countries have instituted economic and political programs that have resulted in the near eradication of malaria. As Figure 3 shows, the United States used to have malaria in various regions before programs were instituted to eliminate the disease.

As discussed in Module 4 (climate change), increased concentrates of carbon dioxide and other greenhouse gases into the atmosphere are changing global climate. With climate conditions changing in the future, the conditions for pests also change. As one example, it is believed that the primary Malaria agent, the falciparum parasite, will be able to spread into new areas. Figure 4 is a map using projected climate change scenarios (using the Hadley CM2 high scenario) to predict malaria spread into 2050. Areas represented in red are vulnerable for possible expansion for malaria due to changing temperatures that make it hospitable for the malaria mosquito. Other areas, not displayed in the map, will be uninhabitable by the parasite, and are thus less vulnerable. 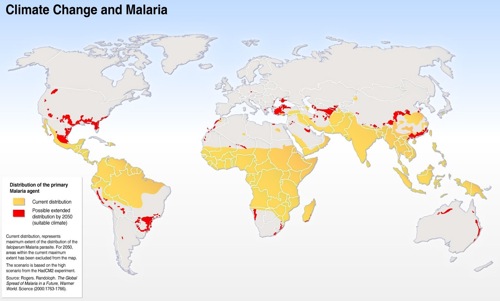 Self-check: Where is malaria potentially going to spread under climate change?

Where is malaria potentially going to spread under climate change? The expansion of malaria into areas where it is less common has various effects, straining the ability of health services to respond and also affecting populations that have not developed some immunity to the disease. To get a sense of this, watch the video “Highland Malaria” (2:40) on the Integrated Regional Information Network.

After watching the video, think about/write down the answers the following questions (remember, quiz questions may come from Self-checks!):

up
GEOG 30N Environment and Society in a Changing World