There are many steps we can take to prepare for natural hazards and to respond when extreme events occur. These steps can be divided into several categories, though it is important to note that there is no clear distinction between these categories.

When an extreme event is projected to occur, steps can be taken to make the event less of a disaster, i.e., to reduce the amount of harm that occurs. A key part of preparedness is in the projection itself. The more we know ahead of time about the event, and the further ahead of time we know it, the more effectively we can prepare for it. With prior warning, we can develop and implement plans to reduce harm. Note that it is not enough to have information about the upcoming event: the information must be communicated effectively so that the information is put to use. Given the information, there are several steps that can be taken. Some people can leave the affected area to avoid harm. Those who remain can make other preparations. Finally, those involved in disaster recovery efforts can make plans for their response.

Pre-event preparedness can be seen in preparations made in advance of Hurricane Katrina in 2005. Meteorologists forecasted the hurricane several days in advance. The director of the National Hurricane Center contacted the Mayor of New Orleans, the President of the United States, and others, expressing grave concern. This prompted a series of preparations. Evacuations were ordered; hundreds of thousands of people left the New Orleans area alone prior to the storm. Highways were set so that all lanes moved in the same direction: away. Those who remained made other preparations, such as those who gathered in the Louisiana Superdome for shelter. The Superdome was chosen in part because it was so large (about 26,000 people took shelter there) and in part because it was one of the few places in town situated above sea level, as can be seen from this photo: 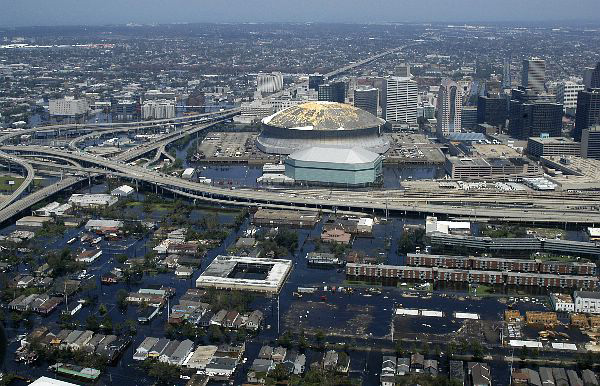 Figure 8.3 Aerial view of the city of New Orleans: The Superdome building is in the center and the rest of the city is flooded.
Credit: Navy-Flooded New Orleans by the US Navy from Wikipedia (Public Domain)

In addition to people evacuating and taking shelter, various public and private organizations planned for the subsequent emergency response. It should be noted that many people have criticized the pre-Katrina preparations as inadequate. But some preparations were made. Without these preparations, the damages would have been much more severe.

Immediately after an extreme event occurs, emergency response seeks to reduce harm. A core goal of emergency response is to help affected people survive: pulling people out from under the rubble, attending to major injuries, distributing food and water, and building shelter. Here people draw on whatever resources they can to keep people alive and in comfort. In major disasters, the international community will draw on its resources to deliver aid however possible. But emergency response also involves getting critical infrastructure back up and running as fast as possible. This infrastructure includes fuel and electricity, transportation routes, telecommunication systems, and clean water supplies. Indeed, an important part of the emergency response is quickly evaluating the scope and severity of the event and, in turn, what the key needs are.

Emergency response raises profound ethical questions. Imagine yourself standing in a disaster zone. Death and destruction are all around. What do you do? Who or what do you help? How would you decide what to do? For medical professionals, the situation is called triage: far more medical emergencies than can be addressed. One might neglect someone with “just a broken arm” in order to attend to someone who would otherwise die. Triage is a major use of ends ethics: the goal is to achieve the ends of the most lives saved.

‘Ushahidi’ is the Swahili word for ‘witness’ or ‘testimony.’ Ushahidi is also a community mapping website launched in 2008. Community mapping is a process for making a map in which community members feed information into the map. It is also called participatory mapping and is a form of crowdsourcing, in which tasks (in this case feeding information to the map) are outsourced to crowds. Ushahidi was developed by former residents of Kenya to help monitor protests and violence following the 2007 Kenya election, which many believed to have been manipulated. Since then, Ushahidi has also been used for emergency response to natural disasters, including the 2010 Haiti earthquake and the 2011 New Zealand earthquake. Prior to the Haiti earthquake, a technology like Ushahidi had never been used for an emergency situation of such a massive scale. Ushahidi is not the only group using cutting-edge mapping technology to assist with emergency response and other endeavors. Other groups include Crisis Mappers Net, OpenStreetMap, and CrisisCommons. While these projects are a novel innovation in emergency response, they share one important trait with all emergency response: using whatever resources are available to save lives and help out.

As the immediate emergency situation settles, focus shifts to the longer-term project of trying to get conditions back to normal, or at least as close to normal as can be achieved. As the most dire medical emergencies have been attended to (including cases in which patients die), treatment emphasizes bringing people back to full health. Buildings, roads, and other infrastructure are rebuilt and repaired. Basic needs are covered less and less from emergency stockpiles and outside aid and more and more from normal economic activity. The challenge of reconstruction can be seen vividly in the case of the 2010 Haiti earthquake. The earthquake killed over 300,000 people and destroyed many buildings. Five years later, conditions have still not returned to normal. Details of the situation can be seen in the following video produced by United Nations.

Click here for a transcript of Haiti: Disaster To Development video.

NARRATOR: At 4:53 in the afternoon on the 12th of January 2010 Haiti was hit by one of the most disastrous earthquakes in history. More than 200,000 people lost their lives and 1.5 million were displaced. The capital suffered catastrophic damage, crippling government buildings, and destroying millions of homes.

MARIE-JOSETTE DARIUS (MEMBER, MORNE HERCULE COMMUNITY PLATFORM): Lots of houses were destroyed. Others cracked, the houses shook, they were practically turned upside down. My family and I were housed in a camp. We spent more than 15 months there. You couldn't really live your life there.

NARRATOR: Three years later, Haitians are continuing to rebuild their lives. The residents of [?inaudible?] are recycling debris left from the earthquake to rehabilitate their neighborhood. Marie-Josette is a 35-year-old mother of two. She has recently been trained as a brick maker and represents the women of her community at the local Neighborhood Council.

MARIE-JOSETTE DARIUS: We did that to bring everyone together to identify the priority needs in the area. We had lots of problems after the earthquake, but some are more urgent than others. For example, we identified the Charlemagne Peralte road as urgent. Streetlights - because the girls and the young women were being attacked in the area. It's like a parliament. We discuss, talk and reach agreement.

NARRATOR: With the help of the United Nations development program, UNDP, neighborhood councils like these empower residents to prioritize issues and get access to resources.

MARC-ANDRE FRANCHE: People are the biggest wealth to rebuild their lives. They know what to do they know what needs to be done and they're the ones who can put the most energy into it.

NARRATOR: Since 2010, 1.2 million people have returned to their homes and 10 million cubic meters of rubble have been removed enabling Haiti to transition from disaster to long-term development.

MARC-ANDRE FRANCHE: You can see a lot of improvement. Not only has the debris been managed, rehabilitation of neighborhoods has started, and quite a bit of investments are now visible in those neighborhoods.

AFKE BOOTSMAN: There's the shared location of the debris is a big challenge. Haiti is built on many mountains where no heavy machinery can come. The culmination of community planning, debris removal, demolition recycling, and bringing back those recycled products into the neighborhoods at this scale is unprecedented.

MARC-ANDRE FRANCHE: The local economy has now started again. Jobs have been created in power plants and outside. It demonstrates that when the international community and the government get together and provide the money and the investments are made change is possible.

MARIE-JOSETTE DARIUS: The streetlights, the repair of Charlemagne Peralte road, a water project that will build water kiosks for the most vulnerable residents in the area paving the paths. Before, I didn't think I'd see Morne Hercule and the road the way they are today. Before, it was muddy everywhere. I thought it was a dream.

Recovery and reconstruction in Haiti face major challenges, not least of which is the threat of additional disasters. Haiti is in a major hurricane zone. In 2004, 3,000 Haitians died from Hurricane Jeanne. Furthermore, some seismological evidence suggests that the 2010 earthquake relieved only some of the pressure building up in the tectonic plates. In August 2021, another major earthquake hit Haiti, causing at least 2,200 death. These frequent extreme events make Haiti's long-term recovery much more difficult: just as it starts to get back on its feet, it gets knocked down again. This is one reason why Haiti remains the poorest country in the Western hemisphere.

Even when there are no specific extreme events that could happen anytime soon, there are steps that we can take to increase our resilience. These are generally long-term projects to enhance our physical infrastructure, our awareness, and other steps that will be useful to have in place when an event does occur. For instance, we can develop and enforce building codes requiring that buildings be able to withstand earthquakes or high winds. We can stockpile certain supplies to be available in times of need. We can develop insurance schemes to help each other recover from damages that occur. We can design and install warning systems to alert us to extreme events that may be about to occur. And we can study natural hazards so that we know how to prepare for and respond to them when an extreme event occurs.

Increasing resilience to natural hazards often requires a detailed understanding of the hazards. In the Penn State Department of Geography, several researchers are active in improving our understanding of hazards and in helping communities use this understanding to reduce their vulnerability and increase their resilience. Emeritus Professor Brent Yarnal studies the vulnerability of coastal communities to storm surges from hurricanes. Hurricane storm surge is an increasingly important issue because, as we will see in Module 9, climate change is causing sea levels to rise, making storm surges more severe. Professor Yarnal and his colleagues work directly with members of coastal communities, both to learn from their experience and to share research insights with them so that they can be better prepared for future hurricanes. This community engagement is seen in the photo below, showing community members in Sarasota County, Florida, planning land use so as to reduce vulnerability to hurricane storm surge. Note their use of maps to visualize the vulnerability of specific places! In general, university researchers and community members bring different perspectives and different resources to the table. By working together, we are able to better prepare for natural hazards. 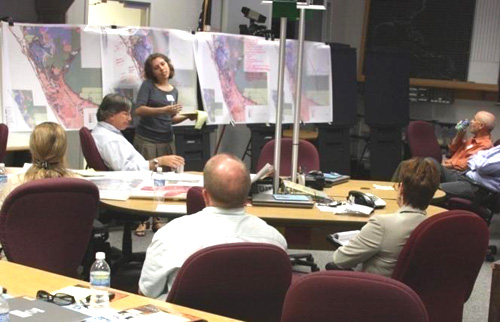