As mentioned in the introduction to this module, ethics is probably a familiar idea - things that are good or bad, right or wrong. We encounter situations every day that requires ethical thinking in this general sense. But ethics can also be defined more specifically as a framework for assigning value to things and making decisions about how to act in response to these values. As you will learn throughout this module, the general definition of ethics is very much based on the specific definition, and it is this more specific definition that we are primarily concerned with in this lesson. 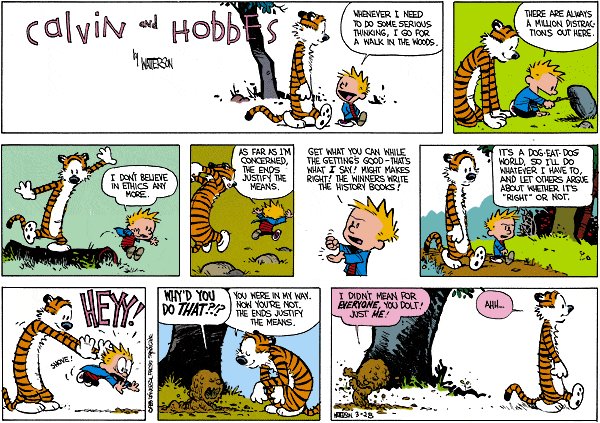 Figure 3.1 The Ends Justify the Means. This comic strip is classic Calvin and Hobbes (who are named after two philosophers, by the way), and its humor helps illustrate the importance of ethics to social and human-environment interactions.
Click link to expand for a text description of Figure 3.1

Calvin and Hobbes Cartoon.
Calvin & Hobbes are walking along and Calvin says “Whenever I need to do some serious thinking, I go for a walk in the woods.
Calvin, poking a stick at a rock says “There are always a million distractions out here.”
Calvin and Hobbes continue to walk and Calvin says “I don’t believe in ethics anymore.” “As far as I’m concerned, the ends justify the means.” “Get what you can while the getting's good. That's what I say. Might makes right! The winners write the history books.” “It's a dog-eat-dog world, so I'll do whatever I have to and let others argue about whether it's 'right' or not.”
Hobbes pushes Calvin into the mud and Calvin yells, “HEYY!!” “Why’d you do THAT?!?”
Hobbes says “You were in my way. Now you're not. The ends justify the means.”
Calvin says “I didn’t mean for EVERYONE you dolt, Just ME!”
Hobbes, walking away says “Ahh..”

Your first response to the question 'what is ethics?' might be that ethics are your moral standards that come from your religion or cultural values. And that's true. Ethics is also one of the major fields of philosophy - frequently called moral philosophy. Over the centuries, the line between categories such as 'cleric,' 'religious thinker,' and 'philosopher' have not been easily drawn, and you might be surprised to know that many of the ethical positions that you intuitively hold are based on the work of philosophers that produced their theories centuries ago. Your notions of right and wrong behavior can likely be traced to Thomas Aquinas and Immanuel Kant; your ideas of fairness, justice, and rights are at least partially formed by David Hume, Thomas Hobbes, and John Locke; even your beliefs about the qualities that constitute a 'good person' are heavily influenced by the work of Aristotle. And that list only includes Western philosophical influences!

There are three major areas within the field of ethics: metaethics, normative ethics, and applied ethics. For this course, we are primarily concerned with normative ethics, which is the branch of moral philosophy that is concerned with identifying and justifying ethical actions. Philosophers working on normative ethics focus on identifying and defining what constitutes right behavior for humans. This includes not only discussing the behaviors themselves, but also the justification for what makes the behavior right - the foundation of ethics. We will focus in on more of the specifics of normative ethics in the next section of this module, but for now let's move on to discuss value, which is at the heart of ethical foundations.

Formal ethical viewpoints are based on logical arguments in support of certain actions. These are essentially rules for right behavior. Like all good rules, moral philosophers support their arguments with some type of evidence that serves as the foundation of their position. Ethical arguments weigh the merits of moral decisions based on the relative value of parties involved in the decision. In ethics, there are two types of value: intrinsic value and instrumental value.

Instrumental value is the value a thing possesses because of its usefulness to humans (or some other thing with moral standing). This is sometimes also called use value. A forest, for instance, has instrumental value to humans because it provides raw materials, a place for recreation, or perhaps some ecosystem service like carbon cycling and storage. This usefulness can and is considered in moral decision making, but it does not warrant moral standing. The intrinsic value of non-human things like forests can be a powerful motivator for conservation. However, it is also often used as justification for resource extraction that can degrade the environment. And the lack of moral standing also leads to the justification of environmental degradation because the value of human life and well-being is said to outweigh the negative impact.

Earlier we noted that the lines between religion and philosophy are not always clear, and there are some ethical theories that are justified by religion or appealing to a higher power (Natural Law theory, for instance). These are fascinating theories, but in this course, we will focus on ethical theories that base their argument on other lines of reasoning. This does not discount those theologically influenced positions. Rather, it is based on the fact that secular ethical frameworks are much more prevalent in modern thought. And in this course, we are less concerned with the ultimate source of moral authority, and more focused on understanding how differing ethical positions influence human-environment relations and cause conflict over sustainability planning.

Remember in Module 1 when we discussed the value of social science perspectives in a course on sustainability? About now, you might be asking the same question about ethics: why are we studying ethics in a class about sustainability? Isn't that about science? The simple answer is that sustainability is about science. But let's ask another question: what is science, anyway? Another simple answer is that science is the study of the world around us through observation and analysis.

Often when we use the word 'science', we are referring to the physical sciences that focus on the non-human world. And we assume that science is objective - just the facts based on observations. The truth, though, is that how, where, and when we make our observations greatly influences what we find. And those decisions are made by humans that instinctively make value judgments that are informed by their personal experiences and ethical viewpoints. Likewise, analyzing scientific observations and making sustainability policy based on that analysis is inherently influenced by ethical viewpoints.

Sustainability is about science, but it is also about people, and wolves, and trees, and ecosystems. That makes it very much about ethics, too. In the next section, you will learn more about normative ethics, and how they can and do influence debates about sustainability.

The scientific method that is considered the bedrock of modern science and knowledge was actually developed by late 16th Century empiricist philosopher, Sir Francis Bacon.