Cost control includes monitoring cost, task completion, and time. If the total cost of a project at a given time is over the cost baseline, cost control measures may be necessary. Such project management actions may range from ensuring that only tasks within the scope of the work are being performed to alerting stakeholders of potential cost overruns. As a project manager, it is important, professional, and ethical to identify and report on these issues as soon as they are identified. Effective techniques exist to help you in this matter.

Earned value management (EVM) is an effective technique for tracking costs and examining project expenditures relative to completed work. Its strength is that it looks at cost, time, and task completion within the scope of the project simultaneously. It uses a WBS and budget created during the development stage, but tracks these metrics during the implementation stage of a project life cycle. The basic measures in EVM are explained in Figure 6-1. 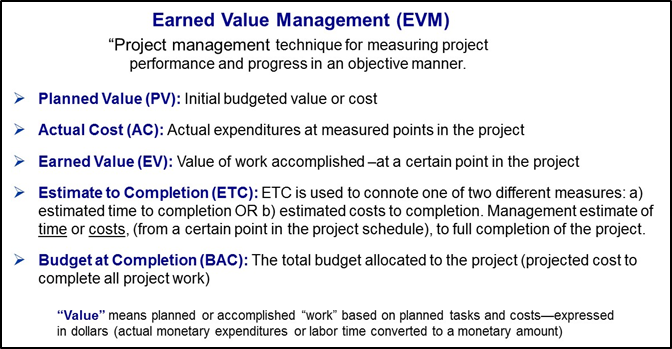 This figure is mainly text and explains Earned Value Management concepts. The title, centered at the top with a centered text, reads, “Earned Value Management (EVA)”. Below this title line is a text explanation below the title with the text, “Project management technique for measuring project performance and progress in an objective manner”. Bullet points below this text lists the following five left justified bullet points defining key EVA terms:

A definition of “Value” is shown at the bottom.  Value means planned or accomplished “work” based on planned tasks and costs—expressed in dollars (actual monetary expenditures or labor time converted to a monetary amount) 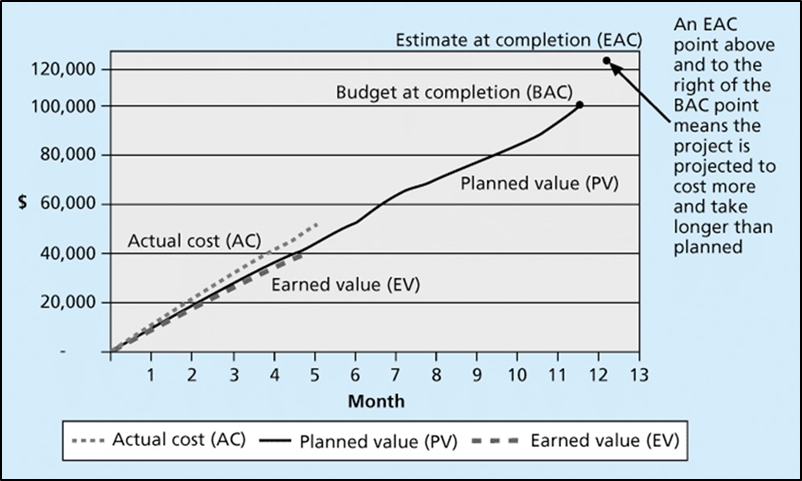 Figure 6-2: Earned Value Management (EVM) Concepts. Shows analysis after project duration of 5 months.
Click for a text description of Figure 6-2: Earned Value Management (EVM) Concepts
This figure is in the form of a line graph that explains the concept of Earned Value Management (EVM). The Y-axis represents the project budget in dollars and has a scale that goes from $0 to $120,000 in increments of $20,000. The X-axis represents the project duration in months, with a scale that goes from 0 to 13. The graph presents EVM measures computed at Month 5 of the project. The graph shows lines for three EVM measures including: Actual Cost (AC) with a dotted gray line, Earned Value (EV) shown as a heavy dashed line, and Planned Value (PV) shown as a solid line. This Planned Value line begins at the graph's origin and moves up and to the right, ending at Month 12. The end of the PV line is labeled, "Budget at Completion (BAC) which is $100,000. The Actual Cost (AC) and Earned Value (EV) lines move up and to the right and slightly above and slightly below the PV line, respectively. The AC and the EV lines stop at Month 5 (the stated point in the project for the EVM analysis). There is a point symbol at the extreme upper right corner of the graph (above the $120,000 Y-axis line) with a text note that reads, "An EAC point above and to the right of the BAC point means the project is projected to cost more and take longer than planned."
Credit: Schwalbe, Information Technology Project Management, 8th Edition. Used with permission by Cengage Learning.

Another way to express this is that the value your team has earned is below the value that you as project manager planned. If Tasks 1, 2, and 3 are 90% complete after four weeks, you have earned 90% of the value you planned to earn. Earned value--the value of the tasks completed, can also be graphed on the same chart. In this bad news example, the earned value line would track beneath the planned value line. Because multiple tasks may be occurring simultaneously within a given project, it is necessary to track actual cost and earned value for all tasks to accurately access the earned value of the project.

EVM is important in that it synthesizes the planning, executing, and controlling process groups of project management. EVM is impossible without a project plan with a detailed WBS and budget. EVM also requires regular tracking during the implementation phase of the project life cycle. It can identify problems or issues early, when intervention or clarification from the project manager can be most useful to team members. It can be an aid to project managers required to file status reports. It is an important control management tool that a project manager has at her disposal during the critical part of the project life cycle when work is being completed.

A summary of important EVM project performance measures is provided in Table 6-1 below.